It's a well-known fact that India is blessed with an abundance of musical talent. A steady stream of talent flows from every corner of the country, but most of this talent gets lost due to lack of exposure and opportunities. Pauline Warjri seeks to correct this loss through her choir group — Aroha.

Meghalaya the 'abode of clouds' and the rest of the seven sister states in the Northeast have musical talent bursting at their seams. Pauline grooms and nurtures these talented youngsters to express their talents to the fullest extent.

Pauline Warjri is a composer, arranger, songwriter, pianist, singer, conductor and above all a music educator. She's the founder-conductor of two choirs – Aroha Choir and the Aroha Children’s Choir. Pauline Warjri holds a licentiate from Trinity/Guildhall School of Music, London, and has decades of experience in the field — so it was a natural progression for her to also found the Aroha school of music. 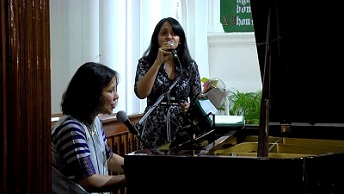 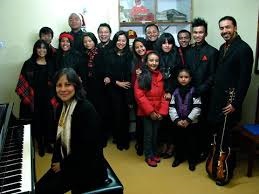 Pauline's passion for teaching was very evident from childhood. She fondly recalls two anecdotes that illustrates her passion for teaching: as a three year old child — she once held up a ruler and did not allow visitors to leave her house until they recited the letters of the alphabet, and in another instance, she was once invited by the rotary club to teach them the anthem. Twelve year old, Pauline, took this invitation very seriously and proceeded to ask the crowd to stand up straight and be quiet while she was teaching. She even chided a man who kept talking — by boldly exclaiming, "sir, please keep quiet." He turned out to be the inspector general of police much to the amusement of everyone.

Pauline believes in a holistic approach to teaching music, which demands a lot of discipline from her wards. This has been her biggest challenge. Pauline feels the lack of punctuality and discipline is ingrained in our national psyche. The rot starts from the top and is imbibed by our children below. Pauline is using music as a tool to stem the rot by instilling the traits of discipline, hard work and punctuality in her students.

The Power of Music

Initially, Pauline used music as a medium to entertain and soothe people, but an opportunity to attend a music convention in Switzerland changed the way she thought about music. The theme of the convention was 'Can artist help to mend a broken world', here they attended a workshop conducted by a renowned music conductor — John Burrows, who taught her how to interpret music. John had used music to heal and rehabilitate his young son who had lost his memory and the ability to use his limbs in a terrible accident. Music had helped restore his son's memory and motor functions. 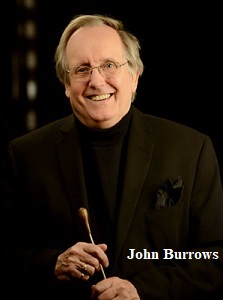 This convention, and especially John's workshop, helped Pauline find her calling as a musician with a social responsibility. She realized she can use music as a healing tool and as a tool to teach human values and respect. More importantly, she recognized that music can be used as a tool to bridge gaps between cultures and social strata.

One of the fundamental aspect that binds Christianity is the firm belief that all talent should be used for the praise and worship of God and for the betterment of humanity. This belief forms the corner stone of Pauline's choir group. Through music, they convey their love for God through praise, worship, and communication of scriptural truths.

The Musical Journey of Aroha

During her early stint in South India, Pauline felt the need for music to be taught in a systematic way for it to be effective. She felt that every concept should be mastered before a student is allowed to move to the next level. To attain this objective, she developed unique methods for each level and every student so that they can learn at their own pace. Armed with this knowledge, she moved to Shillong in 2007 and founded the troika of Arohas — music school, children’s choir, and the senior choir group. 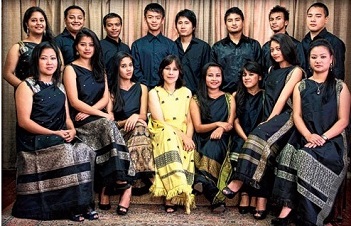 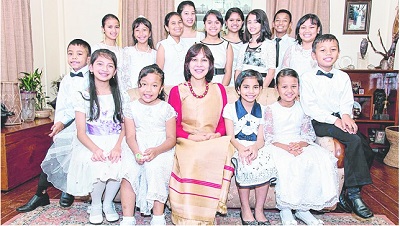 Aroha means “gathering of knowledge” and “the ascending scale” in Sanskrit. The choir group comprises of soloists who specialize in an eclectic mix of genres — Gospel, Western classical, Indian classical, North East folklore, jazz, blues and many others. Pauline binds these varied talents through a common thread of harmony.

From performing at a kick-off fund-raiser for the centenary celebration of a school in 2008 to performing for former Prime Minister Manmohan Singh in 2011 and former President Pranab Mukherjee in 2014 — the choir group has moved from strength to strength. Pauline feels the group has grown as a family while touring. They have learned to love one another, accept each other's weakness and get inspired by each other's strength.

Touring internationally as a group involves a lot of expenditure, they raise money through food festivals, concerts, radio and television programmes. Currently, the Aroha Junior Choir is taking part in the 71st Choral Competition in Llangollen, Wales. They hope to put India and the Northeast region on the world map by winning such international competitions. International recognition will help them attain their end goal of using their music to raise funds for charitable causes.

Regardless of the accolades and competitions they win, Pauline's philosophy on music has always been simple: “I teach the kids to sing in the worship of God. It is a dream come true and a great opportunity to showcase God’s gift”