Toys are part of every child’s growing up and Pandya’s mother once bought a Dholki for him to play with (Dholki is a percussion instrument normally played at Punjabi weddings), which some street sellers sell too. He is without a doubt a born music prodigy with nimble fingers could get his rhythm right. When his grandmom sang Bhajans and devotional songs, he would just pick up any utensil from the Kitchen and try and keep the beat and rhythm. The family was overjoyed with this little master’s skill and the music lovers were actually in awe of him. This was when he was probably just about getting steady on his feet.

His parents Atul and Veena waited no more and immediately started on his Tabla classes probably when he was just one and half years. Whenever they played classical/ instrumental music he was so attentive and enjoyed listening to them. One is aware that playing techniques are not easy and involves extensive use of fingers and palms which this boy had no problems at all and not much teaching was required. His masterji was so impressed with his skills and said that this kind of talent is very rare. 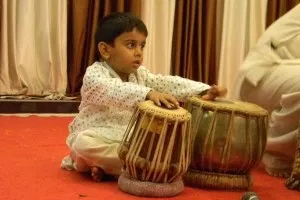 Waiting to enthrall the audience.

He was barely two years old when he gave his first big performance at Somaiya College. Before this, he used to practice and perform for his family and friends at home and his school as well. Then on he is being invited to perform at the weddings, events and sure to reach 100 performances soon.

Received Bal Kala Ratna Award by the All India Radio. He made his entry as the youngest professional Tabla artist in the Guinness Book of World Records when he was 7 years old. He has to wait until he is 12 to be in the Limca Book of Records as entries are not accepted for kids below 12 but his father is not perturbed as he says Guinness is so precious and prestigious. He says probably the best award is when the audience applauds and appreciate his performances.

Quite commendable for the parents.

He is certainly an inspiration to the little ones who want to take up music. His parents took the initiative to nurture, encourage, provide the right guidance, right environment, moral and financial support and they say they have to continue doing this to help their son to reach higher goals.

Bookofachievers.com congratulates him and his parents and hopes to keep updating about this little music prodigy.