Wrote a book during the lockdown and made it the best seller. Meet the girl of 9 who made it to Amazon's Top 10.

9YO Sishu Griha student beat the Pandemic boredom by writing a 110 pages book with her own 30 illustrations. Listed on Top-10 on Amazon.in An avid reader.
By: swetha_vangaveti
Published: 1 Years Ago
Last Modified: 8 Months Ago
Read time: 5 min read
Views  56

What does COVID-19 pandemic mean to you? What changes has lockdown brought to you? If it's not school or office, what kept you engaged during this pandemic? Cooking videos on YouTube, online games, household chores, binge-watching movies and series are the most common answers we have been listening to. But there's a little girl in Bangalore and she, like all of us, remained at home as her school was shut. But, she didn't get into playing or pestering her parents, she did something so the world started looking at her. This is the story of Kavya Kompella, a 9-year old girl from Bangalore who carved a life-changing niche for herself.

An Adventure That Emerged Out Of Boredom:

The way the whole world is securing itself against the dreadful virus, a nine year-old Bengaluru girl also was locked in her house. No school, no friends, no playground, no park, no outings. Just the house, house, and house alone. Wake up, go around the house, talk to mom and dad, eat, drink, sleep, and repeat. This routine gave her immense boredom. All it took for her to do a little bit of studying was just a few hours in the day. And the rest of the day was spent in humdrum. So, looking at her turning weary, her father Kashyap Kompella who works in the industry of Artificial Intelligence, advised her to write something out of her imagination.

And BOOM! Kavya fuelled her imagination and created two characters, Neel and Nina. She then gave them a pet dog Nibble. What next? Kavya went on to create a unique boarding school, Fungalore, that allowed children to bring their pets and has sent Nina, Neel and Nibble to the boarding school where there are many other students who came along with their pets. There, they find Chatter, the talking parrot. The children, along with their pets nosedive into a world of adventure and enter an enchanting world of fairies, pixies, witches, and wizards. It is a 110-pages book and comes with 13,000 words. The book has 30 illustrations done by Kavya herself including the cover page. This book combines magical realism and scientific fiction with the backdrop of an exciting school life. And the title - "The Three Adventurers at Fungalore'’. 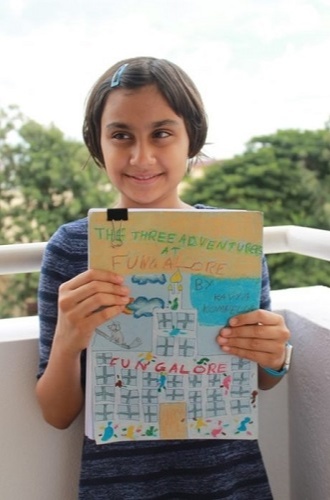 An Ardent Lover Of Books:

This ingenious kid who was born to the book lovers Kashyap Kompella and Divya Kumar, finished her 3rd Grade in Sishu Griha School, Bangalore and is an avid reader. She ponders over mystery, fantasy, and adventure books. The girl started reading since she was 6 and read so much that her parents sometimes have to forcefully send her out to play. Her favourite authors include Enid Blyton, Jeanne Birdsall, and Roopa Pai. The parents knew that the child is an avid reader but when they saw the girl penning one chapter after the other as soon as they asked her to create one, it came as an outright surprise to them.

Know More About Roopa Pai and Her Books

"The Three Adventurers at Fungalore" is a fun-filled fantasy adventure book. It was released online on July 15th 2020. And for about two weeks that is until July 30 it was featured in the best-selling list of Amazon India in the Children Adventure section without any marketing. You will go jaw-dropped if I say that there are no other new authors in the Top 10 list. The top 8 ranks are bagged by J K Rowling, the next 10 are taken by Rick Riordan, and the next 10 by Geronimo Stilton. This book, to everyone's astonishment, broke all those ranks.

Fungalore is a notable children’s book for Kindle according to Amazon India. The book also gained place among the hot new releases on Amazon USA, UK, and Germany in the Children's Adventure category. Due to the pandemic, the book was not published in the print edition which shall be achieved once the situations get back to normal. For now, the edition is available online Amazon.in at Rs.99 and at $4.99 in the USA, UK, Australia, etc. Isn't it a matter of pride that a little girl from India found her place alongside eminent authors like J.K Rowling and Rick Riordan?

“I couldn’t go outside and play with my friends and I finished reading all my books at home but still left with a lot of time. So, I started writing a story about two kids and a dog going to a new school. It was so much fun that I continued writing and it became a book,” Kavya said.

No, Not Just Books Always:

Kavya is not just a bookworm. She loves to draw, has participated and won in many drawing competitions. In fact, she has made all the illustrations she presented in the book herself. With her amazing drawing skills, she brought her imagination into life.

The book received wide acclaim especially from the young readers and was applauded by the critics too. The book was praised to skies for its writing style, humour, creativity and illustrations.

"One loves the small verses Kavya has coined, mouthed vocally by a pet parrot”, states Usha, an eminent book reviewer.

"It is not just a fantasy that catches your eye, but the scientific temper that laces the adventure. One wonders…one is stunned at the wild imagination of this little author as she writes about the contraption the wicked Wizard Vixil had designed in his world of Worgic and also the dialogues uttered”, says another reviewer.

When this little author was asked about her favourite genre, she said that she doesn't know the meaning of the word genre. Aww!! How innocent!! Kavya already started making her mark in others’ lives. Inspired by her, her classmates also started writing. Many more young talents to come then! Let's wait!

This happy-go-lucky adventure novel with super cool pets and super active kids is definitely something that people need in times of distress. When the world is filled with negativity, this little girl's book is surely a reason to rejoice. Go grab your chill pill today! Bless you baby girl! 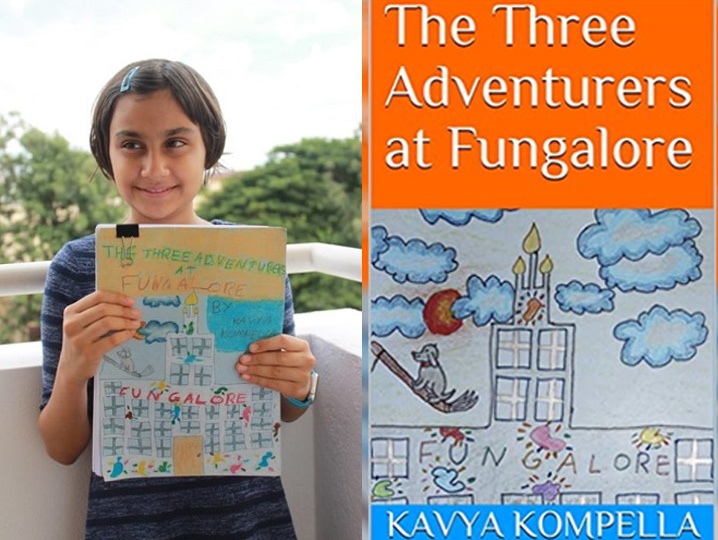