Meet the author who promotes the significance of co-existing with creatures through her fiction.

An Engineering graduate. Serpents were part of her growing up years. Understood the man and animal conflict and made it as a subject in her debut novel.
By: swetha_vangaveti
Published: 2 Years Ago
Last Modified: 2 Years Ago
Read time: 5 min read
Views  51

Apparently, what you love shall reflect in everything that you do. If you are an ardent lover of animals, you wouldn't have the tolerance to someone hurting them. If you are a foodie, your everyday routine shall surely incorporate into it, a variety of tastes. Most of the times, you shall collaborate your work with what you love and admire. Your talks, actions, and plans are sure to reflect your interests. Same is the case with writers as well! Their works depict their mindset and their stories speak about their inclination, at least in 90% of the cases. One such author who showcased her love for nature in her writings is creating new waves in the realm of fiction. She is Sudeepa Nair, a writer of fiction and this is her journey.

The Creator of Creative Interpretation:

Sudeepa Nair who is originally from Kerala lives in Singapore along with her husband and daughter. She graduated in Engineering, further went on to pursue a Masters in Business Administration and secured a job in the corporate sector. However, closed cubicles and pressing deadlines didn't appeal to her much and she quit the job to embrace her love for writing. What was just a co-curricular activity in her college days became her way to make decent money and eventually turned her into an author. Her leads to writing are drawn from the locales and surroundings. She is an ardent admirer of nature who enjoys every bit of flowing air and running waters, loves animals and admires the greens. The life in the metropolitan cities is often talked about without leaving behind the fragrances of her nativity that emerge from the god's own country, Kerala. Thus, her writing style is a combination of mythological elements and fictional characters with a tinge of eco-understanding.

Mythological fiction, when combined with the cause of protecting nature often throws light on problems that need addressing. Though mythological and fictional elements don't have an existential base, they still stand strong in real-time scenarios when they are delivered to convey a cause. Sudeepa Nair's debut novel "Serpents of Kanakapuram" does exactly the same. 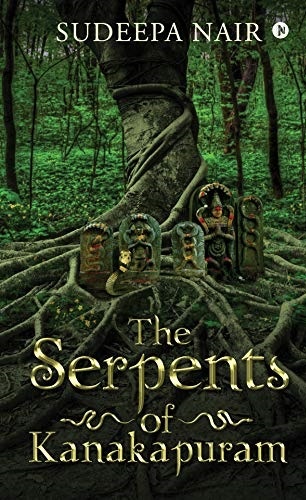 It lays focus on the importance of conserving and building sustainable ecosystems. The plot revolves around the ancient folklore that leads to the emergence of traditional "Sarpa Kavus" in Kerala. The book is a fusion of elements of nature, ecological parameters and the relationship humans hold with the creatures around them. This book drives the readers to think about the relationship between the various inhabitants of the environment. The theme for the book was derived from the ideology of "Live and let live". Nair's family had a practical approach to the wildlife and they often went on vacations to their village in Kerala where they happen to visit temples and perform rituals to appease snake gods. Just like every other child, Sudeepa found the stories and myths revolving around these temples and snake gods interesting. These stories and folklores dissolved into her completely and led her to pen her first book. Also, Sudeepa's love for nature set the theme for the plot. Though it is based on ancient tales or revolved around traditions, the prime motive is to convey about the importance of nature protection and ecological balance.

Sudeepa grew up in a region that's fairly populated with reptiles. She grew up in a place where reptiles moved with freedom and she could never imagine a day without spotting a serpent. Being a part of the ecologically thoughtful family, Sudeepa always felt that man is living in conflict with animal, especially the serpents. Thus, serpents became the talk of the pages in her debut work.

Writing - From Hobby to a Vocation:

Sudeepa loved to write since childhood. She participated in co-curricular writing activities in school and received appreciation and awards. Though she was a voracious reader at school, her habit of reading dissolved as she joined a professional course. She read and reread the books she had with her. She pondered over the classics by RK Narayan, Ruskin Bond, Jane Austen or P.G. Wodehouse. She wrote poetry and articles occasionally during her graduation. Though she enjoyed writing articles and was involved in editing a technical magazine in her college days, due to her focus on a professional career, writing went off track. After a few years of corporate life, she left the job and chose a career in writing. When she had her first child, she got some leisure time and started writing blogs. She wrote about her kid and the joy in motherhood. She resumed to work and went on with her career composing articles, white papers, and marketing collaterals, etc. Along with the technical work, the dire urge to write fiction still remained in her. A few years passed and finally, she came up with a full-length book. She took five months to finish the draft and spent seven months in editing and redrafting completing the book in one year. She then approached a literary agent who hasn't responded properly and on top of everything ripped her manuscript apart. After giving it a thorough thought, she decided to self-publish the book.

Taking the Book To People:

Sudeepa took to Facebook to market the book. Initially, friends and family members purchased the book and copies were transferred between hands. She received positive feedback from people and the book received applause from even the first-time readers. Later, as days passed, Sudeepa decided to start a readers' community and thus started her blog, unlike other writers who initially promote their work on blogs and social media and then publish in paperback.

A Word to the Writing Enthusiasts:

Collecting her experiences, Sudeepa suggests the germinating writers read voraciously and write infinitely. She says that a writer's pen must derive its ink from the people and surroundings. Stories that a writer wants to pen, she says, cannot be far from the real lives and people. She advises the writers to think and process their thoughts accordingly. Mistakes happen but they need not be feared.

Whatever you write, whether it's fiction or non-fiction, real stories or fantasies, if it has some idea to convey, it surely reaches people and touches them. The idea being conveyed in the story can take any form but shall ultimately reach the nerves of the readers. If change is expected, aren't you successful as a writer if at least one person takes home something from the pages of your book? Sudeepa Nair's attempt to promote the importance of sustainable ecosystem through her fiction is thus making its way to reach people, making them think and act further. We wish many more such books come up that not only fascinate the readers but also help them think!