A conservationist, parliamentarian, and weaver directed 150 women in a yearlong peaceful dissent against marble mining chose to spare motherland from mining.

The richness embedded within the dense woods of Timor Island is indeed remarkable yet troublesome. Native people in this portion of Indonesia consider their timberland and climate are as basic to their lives as food and air. The Mollo public arrived at their limit in 1996 when two organizations showed up with plans to investigate their most sacrosanct mountain, Bukit Naususu.

That time Aleta Baun, a conservation campaigner, and parliamentarian, guided 150 women for a yearlong peaceful protests demonstration toward marble extraction, agreed, and managed to protect their holy woodland from mineral extraction. Aleta, popularly known as Mama Aleta, is a younger mother of three and a homemaker-turned-activist. With the help of regional leaders, Mama Aleta began gathering local citizens to denounce marble extraction. She and several others have persuaded over 200 residents to participate. They were effective in compelling the extension away from their sacrosanct mountain. Yet, the mining intrigues overflowed in, undermining significantly many trees and many more families. 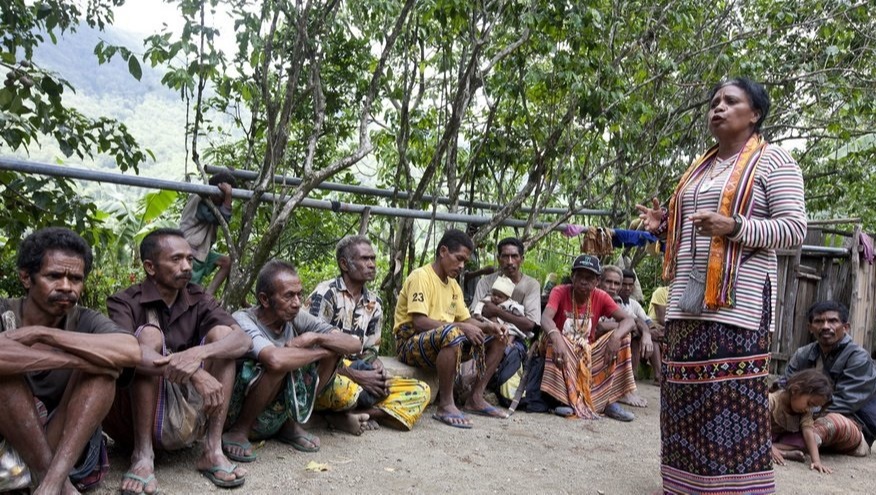 Aleta Baun, born on 16 March 1966, in western Timor, Indonesia. She is an Indonesian environmentalist granted as Goldman Environmental Prize, 2013 for her fruitful endeavours to end the naturally ruinous acts of the mining business in the far off woods of western Timor Island. Driven by Mama Aleta, the natives spent a whole year sitting on marble blocks at the mine's passageway, discreetly weaving their conventional fabric. This extraordinary occupation raised public awareness, and the tension on the mines mounted. Finally, after over a time of the battle, Mama Aleta's development effectively pushed out the mining organizations. 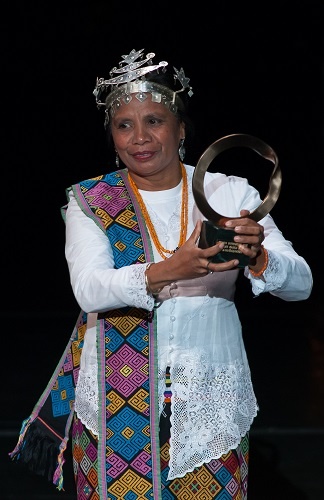 By uplifting women's power and using groundbreaking protest tactics that have rejuvenated conventional cultural values, Aleta's achievements broaden farther than simply keeping mining from pulverizing the ecosystem of its community to strengthening equality for women, administration structures, and financial improvement in her district. Aleta's work offers motivation for what indigenous rights and climate developments can accomplish with energy, imagination, and steadiness.

Backwoods soul and a humble start…

Home for Aleta is the Mollo locale, at the foot of Mutis mountain range on the western portion of the island of Timor. The name Mutis, signifying 'the progression of water', indicates the nature of the mountains. Thirteen rivers flowing from the mountains to support most of Western Timor in solving the purpose of drinking and irrigation water. The Mollo natives depend on backwoods assets for their business needs, including food and restorative items. Organic pigment drains out of these woods used in their customary weaving. The Mollo public has a solid otherworldly association with their current circumstance. The Mollo inhabitants have a deep spiritual bond with their surroundings. For the residents of Mollo, the forest symbolizes the skin, the river as blood, rock as ribs, and trees as blood vessels and hair.

Aleta explains, "If we are isolated from any of these characteristic components, or if any of the components is obliterated, we begin to kick the bucket and lose our personality. Along these lines, we think that it's critical to saving our land."

An impoverished family of farmers raised Aleta. She at her young age lost her mother so other women and older folks in her town raised her.

“Where there is a Will there's a Way”

The native elders explain to Aleta about the traditional values including their spiritual bond that indigenous Mollo individuals have with nature. In 1993, no long until shifting to Soe, Aleta got engaged with Yayasan Sanggar Suara Perempuan (SPP/Women's Voice Foundation), a ladies' wellbeing NGO centred around ladies' contraceptive wellbeing and abusive behaviour at home issues just as women' working rights. With SPP, Aleta has developed community coordinating power and awareness skills, specifically around women's empowerment and medical issues for the vulnerable. As a native female, she acknowledged the challenges plaguing farming areas and had an innate capacity to articulate the problems encountered by residents. 'I perceived how life was for town ladies. They nearly do not have the solidarity to support their privileges as residents', she replied.  Her experience with SPP got her back to Mollo, where she endeavoured to improve the wellbeing of her locale. She figured out how mining was occurring in the Mollo district and the impact it was having on the prosperity of the nearby individuals, both truly and profoundly.

Bending the ribs of the Mollo inhabitants…

In the same way as other of the world's most fruitful spots, the Mutis Mountains are asset rich containing marble, manganese, gold, oil, gas, and numerous different products. During the 1990s, a progression of mining organizations showed up in the workplace of the District Head of South Timor Tengah (TTS), who had the position to give licenses for extractive marbles in his locale, which took in the Mollo area. Mining licenses were given to dig for marble in the stone outcrop complex Fatu Nausus in North Mollo, in the TTS locale. Licenses granted without consulting the local authorities.  The stone in these zones considered to shape the foundation of the Mollo public. Aleta concluded that she was unable to permit the mining to keep on detrimentally affecting her locale. Aleta went to bang door to door and town to town and meet local folks as could reasonably be expected with her message.

As an outcome of collective community involvement activities, Aleta along with three native ladies helped community officials and their families to realize the effects of mining extraction and how that would impact their sacrosanct woodlands and wellbeing 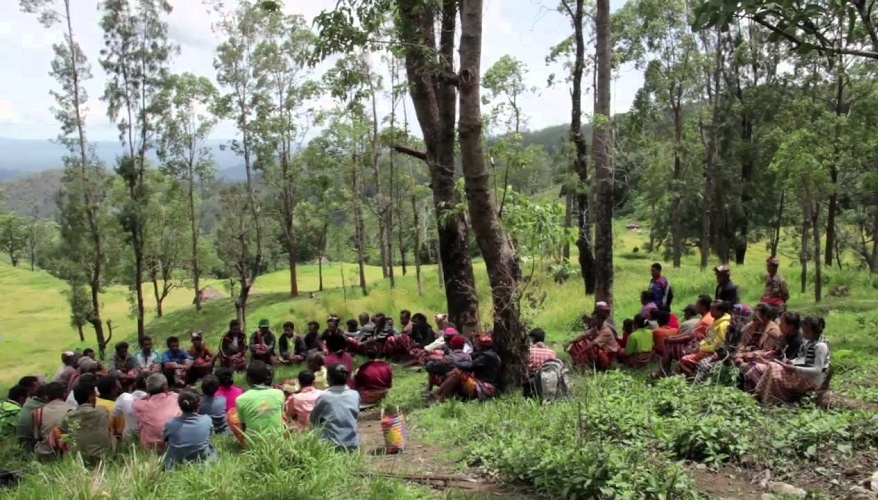 In 2010, the organization halted mining activities

As pressure filled in the network, it turned out to be progressively hard to arrange. In any case, Aleta proceeded with her dissent lastly to figure out how to dissent to the District Head who had given the grant, asking the District Head to give detailed structure concerning mining extraction.

Credit goes to Mollo women for deriving food, dye pigments, and medication from plant sources found in the mountains. The effects of the mines compromised the wellspring of these forest resources. They concluded it was essential to have the women at the front of the obstruction developments, and going about as mediators.

"At the stage where we began our plunge, women realized that they could achieve more to remain steadfast and be heard."

While women fought at the mine, the men offered help by cooking, cleaning, and taking care of their youngsters. Whenever, women stayed at the mine yard, calmly weaving their conventional textures. 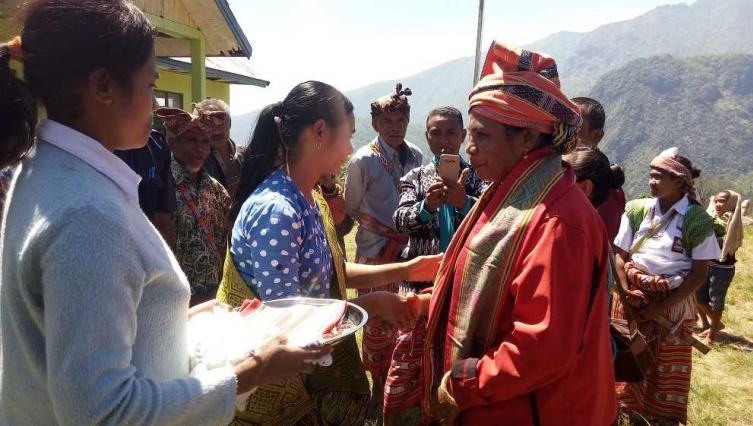 All well, that ends well!

In 2014, Aleta elected as a member of parliament for the NTT provincial legislature for five consecutive years. In her part as a parliamentarian, Aleta emphasized maintaining the ecosystem services of the NTT, such that farmworkers who are dependent on freshwater and rich soil can proceed to market their business. To raise three children, Aleta at present is following her goal by attending university to pursue graduation in law from university at Kupang.