Its become a Bicycle frenzy community and its a great way to control pollution and stay fit too.

He belongs to Chennai but moved to Hyderabad. Decided to promote cycling culture in Hyderabad. Chosen as the Bicycle Mayor of Hyderabad by Amsterdam agency.
By: swetha_vangaveti
Published: 1 Years Ago
Last Modified: 1 Years Ago
Read time: 4 min read
Views  25

Pollution - the biggest problem the earth is facing today. With the advancement of technology and with the rise in globalisation, though lives became easier to live, it turned harmful to the environment. This in turn started affecting lives - a cycle. The environment started showing her dark side when humankind gave her the worst out of their development. Once this revolution from nature's side started, humans began to realise the mistake they have done and this led them to immerse themselves in taking corrective measures. Carpooling, using public transport, switching to a sustainable way of living, going organic are some of the many methods people started following in order to soothe and pacify the damage. One among all these measures is encouraging the use of bicycles for commuting to closer distances. Instead of igniting the bike's fuel to get some groceries from a store next to the lane, why not take a bicycle and pedal it across the street? This way, one can curb carbon emissions on a daily basis. When an Amsterdam-based social enterprise Bycs has chosen Hyderabad's Santhana Selvan as the Bicycle Mayor of Hyderabad, it is for him to take this idea of bicycle riding to as many people as he can and encourage people to pedal more in order to save the environment.

Advocating The Benefits Of Cycling:

Santhana Selvan hails from Chennai. He is an IT professional who works in Hyderabad. He developed the habit of cycling in order to run errands that come on a regular basis. For shorter distances and to pick up or collect things, he always had the habit of cycling. Over a period of time, he came to know about a cycling group and joined them. He would wake up at 4:45 am and go on a bicycle ride with the group. Eventually, he not only became the core member of the group but also started advocating the importance of cycling since then. As years passed, he started using bicycle for most of his commuting instead of just confining it to run errands. In the later years, he moved to Hyderabad.

After Santhana Selvan moved to Hyderabad, he observed that cycles aren't much used for commuting in the city. Very few people use cycles and those will be fitness enthusiasts in majority. To promote the bicycle culture in Hyderabad, he started a community along with his friend Dinesh. This community emphasises not just cycling but also includes other fitness activities like running, swimming etc. This community now has thousands of people in it. “With the rapid growth of the city, personal vehicle usage has increased in the last two decades while public transport has come down drastically. Cycles are negligibly used, though it is one of the solutions for pollution and traffic congestion.”, says Selvan.

Not Just For Low-income People:

In order to convince people about taking their bicycles out, Santhana says that it's not so easy. There needs to be a shift in the conventional mindsets of the people. Santhana says that there's a thinking that stops people from taking to bicycles. They often possess a wrong notion that bicycles are meant for low-income people. He says, “There’s a mental barrier that a bicycle is only for low-income people but it can be adopted for the betterment of the city’s health collectively”. In order to convince people that cycling has both personal and environmental benefits, it is surely a challenge. To handle this challenge, Santhana started putting forward, petitions to the government to make the city bicycle-friendly as well as to organise awareness campaigns on cycling. 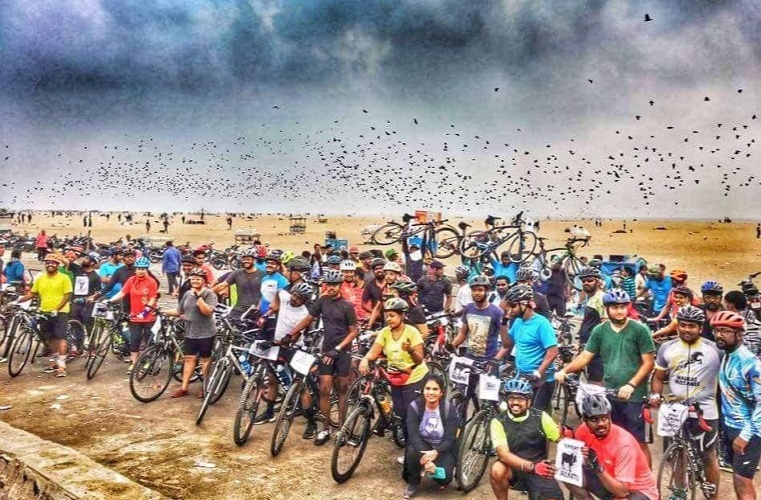 With Santhana's efforts, things are beginning to change. The GHMC has set up two-cycle rental centres in the city besides the Hyderabad Bicycling Club. "It needs to be done in more areas across the city. Metro Rail also has cycles as a mode of last mile connectivity, but it’ll be great if they start at more stations. It’ll be better if the Metro allows cyclists to get on the Metro along with their cycles, the way it is done in some countries", he mentions. For all his efforts, Amsterdam agency, a social enterprise called BYCS appointed Santhana as the Bicycle Mayor of the Hyderabad to promote bicycle culture in the city. 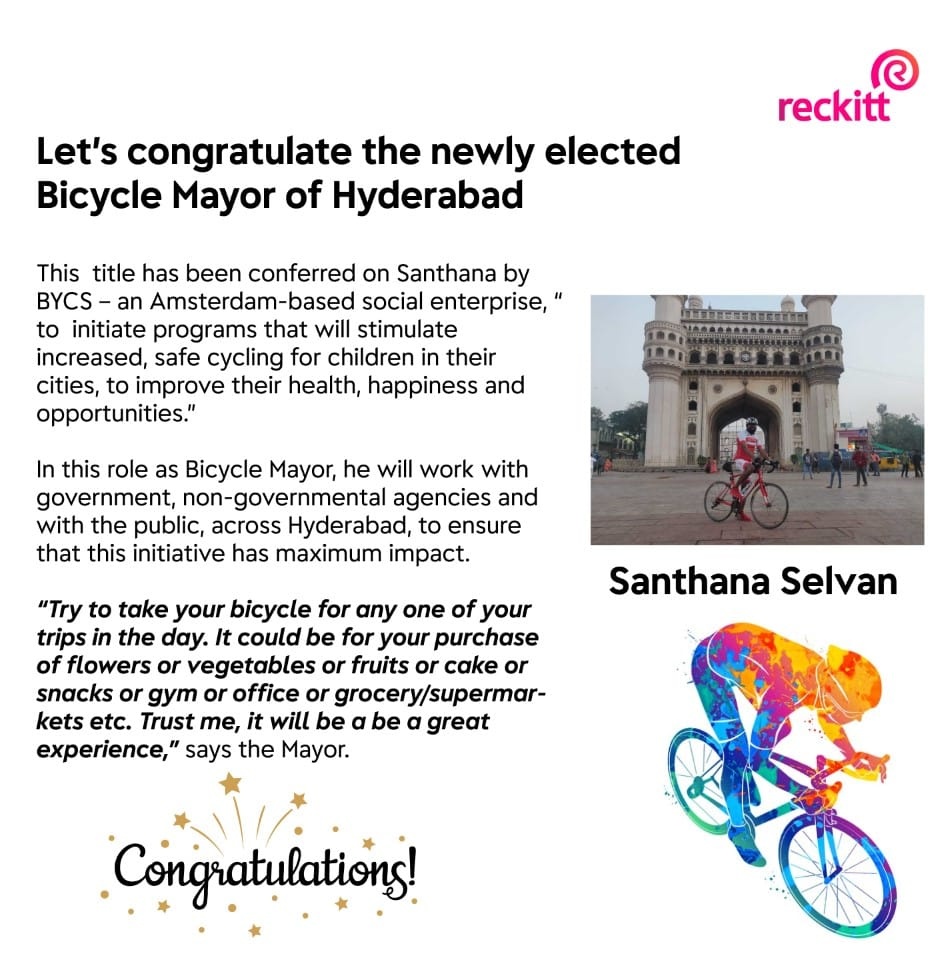 Selvan says that by 2030, their aim is to get Hyderabadis into cycling for at least 50% of their needs. "It is easy to make cycle an active part of your life. Just buy a cycle and use it for a couple of trips in a week, for errands or for commuting to places nearby. It’ll make a lot of difference,” he says.

With his relentless efforts and with the cooperation and support of the members of his community, may more cycles find their way on the city roads. Many people realise that cycling is not a matter of low prestige but is of high value and significance.