K2K Bicycle Rider completes one of the longest journey to also inspire others to ride a bicycle.

When 17-year-old Om Mahajan from Nashik cycled from Kashmir to Kanyakumari and emerged as the world record holder for the fastest Kashmir to Kanyakumari journey on cycle, clocking a time of eight days, 7 hours and 38 minutes, little did he know that he is standing as an inspiration to someone passionate of cycling? Recently, when Adil Teli from Kashmir said that he observed Om's route and learnt how he rested during his journey, it's evident how inspiration works. Kashmir's 23-year-old Adil Teli went on to break the world record set by Om Mahajan and has now become the one to have completed the journey from Kashmir to Kanyakumari in a record time of eight days, 1 hour and 37 minutes. He says that the gruelling journey is also wonderful and memorable.

A Proper Goal And A Committed Try:

In December 2020, Adil, who hails from Narbal in Kashmir's Budgam district, submitted his application for a pedalling feat from Kashmir to Kanyakumari to the Guinness World Records and got it approved in March 2021. He trained rigorously for five months in Amritsar, Punjab and used to cycle for 250km three times a week to build his strength. He started his journey from Ghanta Ghar at Lal Chowk in Srinagar around 7:30 am on 22nd March and reached Kanyakumari around 9 am on 30th March. Flagged off by the Divisional Commissioner Kashmir, Pandurang K Pole, his trip was sponsored by Abraq Agro, a controlled-atmosphere storage facility company from Kashmir, which sponsored the entire journey. “I come from a middle-class family, I could have not achieved this if I didn’t have the sponsorship. Thanks to their efforts, be it providing support staff or equipment, I could focus on my goal without worrying about the rest,” he said. 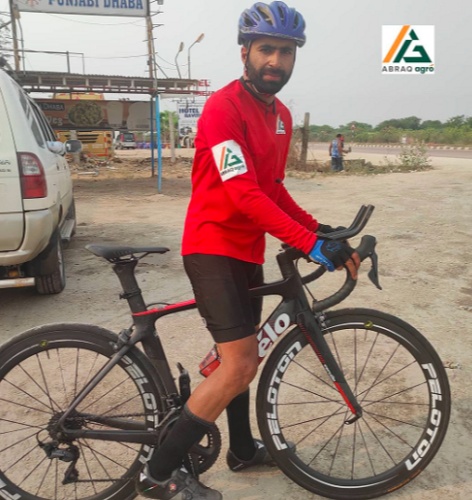 During his journey, Adil covered major Indian cities like Delhi, Agra, Gwalior, Hyderabad, Madurai, among others and ended his journey in Cape Comorin, on India’s southern tip. "Ever since I started cycling professionally, I wanted to achieve this world record. And it took me some time to get there but I’m so glad I could do it,” he said to a release over the telephone. He also said that he pedalled for about 20 hours every day with a strong desire to break the previous record by a wide margin. For this, Adil has designed his own strategies. He studied Om Mahajan's route and carefully observed how he rested. He then realised that he needs to reduce his break time so he can beat Om's record. Adil this took power naps in between his physio sessions. Adil was accompanied by a team of eight members that included a physiotherapist, a nutritionist, a mechanic and a camera crew throughout the journey. "This journey will always remind me to keep pushing myself beyond expectations. I got to know my own capacity once I finished this wonderful, stressful and enjoyable ride. But every pedal was worth taking all the risks,” he said in an interview. Previously, Adil had also created a record for being the fastest cyclist to cover the high-altitude journey of 440 kilometres from Srinagar to Leh in just 26 hours and 30 minutes. It could be the spirit of his old record that pushed him to raise the bar higher for himself this time allowing him to cover a gruelling distance of 3,600 kilometres from Kashmir to Kanyakumari in eight days, 1 hour and 37 minutes. Adil is now submitting all evidence of his feat to the Guinness World Records for official recognition.

Challenges In The Way:

Speaking about the challenges he faced, Teli said that the high temperature and humid conditions troubled him the most. “Coming from the mountains, I’m not used to hot weather. Here I was riding in almost 40 degree Celsius,” he said. To beat the heat, Adil planned his day. He pedalled mostly in the evenings, night and early hours of the day and rested during the noons while he travelled across NH44, the North-South National Highway in India, the longest in the country. He said that he saw times when he got demotivated due to unbearable pain and thought of giving up. "Every time I thought of quitting, I could see my parents’ faces and tears in their eyes, that kept me going,” he said. He stated that without the love and support of his family, crew and sponsor, this feat would not have been possible.

Marking It For Others:

Adil Teli expresses hope that his achievement inspires more people, especially the younger generation in the state. “Interest in cycling is developing in India a lot in recent years and hope more and more people take this up. Nothing is impossible if you put your mind and heart into it. In cycling terms, I ‘emptied the tank’ to achieve my dream,” said the K2K rider.

Hats off to the young man who made his dream come true with resilience and will power, not looking back come rain or sunshine.