A techie who is transforming the face of Indian Youth through " India's Future Foundation".

Saw the living conditions of the poor and the lower middle class closely. Worked to set a decent living for everyone. Karmaveer Chakra awardee's unique journey.
By: swetha_vangaveti
Published: 1 Years Ago
Last Modified: 1 Years Ago
Read time: 7 min read
Views  66

When you work for a cause, thought and action must go together. Reverence for nation is not singing the National Anthem or talking about nation's development on Independence day. True love for nation is when we work for its betterment every day. It all starts with one person, one thought and one step. One such person who took that one step towards a better society is Venkatesh Gereti. If words could inspire a person, then Venkatesh is the best example for having got inspired by the words of Jayaprakash Narayan, the founder of Loksatta party. Who is Venkatesh? What has he done for a better India?

A Techie's Attempt To Revive The Indian Youth:

Currently working as a techie in Cologne, Germany, Venkatesh grew up in an environment where he closely observed the lives of the poor and the below middle-class families that struggled to make a living. A strong foundation to his future years were laid at the AP Residential School, Kota. To fund his essentials like clothes and school uniform, after his class VII, he took up his first summer job at a general store near Tirupati.

I naturally built entrepreneurial and community spirit by looking at people from my village as they were highly inspirational and hard-working, says Venkatesh.

Venkatesh who was born into a poor family of farmers in Nellore, Andhra Pradesh, studied International Business and Development Economics in Italy. He was the co-organizer and speaker at Start-Up Europe Week 2017. Having been influenced by Nagabhairava Jaya Prakash Narayana and joined Lok Satta Party early in his student life. This influence fell on him when he heard Jayaprakash Narayan speak at an event in Nellore. Since then, he became an anti-corruption activist. He has been working for the Lok Satta party ever since then and founded Youth For Better India (YBI), India's Future Foundation, and Swatantrata Center with a vision that this new generation policy think tank advocates socially liberal and economically conservative principles that make peaceful and prosperous nation. 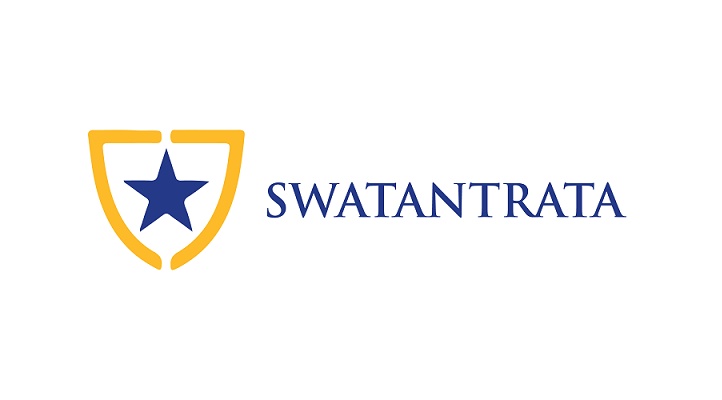 Venkatesh Geriti, an Indian classical liberal, anti-corruption activist, and social entrepreneur is the founder of Swatantrata Center and India's Future Foundation, an educational organization in Hyderabad. 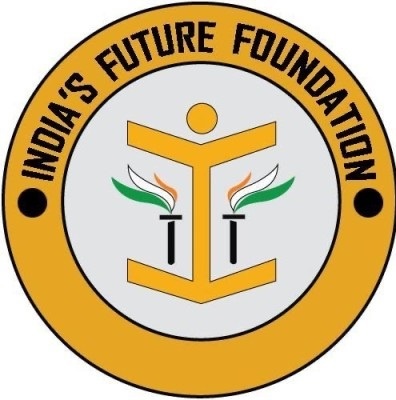 He is also a scholar at Atlas Summit. An alumnus of Foundation for Economic Education, Venkatesh is a member of the Centre for Civil Society. He was an active participant in the Indian anti-corruption movement in the South Indian states of Andhra Pradesh and Telangana in 2011. Venkatesh was one of the founders of Youth for Better India (YBI), an anti-corruption youth organization that educates youth and encourages them towards anti-corruption institutions and governance reforms. 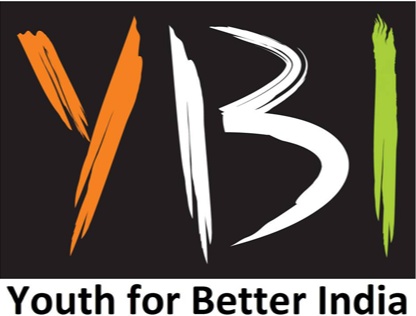 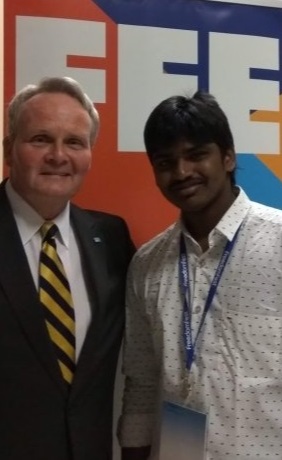 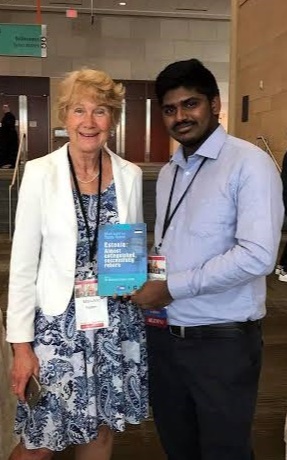 Swatantrata Centre - The Brainchild Of A Visionary Man:

Swatantrata Center that was incubated by Venkatesh Gereti along with Raghavendar Askani, organized Youth parliament Programs, Leadership Bootcamp , Policy meetups , Policy conclaves , swatantrata Yatra and #Swacon. Passing emotional statements about transformation that raise the nerves is easy but walking towards transformation is not. One can only be a part of transformation only if one is fully aware of the happenings around. To create such awareness among youth, who, Venkatesh believes to hold the absolute power to transform the nation's current situation, he initiated Youth Parliament Program. On 2nd October, 2016, Gereti laid foundations for YPP under the able guidance of Jayaprakash Narayan and with the support of Askani. Let's know in detail about the activities taken up by Swatantrata in order to create a better Indian society.

Model Youth Parliament Program is one wing of YPP that connects like-minded people who work for a social cause and the government. Model YPP is a fuel that drives leaders for better India.

Leadership Boot Camp is another significant project that falls into one of the branches of YPP. It focusses on Policy development, Sustainable development goals and Technology. With this, the young generation get an understanding of contemporary policies and reforms.

What's The Outcome Of YPP?

Don't think that the activities organised by YPP are just to train the youth and create awareness among them. Their impact is a million times more than that.

To curb corruption and delayed processes in government organisations, the innovative youngsters under YPP under the leadership of Dr. Jayaprakash Narayan, formulated a bill wherein any government official failing to provide the requested service within the stipulated time frame would pay the penalty for every delayed day to the respective citizen from his own pocket. The Telangana Government, in the process of implementing this bill, has handed over the responsibility of drafting the bill to the Nalsar Law University. The government of A.P has started implementing the Right to Service bill.

YPP student members, the youngsters of India, for the first time are about to submit a bill to the parliament. This first of its kind bill focusses on changes in the education system that has been suggested by over 40k students. Such is the influence of YPP on youth and the outcomes are truly driving the nation towards a positive tomorrow.

Promoting Opportunity For All Individuals:

With an aim to establish individual freedom minimising the state intervention and to inspire, educate and connect the young leaders, a social organisation Swatantrata Center was born out of the inquisitive minds of Venkatesh Geriti and Raghavendar Askani. 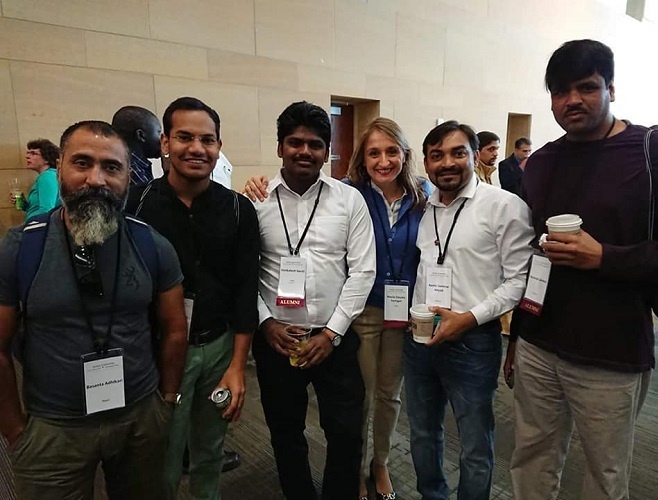 To establish a prosperous society where every individual has a choice and opportunity to lead a dignified life, this people-centric organisation builds the capacity of individuals through digital activism, strives for policy changes through campaigns and advocacy. The organisation strives to create potential in individuals so that they become a valuable asset to the country, grow their own business framing the best policies, and tackling with intractable problems in unique ways. Future leaders, entrepreneurs, policy development professionals are sculpted through a wide range of programs like policy meetups that focus on agricultural reforms, decentralisation and liberal democracy. Policy Conclaves and boot camps are organised that openly speak about the crucial needs of a developing country. Swatantrata Yatra is another social impact program that discusses on various themes like Fiscal Responsibility, Free Enterprise and Entrepreneurship, Decentralisation, and Local Governance. Its aim is to travel across 13 states throughout India covering 20 major cities reaching out to more than 5000 people. Its mission is to connect people with the Libertarians and leading policymakers and co-learn with future leaders who are passionate about nation building. #SWACON is one such attempt which is the largest virtual liberty conference on Human Flourishing in collaboration with South Asian Students for Liberty.

The Shower Of Accolades:

Recognition comes in the form of awards when one steps beyond one's comfort zone to work for the welfare of others. Venkatesh received Delhi Youth Award by India Youth Foundation in 2017 and the Centre for Civil Society listed him in the "20 Years and 20 Champions". He was bestowed with the Karmaveer Chakra Award and the Global Fellowship Award in 2019 from ICONGO in Partnership with United Nations.

Awards are a push to do something bigger. Awards are the confidence boosters. Venkatesh has never taken these awards to his head but remained grounded and rooted to what he believed and worked for like before.

People like Venkatesh Gereti not only lead and mentor but also lay foundations for a fulfilling future creating a sustainable world for the generations to come. May many young people come forward and walk in the path of Venkatesh Gereti taking his thoughts forward and may he continue to lead and inspire. Follow His Blogs For More Updates 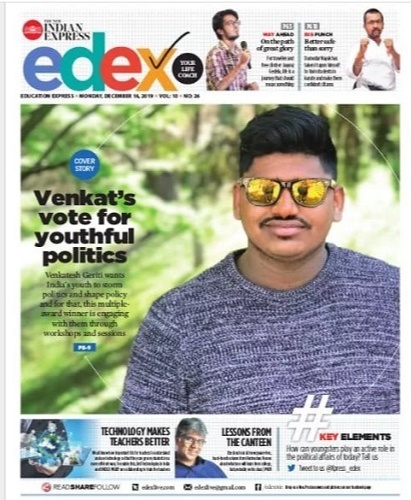