A Tamil Nadu Bus Conductor Yoganathan is making every effort to leave a cleaner Earth for our children. Has planted more than 3 lakh saplings so far.

As a young boy, visiting his mother who worked at the Nilgiri tea plantations while he studied in the Thanjavur district, Mr. M. Y. Yoganathan is first to admit that the flora and fauna had more impact on him than his school curriculum. Appreciative of the hills and their beauty, this young lad experienced firsthand the wrong deeds being carried out by wood smugglers. He even protested against them with flex boards and banners. When he came to live in Kottagiri with his mother, through his interaction with Mr. Jayachandran of the Tamil Nadu Green Movement, he learned about protecting and conserving the environment.

A driver with the Tamil Nadu Transport Corporation, a job that leaves one with no time, didn’t hinder him in following his enthusiastic green dream. He who plants a tree, plants hope.  Pursuing his dream, little by little has reached a number of 38 trees in 26 years.  Does it sound small? No, if each one of us does the same it will do wonders for our precious Earth that we live in and leave a greener earth for our generations to come.  He is living proof that following your dreams, no matter what the circumstances is possible for everyone.

Despite his tight schedule and doing his bit for the environment, he decided to start encouraging others. On 5th June, which is the World Environment Day, he appealed to schools around the state to take an oath to protect the environment and plant at least one sapling on their campuses. Around 5000 schools responded to his request. “About 2000 schools have planted saplings and in 3000 others, students have promised to refrain from using non-eco friendly products such as lipsticks, nail polish, and firecrackers during the festival of Diwali”, said Mr. Yoganathan. 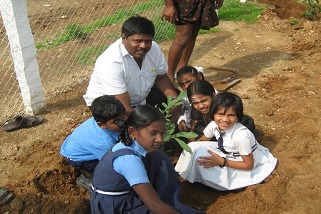 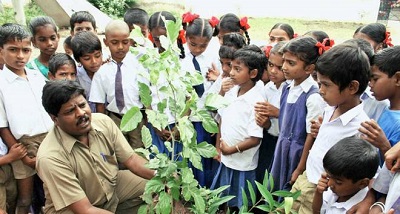 He has a unique plan whilst planting the saplings. “I name the sapling after the person and ask them to treat it as their sibling. For example, if  Senthil is planting a pungai (Indian beech) tree, I name the plant Senthil pungai tree.” He says he opts for indigenous plants as they adapt to the environment easily, require less maintenance and last longer.

What’s so special about this Tree Man?

An ordinary man with an extraordinary vision which makes him special. Despite his hardships as a child where he lost his father when he was just over a year, he strongly felt the urge to protect Mother Earth.

He laments that the children of today share an apathetic relationship with nature, with some not having touched soil during their childhood years. He planted a tree when he was just 11 years old. This is how fiercely and intently he felt about the environment and the timber mafia.  He quit schooling after 12th due to various financial reasons.

Pollution at an all-time high

Pollution is at an all-time high and we might soon start buying air masks.”  “Everyone is busy fixing expensive air-conditioners but no one desires to plant a tree. He is not really angry or anguished but sends a clear warning. He is even critical of Non-Governmental Organisations (NGO). “NGOs have targets-to plant certain number of saplings within a certain time to receive funds. I doubt if they even follow up on the plants. There have been instances where I’ve found saplings still inside their polyethene bags after tree plantation drives by NGOs”. 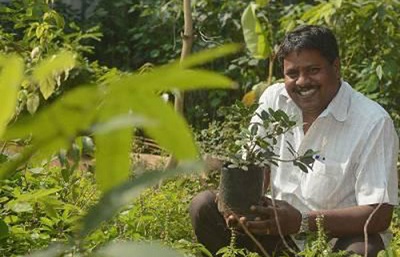 There is enough time if one wants to do something and he loves the challenge. He spends his off-days which are largely Mondays at Schools promoting environmental awareness programmes or at tree planting ceremonies. He has not taken a single day off for his personal use and does take off from work frequently all for a good cause.  This cause has landed him with 40 transfers in the last 17 years of service.

He loves sharing interesting facts about nature and various tree planting techniques with the school children with the help of his projector, which he purchased by taking a PF loan. He says, “It’s lightweight and easy to carry as it weighs only 2.5kilos. The earlier slide projector was much heavier.”

But such dedication and enthusiasm can hardly go unnoticed for long. After he received the ECO WARRIOR Award from then Vice President Hamid Ansari in 2008, his superiors have adopted a more lenient stance towards him. Mr. Yoganathan has also received the Suttru Suzhal Sevai Veerar(loosely translated as Environmental Service Player) Award from the Government of Tamil Nadu and the REAL HEROES Award from CNN-IBN. 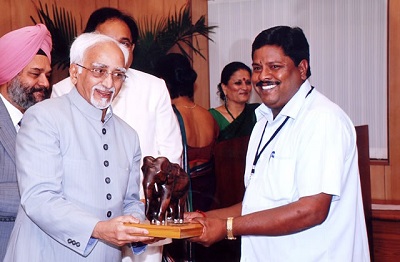 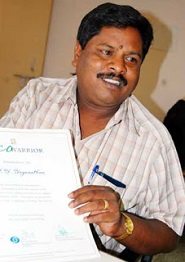 His wife Valarmathi a homemaker and his daughters Monisha and Satyapriya have been his biggest strength & support. Now that he is being recognized,  his seniors are extending a bit of much-needed support.  He firmly says – There has been no support from the government at all, though he hopes.

He is one of the few in our country who can boast about planting over 3 lakh saplings in the past 30 years. What is extremely challenging is looking after the saplings confesses Mr. Yoganathan.

The saplings that he had planted with so much love and care are now grown into healthy trees. He admits that there is nothing more satisfying than watching them grow. While he continues planting he says, he is here to set an example so that many can contribute towards protecting our mother earth. 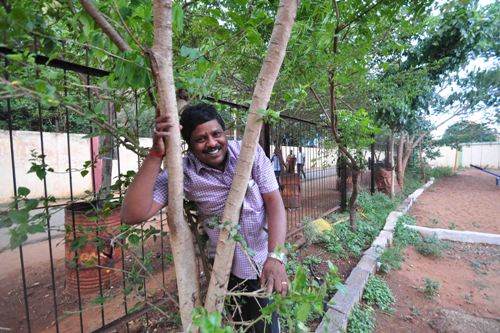 He is such a great example.

But this is not as easy as it might seem as.