Meet the UP man who is driving underprivileged children to school through his unique initiative.

Free School, shift-based classes. Lessons under the Metro bridge and students from the nearby slums. UP man's school that started in 2006 is still a hit.
By: swetha_vangaveti
Published: 1 Years Ago
Last Modified: 1 Years Ago
Read time: 4 min read
Views  43

"The teaching here is good, I like coming to this school. Sir gives work to do and then checks it and tells us where we went wrong,” says Nine-year-old Priyanka Kumari.

"In the Free School, we are assisted in completing our homework and understand what we were taught at school. Also, the time I spend here would have been otherwise wasted in roaming around or gossiping. The school is of great help” says Pintu, who wants to join the Indian Army.

Well, we are not talking about any international school or even a government school for that matter. Surprisingly, it's just a school on roads, under the bridge started by a young man with a vision to provide access to education to the kids of the street. Let's know more about Rajesh Kumar Sharma and his kind initiative.

Idea Born Out Of an Unfulfilled Dream:

In 1989 when Rajesh's family who hails from Uttar Pradesh's Hathras district faced a severe financial crisis, he had to drop out of the first year of college which led to his dream of becoming an engineer to remain a dream forever. This incident shook Rajesh who later settled with a grocery store for his breadwinning. Over a period of time, he decided not to let kids fall prey to poverty and lose access to education. The initiative born out of this very thought is his innovative school that educates the children from impoverished backgrounds. 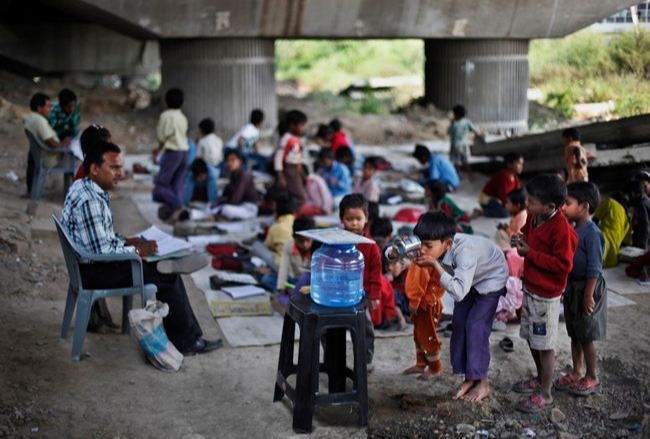 Where Is The School Located?

Rajesh found a different place to locate his "Free School: Under the Bridge". As he is just a grocery store owner with no means to establish, run and maintain a school building and as he also couldn't get the support from external sources, he decided to locate his school for the impoverished children under a Delhi Metro bridge near the Yamuna Bank Metro depot in the year 2006. It is an open-air free school that started with two children and now teaches hundreds of underprivileged children who live in shacks and hutments around the banks of the Yamuna. The students who attend the school are the children of migrant workers, labourers, rickshaw-pullers and farmers. Most of the students here have registered themselves in the nearby government schools but still come here as the school's teaching methodology helps them understand the formal syllabus.

The classes in free school start at 9 am every day for the boys. Physical training constitutes the first hour followed by lessons in prescribed subjects. The boys leave for their afternoon shift in the government schools by 12 noon. As the girls' shift in government schools is in the morning, they weren't able to attend the Free School classes other than holidays until plans were made to start a girls’ batch at 2 pm. Today, he runs two shifts -- the 9-11 AM shift for 120 boys and the 2:00 - 4.30 PM shift for 180 girls with seven teacher volunteers from the nearby areas. The pillars of the metro bridge form the boundaries of the school and over a period of time, the basic skeletal look of it was changed when the students painted its walls with colours. Blackboard was painted on the walls and with financial aid from well-wishers and NGOs, after a few years, a ready-made toilet was built for the girl students. 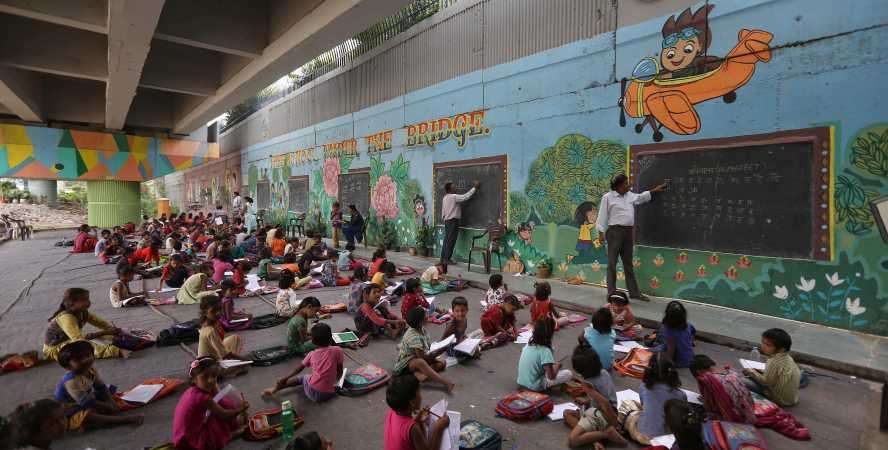 The Pillars of Free School:

In the year 2011, Laxmi Chandra from Bihar's Nalanda district who is the son of a daily labourer and a science graduate from Bihar's Magadh University joined Sharma. He teaches mathematics for high school students at Chandra's free school.

"In Bihar, I have seen many young boys and girls get pulled into Naxalism because they knew no other way to think about a better system. There was perhaps a lack in their education. Today, when I see Delhi’s poor children, I feel they must be guided and educated. The children at this school are hardworking and intelligent. All they need is guidance and that we aim to provide.”, says Chandra. Another part-time tuition teacher from Bihar, Shyam Mehto teaches elementary mathematics at the free school. Rekha, Sunita, Manisha, Chetan Sharma and Sarvesh are the others who take classes of their free will without expecting any pay.

Challenges That Greet Quite Often:

Rajesh says that quite often people contact him in the name of taking this initiative to a next level just to gain publicity and fame. But Rajesh was vigilant enough to detect the selfish motives of people and have never let this social impact project fall into the hands of self-centred people and organizations.

"I am driven by my selfless goal of educating these poor and underprivileged children whose smile is more than enough for me. Initially, some NGOs contacted me and tried to be associated with the makeshift school but I never allowed them as they all looked suspicious. None of them were serious about the children's education and their future. All they were interested in was making money by showing something and claiming something else. I did not approve of their way of functioning which had many loopholes and room for discrepancies," he said.

When shouldering a social cause, it is also important to be watchful of jackal eyes. Rajesh is doing the same. He doesn't want children and their future to succumb to the selfish motives of a few. May children from the slums become millionaires in wisdom under the able mentorship of Rajesh and his team of selfless volunteers. 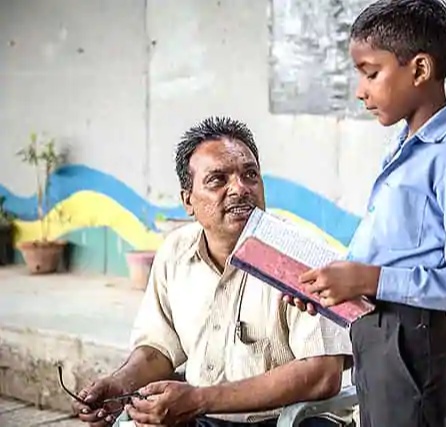