Solar power is the way to go forward to save the earth says, Solar Suresh.

Do we all know that one day or the other the Petrol, Diesel, Electricity which is being used so carelessly is going to reach its end? Once we are exhausted of all these Fossil Fuels what are we going to do? Our needs as greedy humans who are not trying to save the fossil fuels for future generations and planning to exhaust in the current time span itself shows how much we've taken all our resources for granted.

It's not like we don't have alternatives and we only depend on Resources which are made of fossil fuels. We have efficient alternatives which scientists and regular people have invented for the general public. We have Solar Power Which is an alternative to the Hydropower infused Electricity, Biogas instead of LPG, Kerosene, woods. All these have been invented and is been served in front of us, but we the lazy people never bothered to try out our alternatives and save the fuels which cannot be replenished for the future. But there is one man, who didn't just leap like others but took more than an initiative and used all the alternatives he was provided with as the same as others. That's none other than "Dwarkadas Suresh" who is famously known as "Solar Suresh". Let me walk you all through what this 73-year-old man did and why he became a Social Media Sensation.

Who is Dwarkadas Suresh?

He is a SuperHero! Eco Warriors are the New Superheroes... Dwarkadas is a 73-year-old Superhero who resides in Chennai’s Kilpauk, lives in a "Self Sustained Home" which he built. He is an IIT-Madras and IIM-Ahmedabad graduate, In a career spanning 45 years, which he retired from it in 2015, has worked in textile marketing in various capacities including MD and CEO, taken his entrepreneurial plunge to found SAKS Ancillaries Ltd., and even spearheaded another entrepreneurial venture in the Last-Mile Connectivity Space.

He thought about building a self-sustained home not just few years ago, but 2 full decades ago. He was proactive and he had a vision for self-sustainment. Now his house is power packed with Solar panels, Rain Water Harvesting, Biogas, Terrace Gardens and an Air-o-Water machine, which makes drinking water out of air.

First Part of his Self Sustaining Home - The Solar Power Plant

He is called as Solar Suresh... then imagine the Revolution he is taken on his shoulders. The seed was planted during his travels to Germany back in his manufacturing days about 20 years ago. He witnessed many rooftop solar plants in Germany during his visits. If a country with a lot less sunshine can install them, why not in India, which has solar energy in abundance, this popped up in his mind. That catapulted him into prodding further and finding a vendor to install a rooftop solar plant for generating electricity. One of the major hitches he faced was in finding a suitable rooftop solar plant vendor, and in getting a proper solar inverter.

“The bigger names like Tata BP Solar, Su Kam and others did not show any interest or encouragement. But I managed to locate a local vendor with a wealth of knowledge and sharing my enthusiasm. I toiled hard for over a year to manufacture and design the solar power plant for my home,” said the New Era Superhero. By January 2012, Suresh had installed his 1 kw plant and officially started generating rooftop solar electricity. The installation simply requires a shadow-free area, about 80sqft per kw, and preferably on a rooftop. No separate wiring is required within the home. Specialists and senior government officials like the chairman of Tamil Nadu Energy Development Authority came down for a visit to see his installation in action. 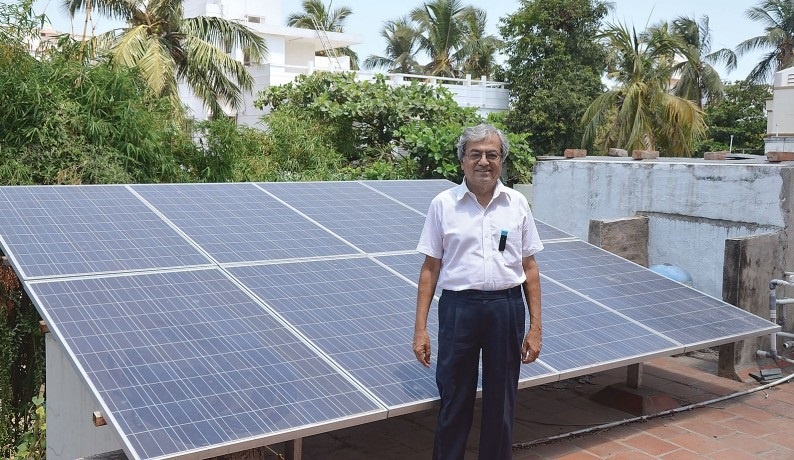 By April 2015, he had scaled it up to 3kw - and it now powers 11 fans, 25 lights, a refrigerator, two computers, a water pump, two televisions, a mixer-grinder, a washing machine and an inverter AC.  Maintenance entails quarterly cleaning of the panels. His plant generates electricity even during mild rainy days - since it depends on the UV rays falling on the panel and not the intensity of heat or light. On extremely heavy rainy days - though rare in Chennai - the load is supplied by batteries, which are charged by solar and not by grid. Suresh says he hasn’t experienced a power-cut even for a minute in the last four years despite living in the city notorious for its power problems. He also saves electricity charges by producing around 12-16 units a day. “It is a sustainable, affordable, viable project, presently giving over six percent tax-free return including battery replacement,” says the New Era Superhero.

How much he has saved since he planted the Solar Panels...

Before the Solar Plants, Suresh's annual electric consumption was 8,100 units, but, upon installing a 1 kw plant, his consumption went down to 5,550 units, and by 2016, after installing his 3kw plant, it has condensed to 3,450 units. He is also protected from fluctuations in tariffs.

Next to the Biogas...

His Domestic Biogas Plant rode on the success of his solar plant! Suresh decided to address his external gas needs next, by installing a Domestic biogas plant of 1-cubic meter capacity to process around 10kg organic waste per day and produce about 20kg of gas per month. He also busted the myth by proving that no odour is generated.

The plant eats organic waste such as cooked and uncooked food, spoilt food, vegetable and fruit peels etc. The only thing to be mindful of was not feeding citric items such as lime, orange, and onion, egg shells, bones or ordinary leaves into it.

Two useful resources are generated - cooking gas and organic manure. In fact, he has even identified some vegetable vendors in his locality who otherwise have to spend money to dispose of their waste, but now happily drop it off daily at his biogas plant.

Here is the best part - biogas is a Non-Compressed Gas, and therefore carries no risk of explosion or gas leaks, even if the gas knob is left open.  It is also non-polluting and saves foreign exchange for the country by reducing dependency on fossil fuels. 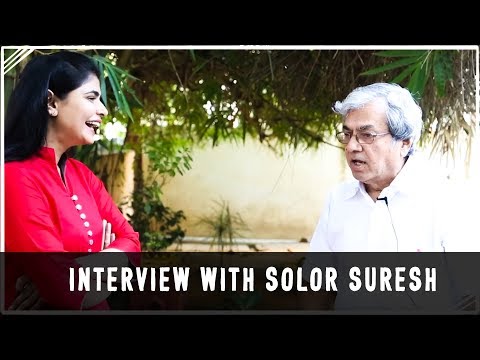 Last but not the least, Rain Water Harvesting and Kitchen Garden...

Suresh installed his rainwater harvesting apparatus over 20 years ago. There is no requirement of daily maintenance and only the terrace space and the apparatus needs to be cleaned before the monsoon season commences.

He has also created a forest-like vibe around his house with a thick bamboo plant-fence and creepers that entwine around over them creating a barrier. “When on the terrace, one gets a feeling of being in a forest and not part of the hustle and bustle of a city. One can’t see any neighbouring buildings and the chaotic traffic – only greenery,” said Suresh.

Suresh's home forest is a topic of great admiration. As a novice with limited knowledge, he started this kitchen garden with okra and tomato. Today, he organically grows about 15-20 types of vegetables. Most of the household cooking needs are now taken care of by their kitchen garden. 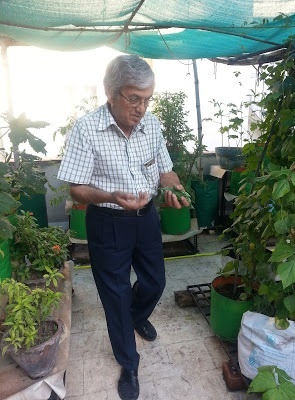 He is a Self-Sustained Man but not a Selfish Man...

A one-man army Solar Suresh has pledged to take this revolution to as many households, organisations, and institutions as possible through education and persuasion, on a pro-bono basis. So far, he has helped install solar power plants in three offices, four schools and seven households across Bengaluru, Hyderabad, and Chennai, and biogas plants in six institutions in Chennai and Hyderabad, and kitchen gardens in six places in Chennai.

He has also been invited by institutions in Chennai to throw light on the benefits of his initiatives. New 17 Vasu Street in Kilpauk Chennai has become a popular destination for study tours for school students from and over 500 people have visited his house to see installations in action. Next up, Suresh will be associated with two projects – producing drinking water from atmospheric air using solar power, and developing a digital key for two-wheelers, where the vehicle can be started only on keying in a unique four-digit password. 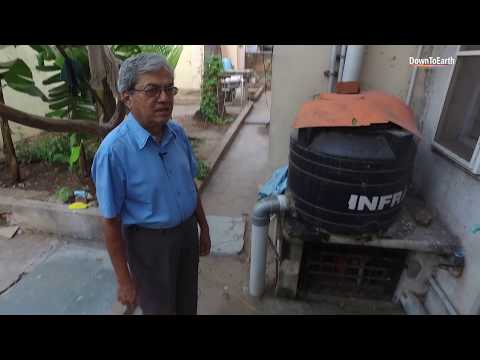