Thimmakka’s Resources for Environmental Education in the U.S is named after her.

Born in Gubbi taluk, Tumkur district, Karnataka, Thimmakkais referred as Saalumarada Thimmakka because of her work. At the age of 40, she wanted to end her life as she could not conceive. She started planting banyan trees along with her husband and found a purpose in it. Both Thimmakka and her husband started with 10 banyan saplings on either side of the road along a stretch of 4 km in the first year. They took care of the plants just like their children. Every year, the count of these trees kept increasing. Till date, there have been more than 8000 other trees grown by her and her husband. Growing banyan trees was challenging in a place that was relatively dry. 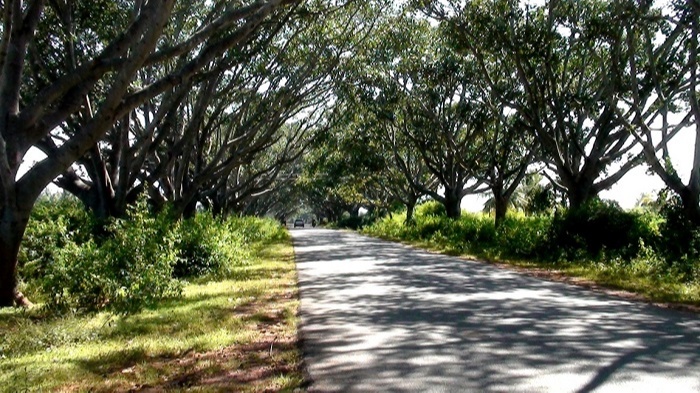 Thimmakka could not go to school due to poverty and lack of facilities. At an early age, she had to take up grazing of sheep and cattle and also work as a coolie. As she grew up, she was married to Sri Bikkala Chikkayya of Hulikal village with whom she found a purpose to plant trees. She not only planted those trees but also fenced, watered and guarded them. Though the trees grown by her are worth several crores of rupees today, her life has no respite from poverty. Unfortunately, she is dependent on a pension of Rs. 500/- given by the government, which is the sole source of her income.

There is no end to hopes.

One might think that growing trees is not a big deal but one would know the reality of it only when they do it on their own. Thimmakka and her husband used to carry four pails of water for a distance of 4 km to water the saplings. They used whatever little resources they had to plant trees. In order to get sufficient water for the trees, they started to plant the trees during monsoon. In this way, they could get sufficient rainwater for the saplings and the trees would have invariably taken root by the onset of the next monsoon. This became Thimmakka’s daily routine for many years though it did not help in her financial condition.

Although Thimmakka did not receive a formal education, her work has been honored with the National Citizen’s Award of India. She has been recognized by the Government of India and was recently conferred with the Padma Shri award in 2019, which is the highest civilian award in the Republic of India. There is also an environmental organization named after her in the U.S. called Thimmakka’s Resources for Environmental Education. Saalumarada Thimmakka is an individual who has brought worldwide recognition to the state of Karnataka through her incredible and massive environmental services. 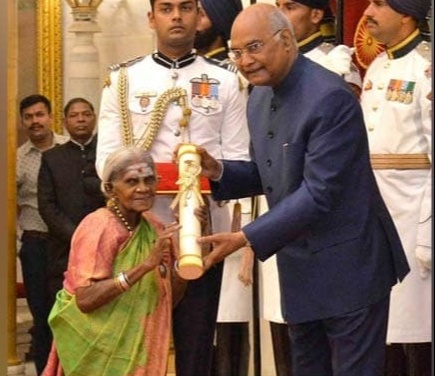 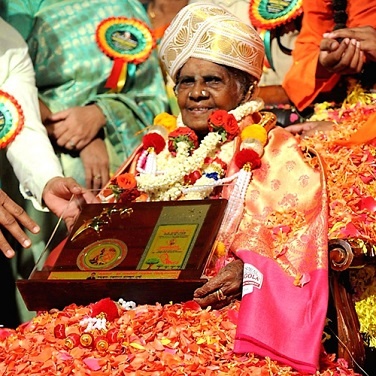 Recognition began to come Thimmakka’s way from the year 1995, a good 5 years after her husband, Chikkanna’s death. Chikkana too had devoted his life towards nature and had quit working to take care of his young trees. He patrolled the stretch of trees and kept the cattle away from them. Thimmakka recalls a facet of Chikkanna’s life where he used to feed the cattle that was captivated by the villagers for straying in other’s agricultural properties–a task that is often forgotten by the villagers.

This mission of preserving the environment is taken forward by Thimmakka’s foster son, Sri Umesh B.N. Umesh has been planting and tending trees along the roads, schools, public places, and on the mountain and hilltops. He is also successfully running the PRITHVI BACHAO Movement. He has his own nursery and distributes plants to the farmers who are interested in growing plants.

Age is not bigger than aspirations!

In spite of receiving hundreds of awards, SaalumaradaThimmakka remains an innocent and a modest person. She is 100 plus and now and still cherishes the dream of planting more trees in future. The lone ranger’s next mission is to bring hospital close to her village, Kadur. She has been seeking the local panchayat’s approval for the construction of a hospital. A trust has been set up to secure a land and construct a hospital in the place where no medical aid is easily available.

Thimmakka continues her fight against afforestation and her contributions are truly remarkable. Her instincts are evidently good as she has planted trees rich in biodiversity. Today, she is invited for every tree planting initiative in the state. With her achievements, Saalumarada Thimmakka has become a role model to the entire world.

Thimmakka concludes:  “Even One sapling each could make a better place for our children.”