Environmental problems and global warming have become a global concern. Scientists around the world are dedicated to the task of reducing the greenhouse effect and combating the emission of pollutants, especially the plastic pollution that now invades the oceans and threatens to wipe out marine life. Concerned about pollution, Professor Saji Varghese has designed a revolutionary straw made from coconut leaves. The inventor of the organic straw is Professor of English of Christ University in Bangalore.

The organic straw is a substitute for the polluting synthetic straw and arises from the research of Dr. Saji Varghese, who found a massive use for the naturally fallen leaves of the coconut trees: "Every year a coconut tree naturally loses an average of six leaves. I conducted a study and found that coconut leaves are burned unused in rural areas. So I decided to get an organic product out of it," he said. The ingenious invention already has orders for ten million straws by the end of January 2020. 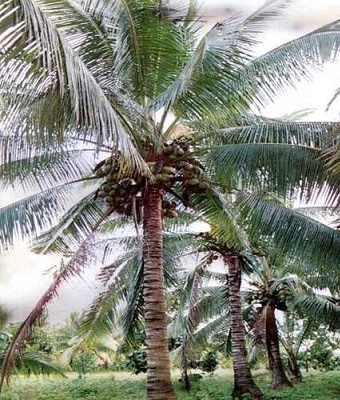 Unique Features of the Biodegradable Straws from Coconut Leaves:

Explaining the unique features of the straws, Dr. Saji Varghese explains that the straws are made in a 100 percent chemical-free process. A simple cleaning and steaming process brings out the natural healthy wax of the leaf itself on to the surface making the leaf anti-fungal and hydrophobic which makes it efficient as a straw. It has a shelf life of nine months and stays steady in beverages for more than six hours. Moreover, over two hundred multi-layered straws can be made out of a single frond of coconut and so there can be no dearth of the raw material as demands rise globally for these first fully customizable straws which are available from 3mm-13mm diameter for the varied user demands. 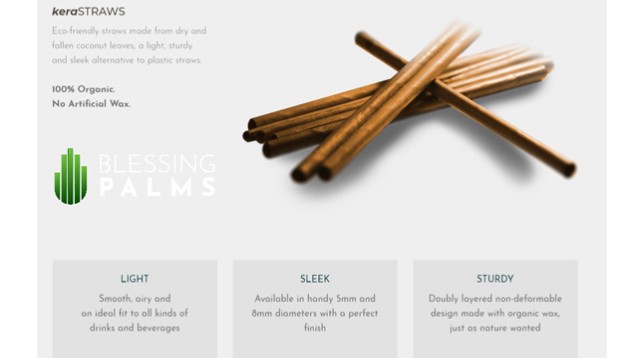 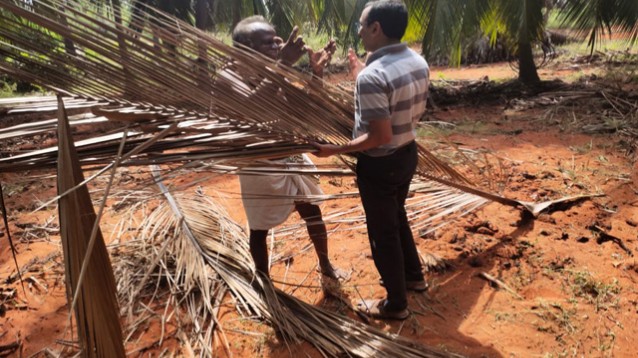 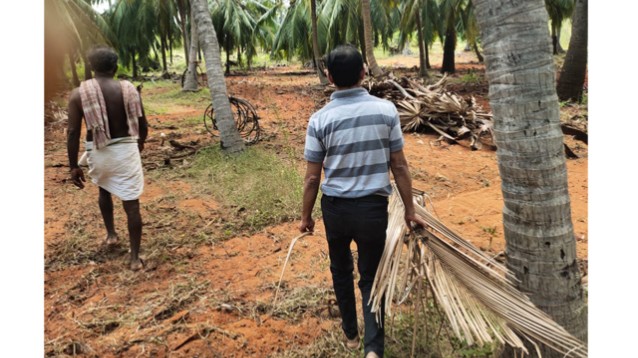 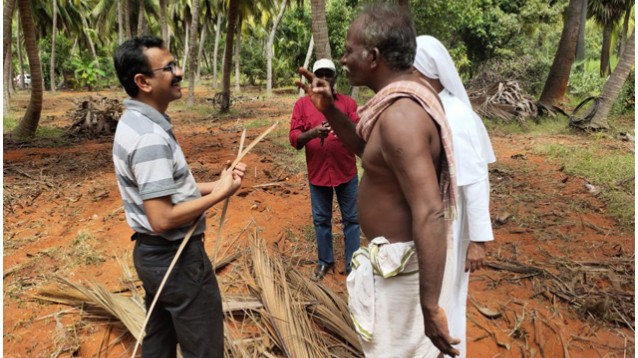 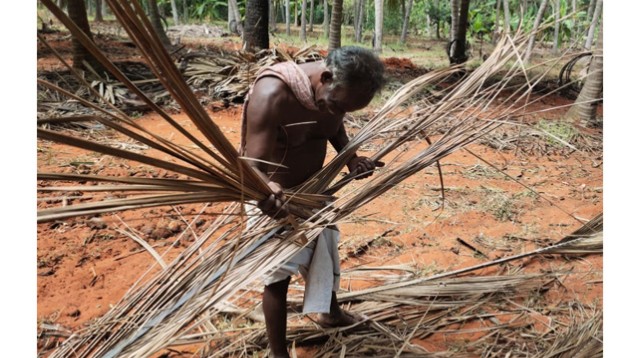 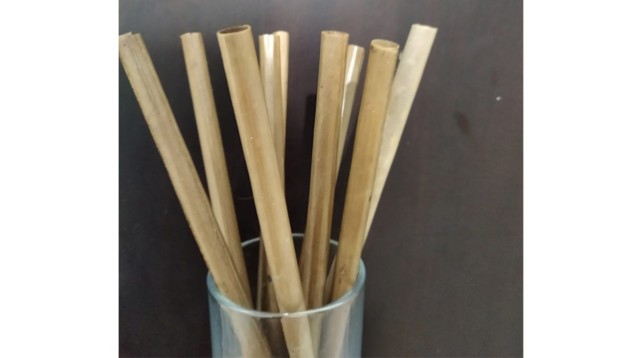 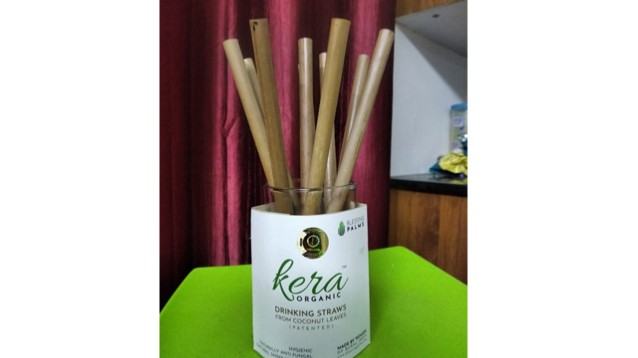 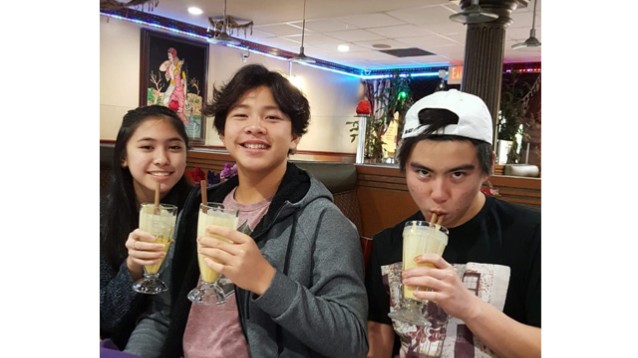 Professor Varghese presented the project to the authorities of the Christ University and received funding support to develop the technology to mass-produce the straws. His company Blessing Palms Pvt Ltd, which is a Start Up incubated at Christ University has developed five machines in house which are patented. The University promoted Dr. Varghese's project, and this ingenious inventor did not stop at creating the revolutionary straws, but is now setting up production centres in the villages of coastal India where he installs the machinery and employs women from the communities to collect the fallen dry fronds from the coconut trees and produce the straws. He has set up the first three centres in Madurai, Tuticorin and Kasargod. His company is now receiving support from Entrepreneurship Development Institute of India (EDII) to set up these production units in the villages. He is also in talks with ICICI and Antrix, the marketing arm of ISRO to receive support to set up production units in more villages and estimates that by 2022, 500 women will be working in the organic straw production plants.

The Kera Organic drinking straws, as he has branded it, has received recognition and awards during the years 2018 and 2019. The patented product won the award at I2S Swadeshi Start Up Award from Unnat Bharat Abhiyan in 2017. It received the prestigious Award of Best Innovation for Social Impact by the Climate Launchpad in Scotland in November 2018. Dr. Saji Varghese was felicitated by EDII for his contribution to Social Entrepreneurship. Blessing Palms has recently won the first position in Kochi in the ASSOCHAM’s Start Up Launchap Series. The finals will be held in February at Ahmadabad. Dr. Saji Varghese’s innovation has featured extensively in the media including The Times of India, The Hindu, The Indian Express, Asianet News, Mathrubhumi, Malayala Manorama and has evinced a lot of interest for the product globally. 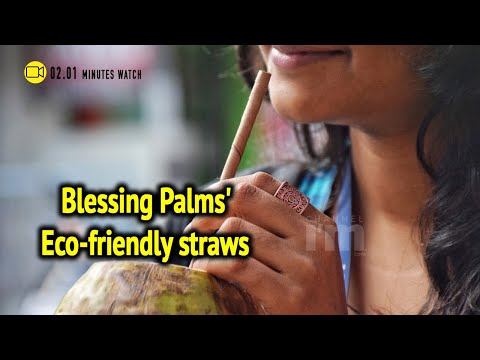 Dr. Saji Varghese's invention opens up huge vistas to clean the environment by preventing the burning of leaves, eliminating the use of single use plastic straws, and to provide huge income and generating opportunities to women in rural areas of India and in other coconut growing countries. His invention gives a fillip to environmental sustainability and contributes substantially to the goals of Swachh Bharat Abhiyaan. Behind the inventor of the ecological straws lies the heart of a man who deeply loves his country and is committed to saving the planet.
To know more visit www.blessingpalms.org