Paralyzed waist-down but can't bear to see patients suffer. Doc gets back to surgeries to bring back happy faces.

Missouri's Surgeon who was paralysed from below his waist performs surgeries and plays golf. A great story to get inspired from.
By: swetha_vangaveti
Published: 1 Years Ago
Last Modified: 1 Years Ago
Read time: 4 min read
Views  178

When you have the strength of will and strong desire to do something, then nothing in this world can stop you. If your body doesn't cooperate, you will curate all possible resources available around you by yourself to stand up tall. When man has strength of mind, everything around him serves as a step to shoot his way up. Dr. Ted Rummel is a living example of all these words. Missouri Surgeon presents before us the reason to stay optimistic during the testing times. He lends us great lessons of inspiration from his wheelchair and let's not delay any further in absorbing them.

An Orthopedic Surgeon based in the city of O'Fallon in the state of Missouri, USA, Dr.Ted Rummel was looked upon as a saviour by the people of St. Charles County. Let them break their shoulders, wrists or ankles, Dr. Ted is right there to fix them. Progress West HealthCare Center where Dr. Ted worked, is a place that flooded with patients who went back with happy faces after being treated by Ted. This busy doctor would operate on over 6-8 complicated cases every week with an impeccable success rate. What happened after September 9th, 2010 when he operated the rotator cuff of his wife, Kathy, is something that leaves anyone with tear-filled eyes. One week after he performed his wife's surgery, he started feeling pain in his back. "Within days, a wave crashed over my lower body and took all feeling and mobility with it.", he describes. This was followed by numbness in his legs. A blood-filled cyst that had been there in the middle of his spinal cord right from birth had burst. Ted knew that there's a cyst but didn't go for the surgery because according to Neurologists, undergoing a surgery would instantly paralyse him. So, he reduced his activity level and hoped that it wouldn't rupture. But when at 51, the blood-filled cyst burnt his hopes and paralysed him from the waist down. 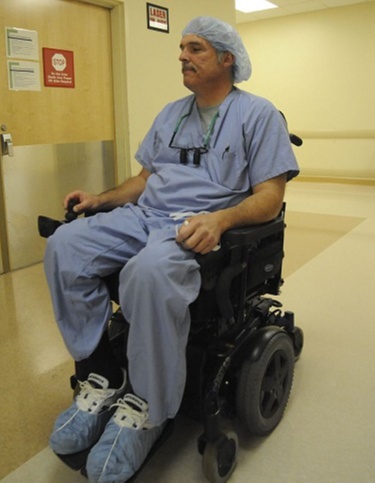 Strong Outside But Depressing Within:

During the rehabilitation, Ted developed a blood clot in his lung along with succumbing to several serious infections. On the outer front, Ted kept an optimistic attitude. He knows what he is going through in medical terms and doesn't want people to remind him. He just need anything positive and not sympathy. But deep inside, missing his job and his life kept killing him. He went into depression attempting to kill himself one bad day. However, the thought of his wife and their four children stopped him from succumbing to the dark phase. The next morning, Ted rose along with the sun and decided to get back into action.

From Playing Golf To Walking Into The Theatre:

Ted, who loves playing golf took to his motorized golf chair that allows him to swing with both arms. He felt relieved to some extent but the fact that he is missing on attending to his patients which he loved the most, kept him low. He desperately wanted to get back to work. His wife Kathy understood what he is longing for. "He has a better understanding of what his patients go through now. He takes more time talking to them before their surgeries. He anticipates his patients’ concerns.", she quoted. Though he was told that he wouldn't be able to perform surgeries again, PWHC supported him by providing him with the necessary resources so that he could return to work and operate like before. He then started to operate on patients' hands, elbows, feet, ankles and knees from his wheelchair. He denied the help offered by another surgeon during his first surgery after a break of two years. Ted was still not happy. His favorites are the shoulder joint surgeries in which patients are made to sit and for this reason, Ted couldn't reach them from his wheelchair. Soon, Ted thought of an alternative - the stand-up wheelchair that helps people with disabilities do everything like a normal person. Ted got his wheelchair customised with a seat belt, chest strap, padded knee supports, control pad etc. There you go! The man with tremendous willpower walked into the operation theatre just like before and from there on, he started to fix the shoulders too! 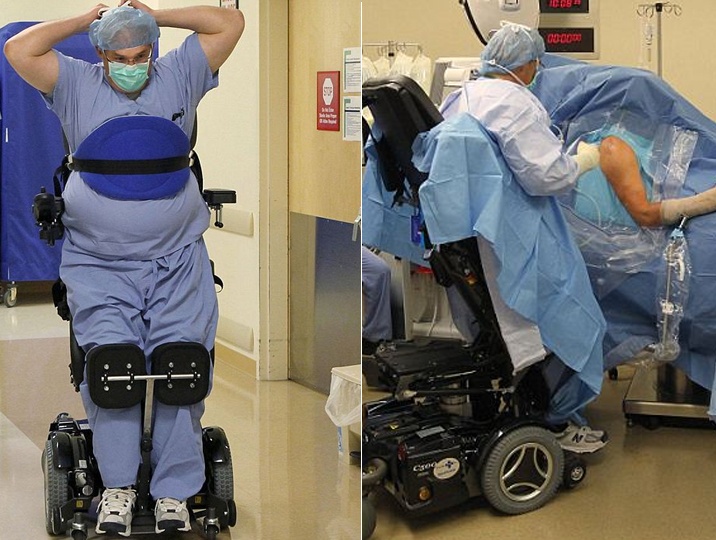 What a great sip of inspiration that his story gives to the generation of today! He feels grateful to his family for having been by his side all through. This man, who underwent a lot in his life comes back and says, "It’s just been a very powerful experience"

Oh god! There's a lot to learn from him especially in these tough times when people are afraid of the virus attack and are even shivering to get the tests done. Be brave and optimistic, things will get better by themselves.