The One Rupee Doc distributes free medicines and treats the poor. It's my duty says Doc.

38-year-old doctor from Odisha who purchased medicines worth one lakh rupees for covid and Black Fungus victims, opens a One Rupee clinic at Burla.
By: swetha_vangaveti
Published: 1 Years Ago
Last Modified: 1 Years Ago
Read time: 3 min read
Views  23

In a country where medical expenses are beyond imagination, if someone comes forward to provide medical services at a low cost affordable even by those below the poverty line, then that's amazing!  A 38-year-old man from Odisha is serving the underprivileged and the poor offering them medical services at just Rs.1. Shankar Ramchandani became a well-known face in 2019 when he was seen carrying a leprosy patient in his arms to drop him in his house. Again, in October 2020, he was appreciated for attending a covid patient beyond his duty hours. He took the patient to VIMSAR in his car and admitted him there. Recently, when he observed that patients are unable to bear the expenses of medicines, he purchased medicines worth Rs.1 lakh and distributed them to the patients suffering from Covid and Black Fungus. This man of selflessness became the hero of our page today for his outstanding service to the poor and the deprived.

From A Humble Background:

Had To Wait For The Right Time:

Dr Shankar Ramchandani, who always thought of starting a clinic to serve the poor, couldn't do so until he gets promoted as senior resident doctors are not allowed to practice by themselves. This made him wait until he got promoted as the Assistant Professor. Once he was promoted, without making any further delay, he started "one rupee clinic" in his rented house. On the very first day of its start, the clinic saw 33 patients coming in for the treatment. "Being an assistant professor, I can pursue private practice after completing my duty time. Thus, I started a 'one rupee' clinic for the poor", he mentioned. Shankar Ramchandani's wife Dr Sikha, a dental surgeon herself, is standing by him in his service. Both are well known for their humanitarian activities in Burla, Sambalpur, and the other neighbouring regions. 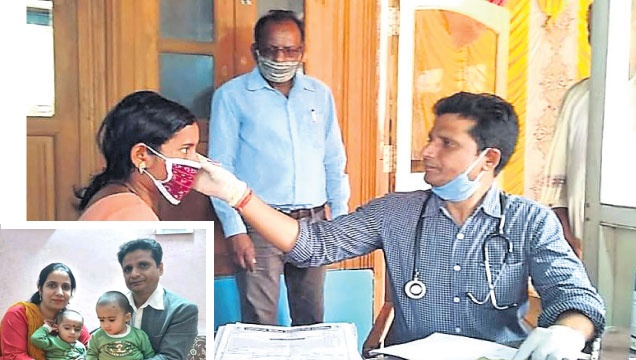 Dedicated To The Masses:

Shankar's father always asked him to start a nursing home. It was his late father Brahmanand Ramchandani's wish that his son grows in life financially and professionally as a doctor. However, Shankar Ramchandani had a different thought altogether. According to him, nursing home calls for huge investment and incurs high maintenance costs. It is not possible to treat the poor at low costs because of the huge maintenance that is involved in running it. So, Shankar decided to open "One Rupee Clinic" in the raw market of Burla. This doctor says that he takes one rupee from the patients as he does not want to let them feel that they are getting treated for free. Shankar extends his services in the clinic in his non-working hours from 7 to 8 in the morning and from 6 to 7 in the evening. Ramchandani's prime motive to start this clinic is to serve the poor, destitute, unprivileged, elderly persons, physically challenged people and the people who do not have access to proper medical care. When he saw people standing for hours in the OPD of the hospital, he resolved to open one that is easily accessible to them. “I am a doctor of the masses and not the classes,” Dr Ramchandani said with joy gleaming on his face.

Humanitarians like Dr Shankar Ramchandani who have been blessing mankind with their philanthropic works must go a long way with abundant happiness and health.