Strays cries were ignored by many during lockdown but one soul heard them.

Dogs that run aimlessly on the streets, the cats and their kittens that roam eagerly around houses in search of food, the monkeys that jump here and there looking for fruits, abandoned cattle that wait for some good Samaritan to feed them - all these visuals are clearly seen on a daily basis but the point is how many of us truly care! When there are philanthropists everywhere who think of people in need and extend their helping hands, hardly any of us look at the plight of these voiceless - the stray animals. Vibha Tomar, a veterinarian student from Delhi could understand the untold agony of stray animals. Especially when the nation went into lockdown in 2020 and when these poor animals on the streets were left alone with no food, Vibha could hear their hunger pangs. She leapt into action and started feeding hundreds of them every day. Even after the lockdown was lifted and when the days came back to sort of normal, she didn't stop caring for them. Her story is one of a kind that shows how deeply she is associated with animals.

Arawali Veterinary College's 4th-year student Vibha Tomar shared a special bond with animals ever since her childhood. When Vibha was in Class 7, a stray dog came running towards her when she was sitting outside her house. Vibha played with the dog and noticed an injury on its body. She wanted to help the dog but couldn't do anything as her parents were not home. Once they were home, she took the dog to the clinic and got him treated. At that moment, she decided to become a veterinarian and pledged to save animals. However, love for pets started when Vibha received a pet dog from her parents when she was in Class 2. She named him Oscar and talking about him, Vibha said that he is her "best friend, my family, my love who was there in every single phase of my life". Oscar's company made Vibha sensitive to the needs of animals. The care, unconditional love and affection, selflessness of her pet buddy everything has got Vibha much empathetic to the animals' needs and pain. She was so lucky enough to have got the immense support of her parents every time she thought of doing something to the animals. Vijay Tomar and Kiran Tomar, her parents, happily said 'yes' when Vibha wanted to become a veterinarian. 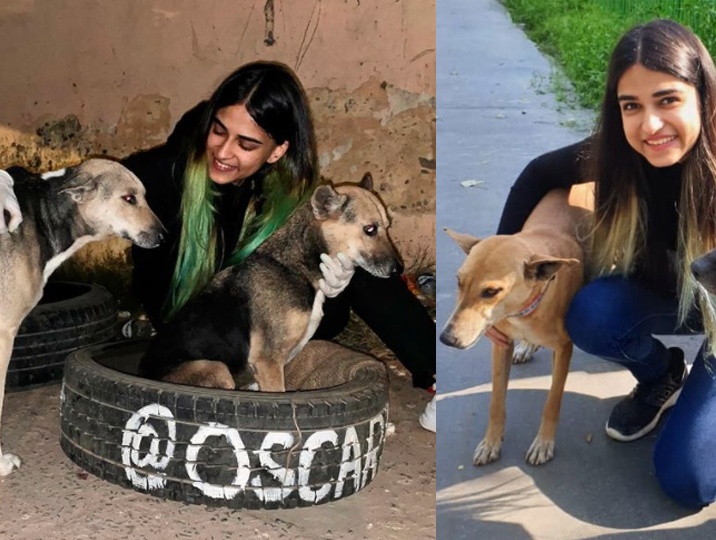 The empathetic side of Vibha towards animals is what dragged her towards addressing the plight of stray animals during the lockdown. Usually, stray animals got their food from the leftovers of bakeries, households, restaurants, etc. and also from people who give them food end of the day. But when the nation went under lockdown in 2020, there's hardly anyone who would come out especially in search of animals on the streets to give them food. Neither there were any food courts nor there were any roadside food stalls for these animals to get some food. Poor animals remained hungry and this is what moved Vibha deeply. "The strays only depend on the leftover food that was given by the people on the side streets. They eat food from the garbage bins outside the houses. If people aren't out of their homes, then no food for these strays", she said. Vibha thus decided to feed the hungry stray creatures on a daily basis. She started with feeding 50 strays and eventually the count increased to 350 strays per day during the entire lockdown period. Several places including South Delhi and Central Delhi were covered by her and in order to get information about strays in more areas and also to urge people to do their bit for the strays, she made posters.

Her posters conveyed a message that strays don't transmit the COVID-19 virus bursting out several fake reports that were circulated over the internet. These posters became viral and Vibha started to receive a good response from people including Bollywood celebrities. Vibha used to prepare food that would take 3-4 hours of time and then she would pack the food in her car. She went out to feed the strays at around 8 pm and came back around 2 a.m. "Sometimes, the time of going back to house extended to 4 or 5 am as I would end up either rescuing animals or treating the injured stray souls", she said. She posted stories on social media platforms urging people to inform about the strays and their locations. Her inbox was flooded with messages from people telling her about where strays can be spotted. "Whenever I went to a particular place, I used to press the car horn multiple times. At first, I used to call them out going to where they were. Then they recognized the honking. So, it was the moment they used to hear the horn and came running to me, as they knew that it was the time to get food. It worked with all the stray dogs, including the cats and the monkeys too" said Vibha. To the places where Vibha couldn't go, she posted on social media asking for help from the local people, where they could feed those dogs. She received support from them too. Thus, Vibha emerged as an angel sent for the cause of voiceless animals during the lockdown.

For The Love Of Oscar:

In the loving memory of Oscar, Vibha has founded "Oscar For Life Charitable Trust" that aims at rescuing, treating, feeding, fostering the strays along with adoption activities. Her project "Winter Homes For Strays" provides homes made of tyres for the strays, also supplying them with rugs to keep them warm. Vibha has also been providing reflective collars to the strays to avoid road accidents for about a year now. During the lockdown period, her Trust received donations from people, including her family and friends. She says that she has spent around 1,00,000/- rupees per month on feeding the strays. Currently, she feeds around 20-25 strays twice daily, costing around 40000/-.

Vibha says that she wants to make Oscar For Life Charitable Trust should become so strong and efficient that when someone calls wanting help for a stray, the team is readily available. "The answer would always be yes at any hour of the day, including midnight", she says. Once Vibha graduates, she has plans to start a shelter home for animals and a pet clinic. "There would be all sorts of facilities for the strays and many modifications in the clinical department for faster recovery of the injured animals", she concludes. Her dream is to make sure that no animal dies waiting for help.

Hats off to the empathetic young woman whose understanding of animals' needs saved hundreds of strays from falling prey to hunger.