Meet the source behind almost every yoga asana we perform today. The Father of Modern Yoga hails from South India.

Meet the Father of Modern Yoga who hails from Karnataka. Almost every yoga asana of today, draws its source from this man of exquisite wisdom.
By: swetha_vangaveti
Published: 1 Months Ago
Last Modified: 1 Months Ago
Read time: 4 min read
Views  3

He believed “Yoga to be India's greatest gift to the world”. Belonging to a South Indian state and having not even travelled beyond the nation, his yoga has got its prominence all across Europe, Asia and the America. Pick up almost any yoga asana and you will be told that it is influenced by him. He is hailed as the Father of Modern Yoga. Be it the White Lotus Yoga or ISHTA Yoga or the Sivananda Yoga or the Bikram Yoga – take anything that spreads its goodness in the air today, they have borrowed their style from his yoga. This article brings before you, the forgotten source of many of the present-day yoga asanas like Sirshasana and Sarvangasana – the legendary Tirumalai Krishnamacharya, the Father of Modern Yoga who believed that unless the body is free of illness, there is no way the mind can transcend and move inward.

Born on 18th November 1888 in Muchukundapura in the Chitradurga district of present-day Karnataka to an orthodox Iyengar family. His parents were Sri Tirumalai Srinivasa Tatacharya, a teacher of the Vedas, and Shrimati Ranganayakiamma. At the age of six, he underwent upanayana and started learning to speak and write Sanskrit, from texts such as the Amarakosha along with learning to chant the Vedas under the tutelage of his father. When he was 10, his father died and the family moved to live with his great grandfather in Mysore. Krishnamacharya spent much of his youth travelling across India studying the six Indian philosophies. At the age of 18, he left Mysore to attend university at Benares or Varanasi. At the university, he studied logic and Sanskrit, working with one of the greatest grammarians of the age, Brahmashri Shivakumar Shastry. He also learned the Mimamsa from Brahmasri Trilinga Rama Shastri. In 1914, he went on to attend classes at Queens College and secured a number of teaching certificates. Krishnamacharya then went on to study the six darshanas in Vedic philosophy at the Patna University in Bihar. He also received a scholarship to study Ayurveda under Vaidya Krishnakumar of Bengal. It was known that Krishnamacharya studied with the yoga master Sri Babu Bhagavan Das and passed the Samkhya Yoga Examination of Patna. It is also known that many of his instructors recognized his exceptional abilities in yoga. Krishnamacharya was well versed in many fields like the ancient scriptures, yoga, Ayurveda, Nadi Pariksha(pulse reading) and others. He went to the Himalayas and learnt yoga under Yogi Ramamohana Brahmachari, a learned yogi. Krishnamacharya’s guru further entrusted him with the duty of spreading the message of yoga to help and heal sick people. 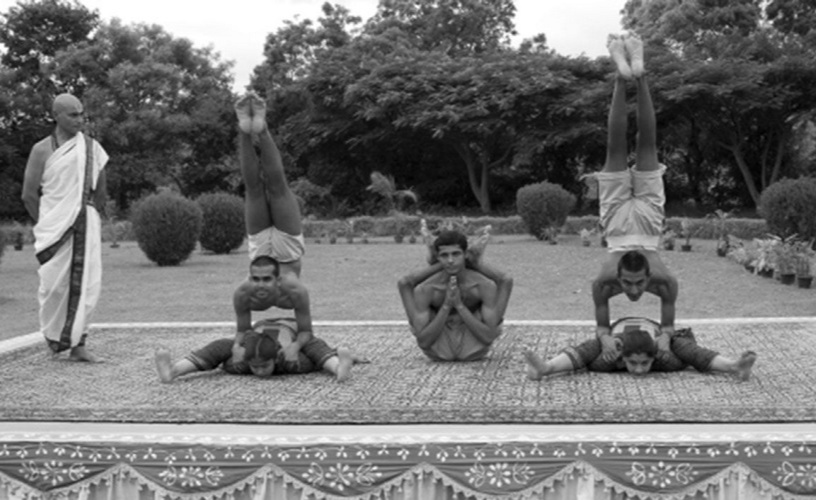 The Asthana Vidwan And The Unique Guru :

In 1926, after knowing about Krishnamacharya’s skill as a yoga therapist, the Maharaja of Mysore, Krishna Raja Wadiyar IV (1884–1940) has engaged Krishnamacharya to teach him and his family.  Initially, Krishnamacharya, who taught yoga at the Mysore Palace, soon became a trusted advisor of the Maharajah, and was given the recognition as the Asthana Vidwan. In the 1920s, Krishnamacharya organized demonstrations on a large scale to introduce yoga and its goodness stimulating people’s interest in yoga. He displayed various demonstrations like suspending his pulse, stopping cars with his bare hands, performing difficult asanas, and lifting heavy objects with his teeth. The Palace also recognised his interest in the promotion of Yoga and sent him around the country to give lectures and demonstrations. The Maharaja, who felt the goodness of yoga himself and recognised the role played by Yoga in curing many ailments asked Krishnamacharya to open a yoga school under his patronage. Thus, on 11th August 1933, Yogashala, an independent yoga institution was born. In 1934, he wrote the book Yoga Makaranda ("Essence of Yoga"), which was published by Mysore University. 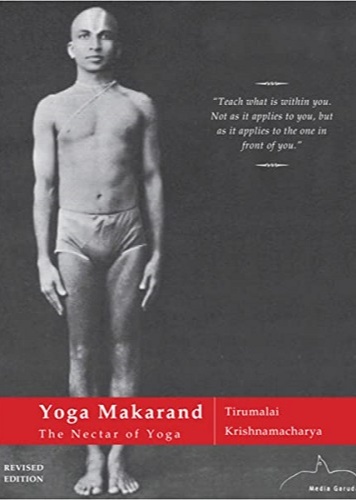 However, owing to the political changes following 1946, the doors of the school were closed in 1950 by the first Chief Minister of Mysore K.C Reddy. Krishnamacharya moved to Madras and began lecturing at Vivekananda College where he acquired students from diverse backgrounds and to cater to each of them, Krishnamacharya adapted his teaching methods to suit the diverse range of students, refining his individualized approach that came to be known as Viniyoga. Though a yoga guru, Krishnamacharya considered himself to be a continuous learner and therefore a student himself. At 96, Krishnamacharya fractured his hip but he refused to undergo surgery, designed a course of practise for himself on bed. He lived and taught in Chennai until the final days of his life. With sharp cognitive skills even at that age, he taught and healed until, at the age of 100, in 1989, he ran into coma and died.

Krishnamacharya has made immense contribution to Yoga and mentioning them would take us to a point infinite.  He developed the concept of vinyasa krama that involves having a sequence of asanas or postures leading to a pre decided goal followed by asanas to consolidate the positive impact of the asana sequence and countering the negative impact, if any. He also contributed a lot for the promotion of yoga for women. The Yoga Rahasya is one of the first books that emphasises on importance of yoga for women. The prominent American yoga teacher Indra Devi was a student of Krishnamacharya herself. Krishnamacharya showed the importance of utilising the power of breath to cure both physical and mental illnesses. My pen keeps going...!

Today, while the world is tasting the benefits of yoga, we should not forget the source from which most of the modern-day asanas have stemmed from. Let’s thank the pioneers of yoga and remember them while we reap the benefits of its goodness. 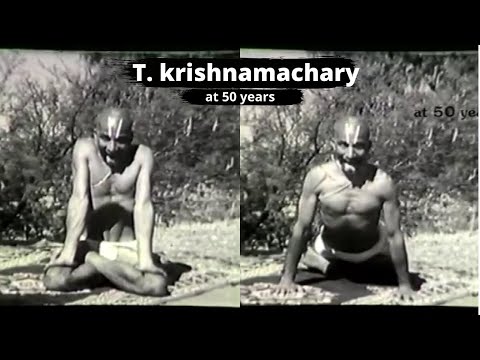