Teenager who has numerous patents on his name asks everyone to follow their niche to contribute to the society.

"Follow your niche and contribute to the society using science and technology" - says an enthusiastic teenager who has numerous patents to his credit.
By: swetha_vangaveti
Published: 1 Months Ago
Last Modified: 1 Months Ago
Read time: 3 min read
Views  185

‘’The most important SDG’s like quality education, zero hunger, and good health are a road to a sustainable future and will help the GenZ in becoming the global citizens’’ says the 16-year-old Joy Agrawal. This teenager has a lot to say and we brought all that to you today.

Sunshine in the Lives of the Underprivileged:

Joy Agrawal, a student of Centre Point School, Amaravati Bypass, is also the founder of ‘Project Gyan’, an initiative which mainly focuses on the aspect of education. Joy was 13 years old when he understood the fact that a lot of underprivileged children didn’t have access to quality education and a lot of them dropped out from high schools due to various reasons. In the process of finding a solution to this pressing problem, Project Gyan was instigated. This initiative mainly focuses on learning science practically through experiments, which in turn, helps a child to think out-of-the-box.

Joy firmly believes that education is instrumental in eradicating the social issues and achieving the Sustainable Development Goals. ‘’Currently, the country has a literacy rate of 80% i.e. a 1/5th of the country is still uneducated and I would like to focus on that issue’’, he says.

He says that his mother, Ms. Manisha Agrawal along with the rotary club have been very influential in creating an atmosphere of giving back to the society. 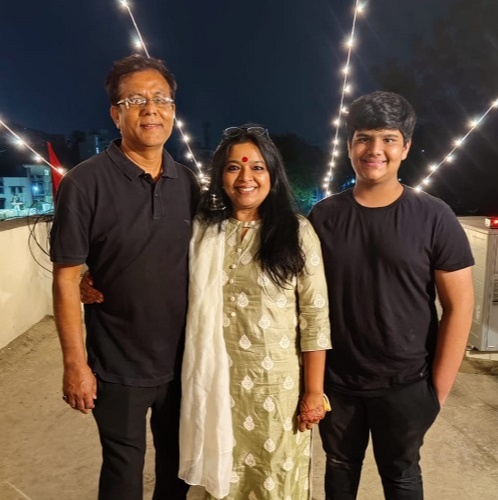 This TEDx speaker is also a founder of an organization called Community Space One, which focuses on sustainable development using the space technology. He is also the CEO of CERES, a research project focusing on the relation between cosmic radiation and the growth of saplings.

Joy is also a space buff and he is currently writing a book called ‘’Space for Sustainability’’. The book is all about how space technology can help in sustainable development. At the age of 14, Joy discovered 2 asteroids while working with the Spaceport India Asteroid Search Campaign organized by Spaceport India Foundation, STEAM Education and Research in association with Hardin-Simmons University, Texas. The asteroids were designated as 2020 RD95 AND 2020 RJ83 which were made a part of wzziorld’s minor body catalogue, later. 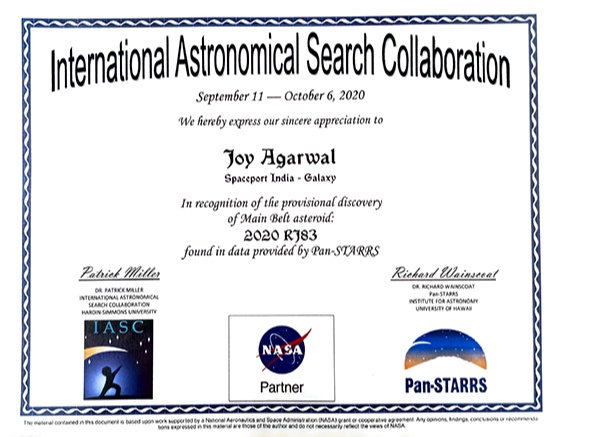 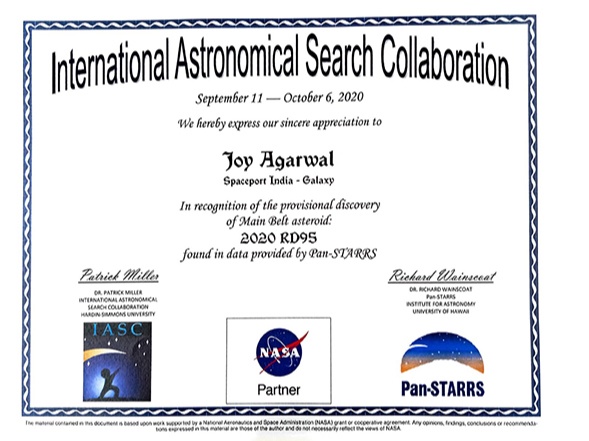 Since a very young age, Joy had received several accolades for his excellences. He bagged a silver in ‘The International Youth Math Challenge’; won the space innovation challenge organized by Visvesvaraya National Institute of Technology AXIS’20; stood second in Science Exhibit organized by BVM; received first prize model, Technex organized by IIT Varanasi and many more. He has certificates in introduction to Matlab, Aerospace Engineering, Python and Practical Physics.

Joy was in Class VII when he achieved something phenomenal. TATA POWER floated a competition "Future of Power 10 years Down the Line" for Engineers where Joy delivered his presentation in the presence of the officials of the Tata Power and the professors of IIT POWAI. Amidst the engineers who participated in the competition, Joy won the consolation prize too. The competition also offered internship to all the winners but as Joy was under 18, he was given the certificate of appreciation. This young genius was also accepted into Yale Young Global Scholars Innovations in Science & Technology on scholarship. He was also selected to the Junior Academy of New York Academy of Sciences, a prestigious program into which only 1000 students all over the globe are chosen each year. 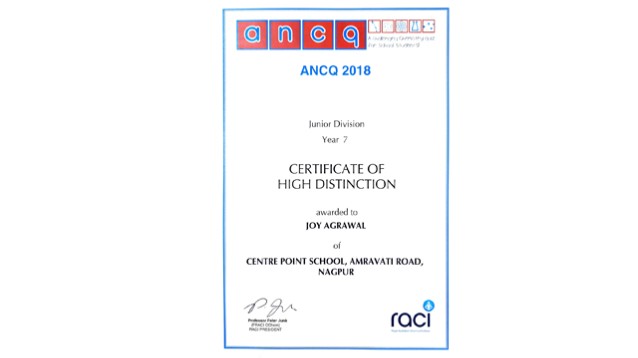 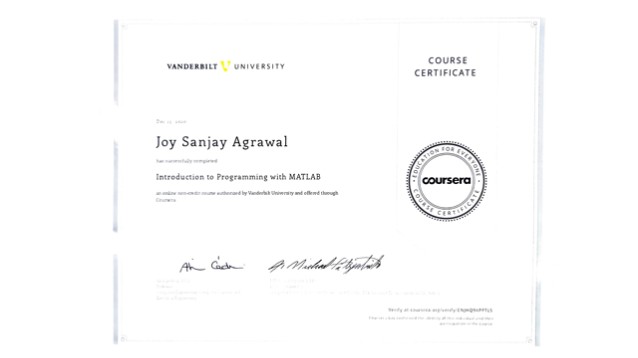 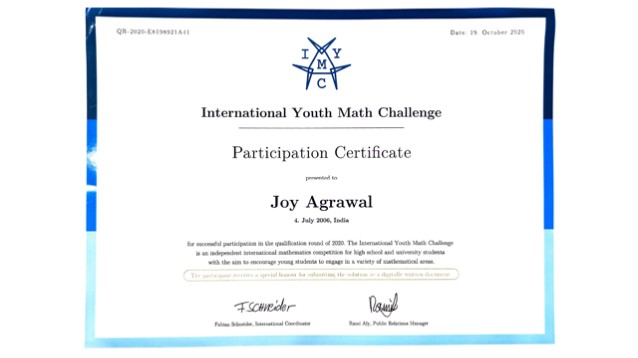 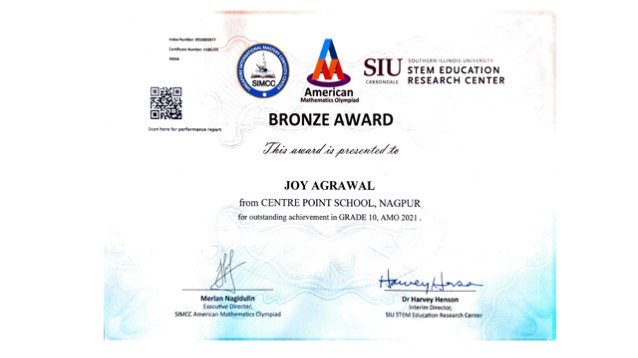 The Road to Future:

Joy does not wish to be a random engineer working all day, instead he wishes to be change-maker and be recognized globally. He wishes to pursue Bachelor’s Degree in Space Engineering and work with the United Nations one day. He also plans to launch his own start-up in Space-tech.

"Stand Out to be Unique":

He shares a message to the GenZ to not to follow others as everybody has their own set of skills and following a herd may not help in impacting a large group of population. ‘’In order to contribute to a society, follow your niche, through which, one can work towards the social aspects of resolving societal issues. My niche is education and science and I am working on them via various projects and organizations’’ says Joy Agrawal.

This young enthusiast has a long way to go and never shows his back for anything that tries to cripple him. We, at BOA, wish Joy great success in all his future endeavours. May he continue to learn and inspire.