The Guinness World Record holder carves just anything out of anything says. That art knows no bounds.

A Guinness Record holder, a nominee of Padma Shri. He has crafted more than 500 plus pieces. teaches students to create best out of waste.
By: swetha_vangaveti
Published: 2 Years Ago
Last Modified: 1 Years Ago
Read time: 5 min read
Views  338

"An artistic mind speaks, warns, enlightens, spreads joy and peace, clears the way and guides". An art lover is sure to touch lives in some or the other way. We learn and grow, making the artistic works, our ladders to reach eternity. Art is that powerful. One such admirer of art who never left its roots how hard the wind blew is Venkatesh Gattem, the winner of Guinness World Record for carving the Empire State Building on a toothpick. Let's dive deep into his story and know more about this man of art.

A Farmer's Son Who Is Diving Beyond Shores:

Born in Chinadoddigallu village in Vishakapatnam on 28th May, 1996, Venkatesh Gattem completed his schooling in Gowtham Model School. This farmer's son graduated from the GITAM School of Architecture in 2019. His father is Suribabu and mother is Satyavati.

Muse Grabbed From The Most Unanticipated Place:

One day, this art-loving little boy had gone for a casual visit to Etikoppaka artists very close to his house. Etikoppaka craft that blends a variety of colors on wood gave his art-loving heart, the wings of excitement. His curious eyes pondered over every piece and this enthusiastic painter was jaw-dropped at the sight of the unique craft. He showered questions and the answers from the artists taught him a valuable lesson - "With art, there are no rules, no combinations and one is free to do what one likes to." After this, Venkatesh has never looked back and there was no second thought in pursuing art. He decided to create his world out of what he loved. The boy who created a miniature of Lord Ganesha out of glass bangles when he was just 14 years old awed his parents who caught his hands-on at art and started encouraging him.
"My parents offered their complete support and pushed me to take this hobby seriously. Even after eight years now, I continue to get support from my parents.", says Venkatesh.

Bone-breaking Comments Only Made Him Stronger:

Though his parents rendered their complete support, Venkatesh had to suffer critical comments from his other family members. In a country where Doctors and Engineers,C.As and Lawyers are the most honored professionals, the idea of becoming an artist didn't taste good to his relatives and they opined that his dedication towards art is purely a waste of time and effort. With an argument showcasing how pointless taking up art as a career choice can be, they have questioned the choice of Venkatesh and his parents. But, none of this stopped Venkatesh from doing what he loved. He sharpened his skills and got better each day. His parents also continued extending their support and the result - this micro-artist turned into a mountain of triumph. Flowing with the waters of art, he did not put his academics aside. He has pursued graduation in B.Arch from Gitam School Of Architecture and went on to secure a doctorate in Arts and Crafts from Peace University, Germany. During this period, he still crafted 400 masterpieces. 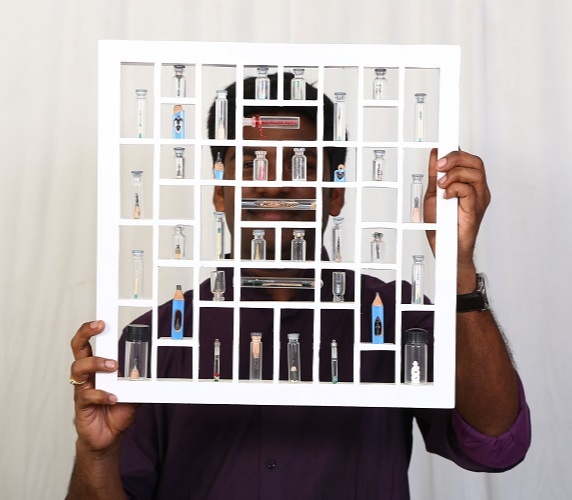 A Peep into His Arts:

One that started as a hobby became his life. He carves enchanting designs on pencil lead, chalk pieces, matchsticks and also toothpicks using just a surgical blade and a needle. The mighty Eiffel Tower, the proud National Emblem, the World Cup Trophy, chess board, buildings, ships are just a few to name.

Guinness World Record - The Outcome of His Perseverance:

Dr. Venkatesh Gattem applied for the Guinness record for two consecutive years but his trials remained futile. His applications were rejected but he was never dejected. With all the rejection letters that hit him as stones, he built a strong staircase to reach the apex book of records. Without giving up, he started studying the world records, looked for an opportunity and he found that very few have tried creating the miniature of the Empire State Building. Boom!! He set his tools to work and within 23 minutes he finished carving the replica of the building on an 18mm toothpick. Finally, to put an end to all his waiting, in 2017, his name entered the Guinness Book of World Records. 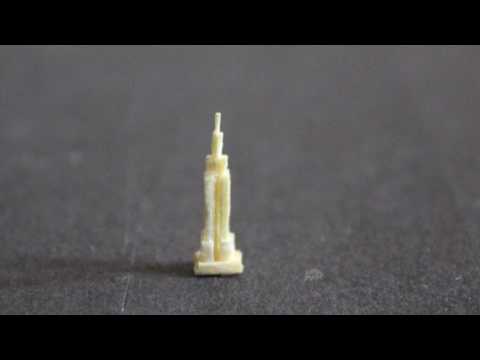 For crafting a 90cm tall Eiffel Tower with empty thread reel in 48 hours, his name found place in the Limca Book of Records in 2016. He was summoned with Rashtriya Gaurav Samman in 2018. The Government of Andhra Pradesh recognised him with Ugadi Puraskar in 2018. The Ministry of Youth Affairs and Sports, Government of India, presented him the National Youth Award in 2019. The list goes to a 100 now!! Of all these, the most significant one and the one that Dr.Venkatesh can never fail to remember even in his dream was his meeting with the then President of India, Pranab Mukherjee. When he was nominated for the Padma Shri, he got a chance to meet and display his art in front of the President. Mr.Mukherjee was impressed with the young talent and encouraged him to follow his dreams and advised not to leave his art, come rain or sunshine. 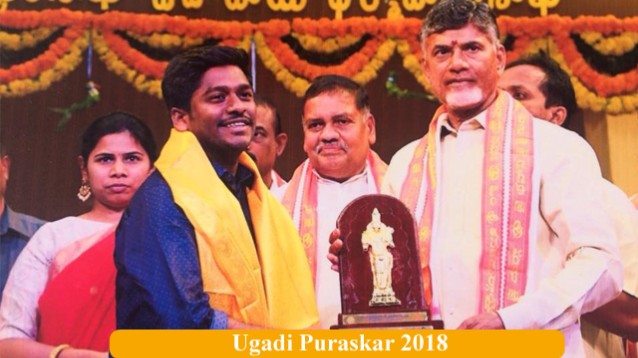 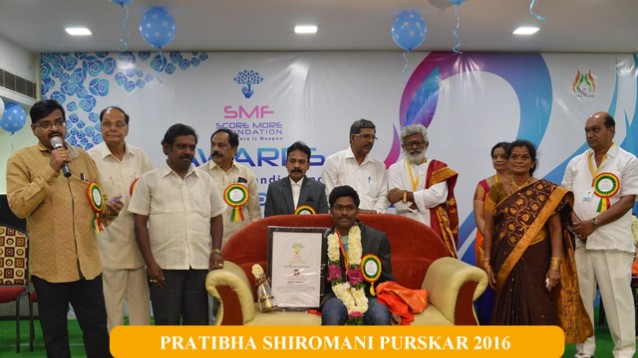 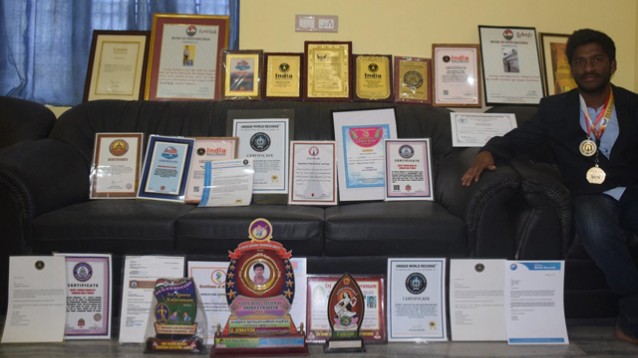 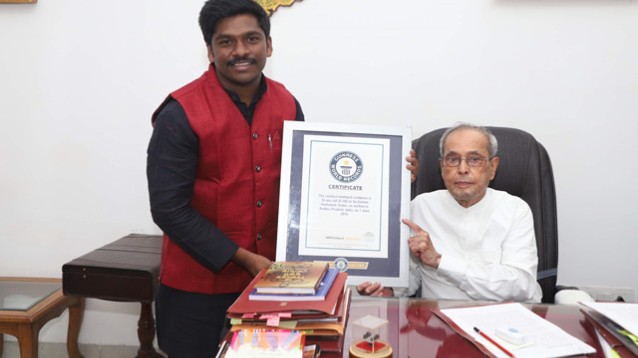 The Self-taught Artist's Strive to Take Art to Every Corner:

Even after bagging too much of fame and fortune, Venkatesh hasn't stopped or slowed down in his journey. He makes frequent visits to the art galleries, looks at the various styles of art to assimilate into him. He conducts workshops to teach micro-art to youth and children. His focus mostly centers on the students in rural Government schools. There, he trains students to create the best out of waste. Under Venky Art Organisation, he conducts art awareness camps and encourages children to express themselves through art. He believes that no economic or social barriers should stop anyone from pursuing their love for art. On this very empathetic note, he helped close to 10,000 students so far. 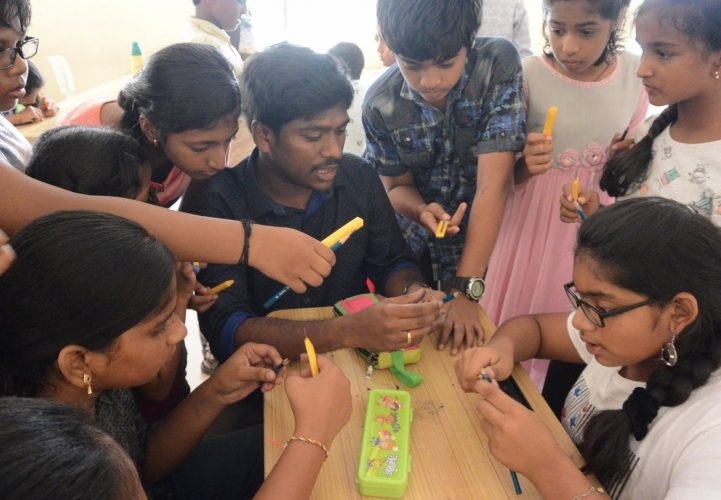 This young man, who has already crowned himself with world class diamonds, is now relentlessly working to gift their glory to those who are thirsty for it. Let his glory continue to be spread in every corner of the globe and may he become an Indian ambassador for Art one day.