In my village, No one should buy drinking water. I found a solution and will provide it. Bold claim!

"Necessity is the mother of all invention", the true meaning of this statement can be understood when you get to read the story of this engineering graduate who solved the problem of his household as well as many households of his village. Let's peep into the life of Madhu Vajrakarur, an electrical engineering student to know what was the problem faced and how he solved it.

Water and electricity are the basics that people need to get dignified access to. It is observed that 88 million people are deprived of access to safe drinking water in India. Reasons can be many - dry climatic conditions, lack of groundwater or contamination of groundwater. Madhu, who hails from the Anantapur district in Andhra Pradesh, also is one among those 88 million people who live in a village with no continuous access to electricity or clean drinking water.

Madhu was born and raised in Vajrakarur village in Anantapur district where the main source of water supply is borewells. As the groundwater is not pure owing to industrial effluents and other harmful contaminants, the water drawn from the borewells is first heated and then consumed. When the groundwater levels drop because of the lack of rains, the villagers purchased drinking water from water tankers. Coming from a lower-middle-class farmer's family, on many occasions, Madhu's family couldn't afford to buy drinking water. At such times, the family used to borrow water from neighbours. But when everyone is struggling the same with chillness, who would donate their blanket? Young Madhu brainstormed to find a solution to this problem. He designed an unconventional solution and placed it behind his house and that solution is a check to all the problems. So, what's that by the way?

The answer to Madhu's questions came in the form of a 15-foot tall wind turbine which he built using plastic pipes, iron rods, and some other elements that he purchased online. This wind turbine provides 80 to 100 litres of water per day, also allowing him to pump water from the borewells by using a motor. He initiated this in the first week of October 2020 and completed it within 15 days. This cost him a total of 1 lakh that he pooled up from his parents as well as his own savings. For designing the fan part, he took the help of welders and for deploying the structure, his friends were always there. 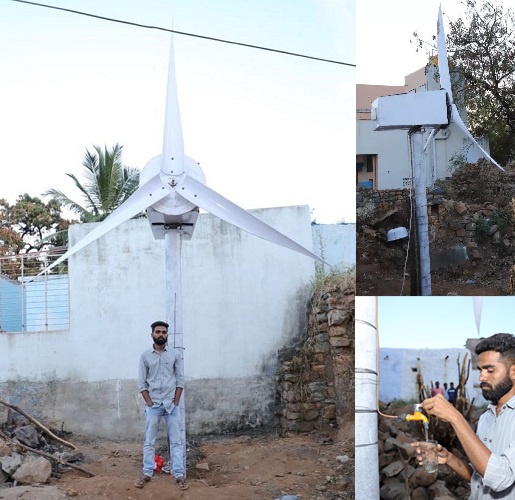 How Does It Work?

Madhu's wind turbine collects moisture from the atmosphere which is further directed through a copper pipe and finally reaches a three-stage filter. The moisture in the wind is directed into the frame of the wind turbines using a blower placed at the back of the fan. Once this cool air goes into the long frame, the moisture is then directed into the cooling compressor which condenses the air into water. The water is further sent through copper pipes into a three-stage filter that has membrane filters, carbon filters, and UV filters to absorb and remove any dust particles present. The resulting clean water is accessed through a tap placed on the frame. This water can also be collected in an external tank that holds up to 40 litres.

The wind turbine is also connected to an inverter with a 30-kilowatt capacity and this is used to power fans, lights, and plug-points in Madhu's home.

The Source Of Inspiration?

Since his second grade, when Madhu studied about a wind turbine, he always wanted to build one but he didn't know how. He used to make model wind turbines using cardboards and other things and presented them in the school-level science exhibitions. When he learnt about the technology behind the making of solar power grids and automatic street lights in the second year of his graduation, he could make out how things work. In October 2020 when Prime Minister, Modi spoke about windmills that generate water and how the wind turbines are deployed in other countries, Madhu was determined to build one in order to solve the problems of clean drinking water and electricity. By watching YouTube videos, he gained more knowledge on the making and functional aspects of wind turbines. He designed a model that suits his requirements, procured the raw material and designed one.

"Experimenting and trying to implement innovative solutions was something Madhu was always fond of since school days. I am very happy that he was successful with the wind turbine and I hope that his efforts get recognised and can solve water problems across the country.”, says Vannur Vali, Madhu’s childhood friend.

To Make It Widely Accessible:

Madhu is now trying to commercialise his design so that it could help others sailing on the same boat. He hopes that setting up this wind turbine in water-scarce areas could solve the biggest of all the problems being faced by people in the country.

Thanks to young people like Madhu who are not confining their education and skills for themselves but are trying to bring about solutions to solve the problems of the masses as a whole. When we read about people like Madhu, hope for a better tomorrow revives. 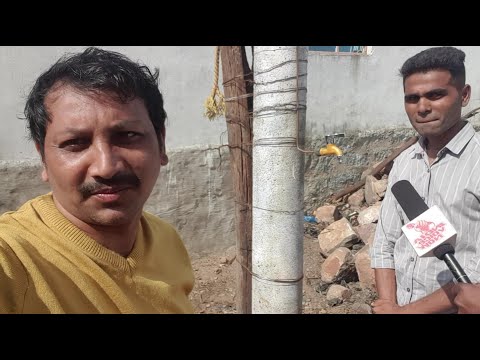