Paytrust payment model has made her farming and milk biz grow many folds.

She wakes up before dawn and travels to Gowripura village in Hassan district of Karnataka, 11km from her place to reach her farm. She then assists her farm labourers a.k.a co-workers in milking about 20 cows. She collects close to around 50 litres of milk, drives back home, and just puts this milk outside her house in Hassan. People come and take the required milk, drop the cash in the money box placed in the stall. Neither there are staff nor CCTV cameras to monitor the transactions and ensure that people paid for the milk and not stole it. It purely runs based on trust. After an hour, the lady goes to the stall to collect the money.

All this is about a 56-year-old lady of Hassan in Karnataka, Hema ananth, an organic farmer. When you listen to her story, you feel as if you are enjoying in the lap of nature feeling the cool breeze of the trees. So why stop? Let's continue!

After her breakfast, Hema heads back to her farm that's spread over 30 acres. She spends her day growing crops of various fruits and vegetables. At the end of the day, she harvests organically grown food that sums up to around 25kg and places it for sale in her stall in the evening where her customers drop by and purchase vegetables following the chart that lists the pricing. Along with various kinds of vegetables and fruits, she also sells value-added products like coconut oil, turmeric powder, lemon pickles, fresh juices, and others. The prices of organic vegetables and fruits including milk are kept on par with those of them in the market as she feels charging extra isn't fair. She earns around Rs. 1000- 1500 every day. 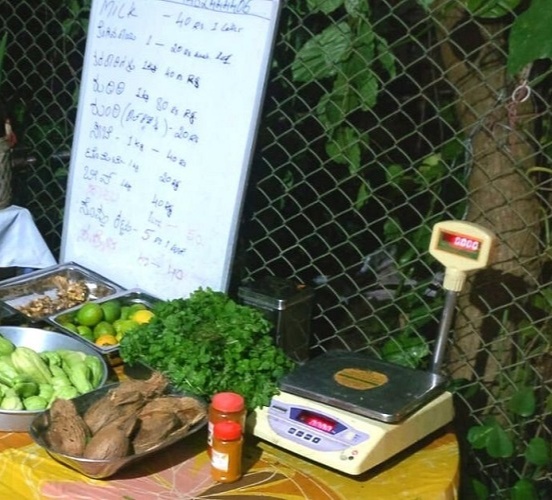 In a world where we think twice to trust even our shadow, how is Hema believing in her customers so much? She goes on to say her version, “My customers are very particular about paying for what they take. Only on 2-3 occasions, people have stolen food and that does not bother me. The fact that someone is taking food without paying money shows he/she is needy. I don’t consider that as an act of stealing."

Hema interacted with her customers and understood that most packaged food items come with preservatives and are loaded with artificial colours that enhance their taste and shelf life. On the other hand, the healthy and organic products available in the market are expensive. Thus Hema resolved to sell her organic farm produce not like a commercial seller. She kept the rates of her organic products parallel to those of conventional products.

"I started making by-products. This way customers get healthy alternatives and the income of my co-workers also increases,” says Hema.

It All Started With Zero Knowledge And Great Motivation:

Hema, who just finished her class 12 and who later became a homemaker and a mother, decided to venture into farming when she inherited farming land from her grandfather, Krishnappa. It was 1994 and along with the land, she received Rs.150. When she disclosed her decision, it was dismissed by the people around her saying that the barren land requires investment in lakhs. Moreover, as Hema has zero knowledge in farming, they said, her investment would go in vain. Thus her husband also refused to invest initially. At that time, she received words of motivation from her grandfather who said, "Mother Earth is the biggest teacher. Just visit the land without any expectations and observe how the soil behaves". Though young Hema could not understand what he meant by that completely, she decided to take a forward step. Clueless about what to do and how to proceed, she was just walking in the barren land when she met a group of cow herders with whose help she got in touch with veteran farm labourers in the area. She met a few women who readily accepted to teach farming to Hema. In return, she gave them bread and fruits. Not only that they shared their expertise with Hema and but also have been with her for the last two decades now. Hema observed the agricultural practices like sowing, watering, and manuring, etc from the women.

"I owe this luscious farm to their ancient but simple practices that are completely organic,” smiles Hema.

And with Rs.150 she received from her grandfather, she bought ragi seeds and has sown them. Three months later, she harvested it and made Rs. 2600. With this, she purchased a second hand TVS scooter. Eventually, she started growing coconut, sandalwood, teakwood, coffee, pepper and banana. Hema now earns up to Rs 4 Lakh every year. 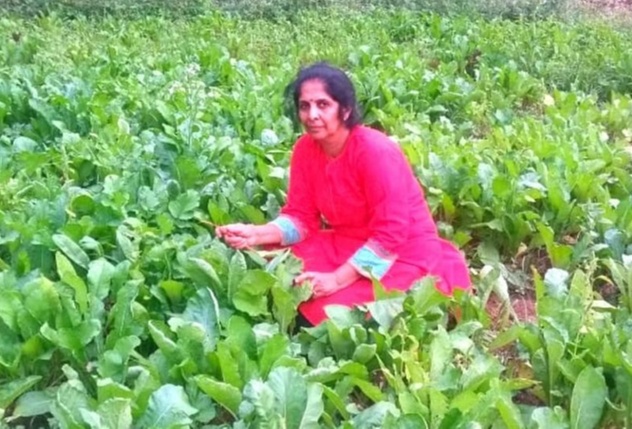 One of her customers for the last three years, Dr Ramakant says he has seen an overall improvement in his family’s health after he started using organic products.

“The milk is very pure and my daughter’s coughing problem has ceased. Even though I have to drive for nearly 45 minutes to take vegetables daily, I do not mind. The stall completely runs on honesty and for her, money is secondary, giving organic food is a priority. It is my honour to buy food from such an honourable lady.”

Hema proved that you don't need to invest lakhs to grow natural products. Mother earth doesn't ask for a degree or diploma to grow crops. She teaches everything herself. Hats off to Hema for proving that healthy living both physically and mentally does good to everybody.