The Fire activist who got the government to change the safety law.

Lost his son to a terrifying Carlton Towers fire. Started Beyond Carlton, got the govt to change the safety law. Now developed an APP for safety measures.
By: manjula_banerjee_canada
Published: 2 Years Ago
Last Modified: 1 Years Ago
Read time: 5 min read
Views  53

Back a decade, when a fire sprang up at Carlton Building near Old Airport Road on February 23, 2010, a nightmare hit the Bengalureans. Nine innocents died out of suffocation and a lot more lives were affected. Horrendous visuals of the episode shared via web-based media showing pictures of representatives working in the building choking to death and some, in any event, leaping out of the windows to spare their lives. However, this tragedy came out with hope, when a responsible citizen of Bangalore, Mr Uday Vijayan, who lost his son,  Akhil, at 23-year in that episode, chose to connect with others influenced and thus Beyond Carlton raised out from the ashes of burned Carlton Tower. The first fire safety movement in India aims to make the general populace more aware of diverse facets of fire safety procedures and the officials' responsibilities.

For Uday Vijayan, a Managing Trustee and  Beyond Carlton President, that was a startling moment when he went to the fire service and noticed that the fire department system itself had huge flaws. He understood, "The officials were not adequately authorized to go into the tower and examine them." Also, that sounded somewhat odd to him. He included, " If they can't come and check, whether or not the structure is fire-safe, who else can, nobody else is qualified."

The realization has transformed a personal loss into a champion ...

Beyond the incident, Uday clarified the reality of how few practical measures could have avoided the spreading of poisonous gases across all floors, aided in the specific fire protection from inside the tower and the resident's safe evacuation. Some straightforward and doable estimates like fire-appraised openings in examination boards of electrical shafts, fire-stop hindrances on floors, a practical smoke caution framework, a fire security framework, and exits could have spared the lives of these nine.

Beyond Carlton has now evolved to be a fire prevention organization involving individuals who want to improve India's approach to fire safety and encourage the population to informed regarding fire safety. 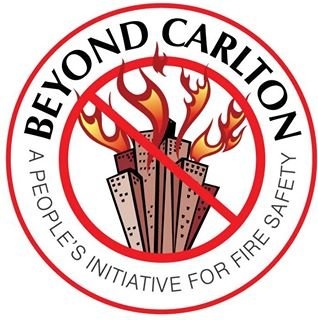 Beyond Carlton is a charitable trust organization comprising five members representing families who lost their family and friends in that incident.

“Sometimes a small step can result in a big change”

Initially, until 60 days, Mr Uday discovered that the vast majority of individuals hardly cared about fire safety issues and there was an immense lack of care. Nobody wants to accept the fact that they might become part of such mishaps.  And nowadays, the PIL application has culminated in the fire and rescue Agency undertaking evaluations every two years. The management councils in high-rise residences are now much more responsible.

The Executive Council comprises resident individuals who contribute a significant part in driving the Beyond Carlton Mission and actualizing its projects.

R.A.VENKITACHALAM (Venki) is a  Vice President at Public Safety Mission at Underwriters Laboratories Inc. (U.L.). Venki is answerable for propelling the reason for Public Safety and U.L.'s U.L. core purpose in the developing nations.

VASANTHI HARI PRAKASH, is a correspondences mentor, media planner, and an anchor. Additionally, she is the originator of Pickle Jar, a network stage that tries to minister projects of social significance.

SUMIT KHANNA works with F.M. Global's India office. He is liable for managing the organization's endeavours to help construction regulation, guidelines composing, and supporting customers in misfortune counteraction at their offices.

Fire safety committee yet to take off….

Cooperation from various agencies has been a critical matter in the fire safety sector, yet a panel guaranteed to investigate it is yet to take off. Individuals from Beyond Carlton have brought up that all partners — BBMP, Bescom, CREDAI, alongside the fire backing gathering, were essential for the fire security panel.

A Government Order proposed in 2018, but unfortunately, it is yet to work out," stated by a Beyond Carlton member.

One of the initial steps taken by Beyond Carlton a couple of months after the mishap was to file an interest litigation (PIL) appeal with the Karnataka High Court concerning fire security standards in the state with explicit reference to infringement by manufacturers, endorsing authorities, and occupants. The PIL even requested the fire dept's jurisdiction to investigate and submit warnings in the event of a violation. Its PIL in Karnataka's High Court constrained the legislature to correct fire security laws to make them more rigid for high towers.

According to Section 13 of the Karnataka fire and safety Act 1964, the immediate effect of this application was that the High Court provided directives to the state authority to inform the fire prevention measures to be followed by contractors and occupants. The warning has released on 7, July 2011, 18 months after the horrific accident at Carlton Building. Such steps centered mostly on the implementation strategy provided by the Fire and Rescue Services and the Bruhat Bangalore Mahanagara Palike (BBMP). The above Provision enables the Government to guide the agencies on precautionary measures.

Today residents in Bangalore may file complaints concerning infringement of fire and safety legislation via the App, and they will be followed immediately.

Until then, a citizens' movement has worked actively to raise consciousness regarding fire safety. Reporting their experience or studies through blogs and social networking platforms and building India's largest fire protection group on their webpage is yet another way of reaching out and distributing knowledge. They are now closely working with colleges, seminars, and resident care groups to undertake fire safety conferences and education. Talking at workshops and conventions, Uday with his group has been trying their best to increase citizens' consciousness.

Know More About Beyond Carlton