Her love and life is the Wild. Her wildlife films received worldwide acclaim.

She is a wildlife photographer, an explorer, a filmmaker, a poet, a writer, a public speaker and wildlife conservationist - received the Diana Award 2019.
By: swetha_vangaveti
Published: 1 Years Ago
Last Modified: 1 Years Ago
Read time: 4 min read
Views  37

Glittering marvels of the earth, the fireflies, are sure to fascinate everyone. With jaw-dropped faces, everyone looks at those little creatures but when Aishwarya Sridhar read about them in a newspaper article, her interest in them has gone to the next level. Being a wildlife photographer, this lens woman wanted to capture these shining little creatures. She researched on their habitats and found that they are abundantly found in the Western Ghats. She journeyed to Bhandardara with her Canon. The locals guided her to the spot and Aishwarya trekked for two-and-a-half-hours in pitch darkness not caring for the nocturnal species in her way. There she was! She spotted a Myrobalan tree that was completely blanketed by the fireflies. Never in her life has she seen fireflies in such huge numbers.

"I felt like I was standing in the magical world of Harry Potter,” she says. Well! She took her weapons out - the Canon EOS-1D X Mark II camera and Canon EF16-35mm f/2.8 L II USM lens. At a focal length of 24mm, with a shutter speed of 24 seconds, f/2.8 and ISO 1000, she snapped 27 consecutive shots, which she later brought together in the post-production. Previously, when she used the 100-400mm lens, she missed out on the natural flashes of the flies and the whole tree didn't fit into the frame. She found it extremely tough to focus on the fireflies. To get the precisive shot of the tree in the dark environment she wanted to use a torch but doing so will disturb the fireflies. Thus she just relied on her eyesight and a lot of patience. The night sky above her was adorned with twinkling stars. What a sight! Stars surrounding the tree in front of her and stars covering the night sky above her. Her creative neurons triggered and she decided to frame the fireflies with the star trail.

In other photographs [of fireflies], I didn’t see the juxtaposition of fireflies with the night sky, so that propelled my creative direction, she says. 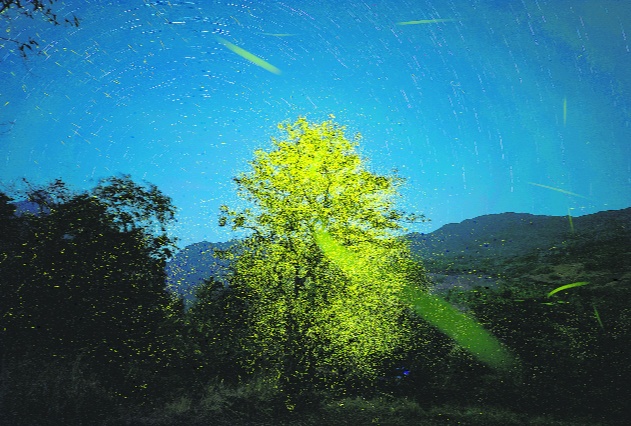 The capture was ready and she named it "Lights of Passion"

So what is all this to do with our page today? Well! This is the story of a 23-year-old wildlife photographer Aishwarya Sridhar whose victory on the international stage has filled the Indian air.

Aishwarya clicked the picture and her "Lights of Passion" was selected from among 50,000 entries sent by the photographers from over 80 countries. Aishwarya bagged the "Highly Commended" award at Wildlife Photographer of the Year Awards under the category of ‘Behaviour-Invertebrates’. Her photograph shall be put on display at the Natural History Museum, London. Though she could not attend in person to visit the museum, she asked a couple of her friends in London to visit the museum.

Aishwarya wears Lens as her jewels. But she is not ok with just one hat on her. The 23-year-old is an intuitive photographer. She became a photographer not because her father gifted her a camera when she was 11 years old. She embraced her camera for the love of nature she has. She loves the air in nature, loves to meow with the wild cats and fly with the forest birds. Wildlife calls her and she runs with her camera. She wants to show the world the beauty of wildlife with her pictures. She wants to present to the world how important it is to conserve wildlife and nature. She wrote more than 200 poems on nature. She also wrote several articles centered on nature. Her images, poetry and articles were published in several magazines in print and online forms. Reputed magazines like the BBC Wildlife, Guardian, Mongabay, Sanctuary Asia, Saevus, Times of India, DNA, Hindustan Times, The Vibe and Pawstrail also featured her works. This explorer, writer, storyteller and a poet is also a wildlife filmmaker. Her first documentary ‘’Panje-The Last Wetland’’ got telecasted on DD National and was screened in numerous film festivals. She also made a feature film on the iconic wild Bengal Tigress Maya, ‘’The Queen of Taru’’ that has won the Best Amateur Film at the 9th WCFF, New York.

Awards in Her Bag:

Aishwarya became the youngest girl for having received the Sanctuary Asia ‘’Young Naturalist Award’’ in 2011. International Camera Fair Award and Rotary Vocational Excellence Award also adorned her award shelf. Hon. Governor of Tamil Nadu, in 2019, for her extensive contributions in preserving the vanishing wetlands of Navi Mumbai graced her with the Woman Icon Award in the media category. She was given an opportunity to be the member of the State Wetland Identification Committee appointed by the Bombay High Court - the youngest member ever. Her award crown was also studded with the prestigious Diana Award in 2019 by the Royal House, London for being a change-maker in the arena of wildlife. 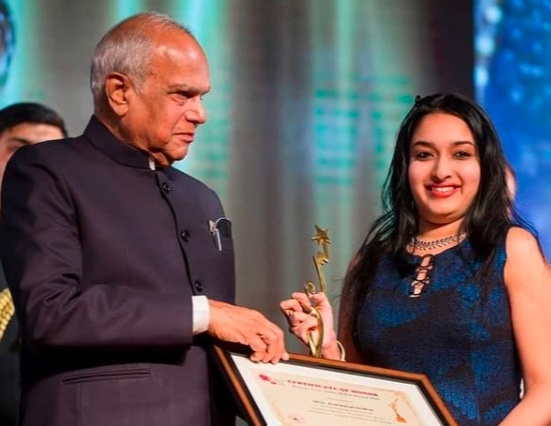 More Power to This Young Girl of Wild:

The child of wildlife, Aishwarya is considered to be among the most influential personalities who embraced the wildlife and its cause. She hopes to make more films in future aimed at bringing policy level changes in the field. She is relentlessly working with NGOs as well to tell stories of people who tirelessly work to protect the endangered. She wishes to expand her existing network and continue to give more seminars in schools and universities, host more workshops and talk sessions on Nature going forward. This TEDx speaker is on a mission to spread awareness on wildlife conservation using audio-visuals, interactive sessions engaging all age groups

May under the magic of her lens, the prosperity of wildlife blossom!