When you grow up watching struggles, you will become sensitive to people who go through them. When you come across a lack of resources and understand how technology can fill the gaps, there you go, you are all set to work towards the advantage of society. Your age or your educational degree don't matter when you have a real-time understanding. A 22-year-old young man's story supports the same. Let's know more about Dipankar Das and all about his innovations that aimed at solving real-world problems.

A Closer Look At The Real-world Troubles:

Dipankar Das is a 22 year old young man from Andaman and Nicobar Islands. He came from a middle-class family and his parents belong to an agricultural background. Dipankar saw his parents struggle hard to keep the family running. Just to give him good food and basic education, his parents toiled day in and out. Dipankar also turned out to be a good son who understood his parent's hard work. Ever since childhood, Dipankar was inclined towards building various things. He used to take anything that came to his hand like mud, dough, cardboard etc. to build various objects. Anything that was considered to be "waste" became an object of utility in Dipankar's hands. He built toys, cars, and other shapes out of mud and other materials. As he grew up, the materials he used varied. By the time he was in class 5, he started using metals to build things. He is currently pursuing Mechanical Engineering at LJ Polytechnic College, Ahmedabad with the support of the Gujarat Grassroots Innovation Augmentation.

Try And Try Until You Win:

Dipankar made a handful of models over a period of time. But, whatever he prepared couldn't satisfy the spectators when they were presented in competitions. To his disappointment, his models didn't receive much acclaim initially. He was often left behind in the competitions. However, Das didn't stop trying. After many attempts, he came up with something that fascinated everyone - the Solar Pulse Thresher. He developed this machine in order to facilitate the threshing process in farms. This machine runs on solar energy, reduces the manual effort of farmers in threshing the grains, saves time and energy at a low cost.

When this innovation was presented in the competitions, he won the first prize at the district and zonal level competitions. These threshers were also distributed among farmers in his district. 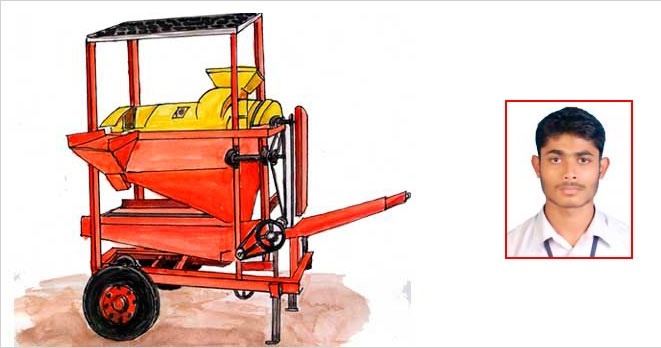 When Dipankar noticed women carrying water pots on their heads and on their waists, he decided to help them by building something that would facilitate the process. In order not to let the weight of the earthen pots trouble the women, he designed a wheeled trolley wherein the women can just place the pot on the cart and drag it ahead. Dipankar took a step further and developed an interactive panel for children to help them with learning new letters and words. He also developed a colour-coded thermometer, a paddy drier, a machine to collect mahua flowers from the ground, a device that differentiates artificial and naturally ripened fruits. Recently, he also developed an automated hand sanitiser that operates with voice commands.

Das made several notable innovations that received recognition at national and international levels. His Solar Pulse Thresher has won him the Dr APJ Abdul Kalam IGNITE Award – 2015 by the former President of India, Mr Pranab Mukherjee. The model also got nominated for the ASEAN – India Grassroots Innovation Competition held in Jakarta, Indonesia in the year 2018 where he bagged the second prize.

i have participated in INDIA INTERNATIONAL SCIENCE FESTIVAL 2020
AND I AM REPRESENTING MY COLLEGE L.J POLYTECHNIC AHMEDABAD#rural #innovator pic.twitter.com/LnF6iD4uXZ

More than the awards, Das felt contented and proud when his solar threshers were distributed to the farmers in his district. "I also want the farmers of other regions to use this model for their gain and reduce the cost of electricity that otherwise goes in threshing.”, he said.

Farmers' needs on his mind.

Dipankar says that he wants to help farmers through his innovations. He says that whenever he meets a problem, he travels to trace the roots of it. Once he knows the roots, he says, he can use his knowledge to solve them. Dipankar gives seminars in order to encourage students to focus on innovative ideas aimed at solving real-world problems. He relentlessly works towards throwing light on the government-sponsored schemes for innovation at the school level.

“In the future, I want to come up with even more economical solutions that offer a wide range of benefits to the members of our society. Most importantly, I want to see my parents living a comfortable life with all the facilities that I can offer them because they have done a lot for me.”, he said.

Das, who wants to make machines that solve problems in our society aims to make this world a better place to live.