Dropouts have greater ideas and this one is all for the benefit of the arm-less.

He dropped out of college and invested time in research. His bionic arm is helping upper limb amputees to enjoy their daily lives just like everyone else.
By: swetha_vangaveti
Published: 1 Years Ago
Last Modified: 1 Years Ago
Read time: 5 min read
Views  27

He likes to think of ideas and build them. He calls himself as an independent inventor whose main research interest is Mobile computing, Multi-agent systems, and robotics. His research topics are those that germinate from real-time problems. "I believe that a successful research includes both precise, novel algorithms and fully implemented and rigorously evaluated applications.", he says. Let's meet Prashat Gade, the man who is gifting arms to those who were born without them or who have lost them in an accident.

It All Started From Family:

Prashant Gade who hails from Khandwa Madhya Pradesh, loves his grandfather so much that his death shook him deeply. While attending his last rites, Prashant asked his mother why his grand dad's clothes were being removed to which his mother replied, "When we die we leave everything on earth, we don’t take anything along with us; even the richest people cannot take their money with them.” These words were rooted into Prashant's mind and he decided not to live life for himself but wanted to do something for society. Young Prashant always wanted to become an engineer and create innovative devices for the advantage of society. Thus, he joined in Electronics Engineering course but in his final year, he couldn't digest how scores and grades were given importance over application-based learning. Rote learning that demands assimilation of everything from books was given importance rather than practical approach that is required by an engineer. He thus dropped out of college.

In Pune, on one morning of 2016, Prashant happened to meet a seven-year-old girl who was born without arms. He was deeply moved by the girl's sight and wanted to give two prosthetic arms to her. He contacted a company that quoted a price of Rs. 24 lakh for both arms. Not only this, for every two years, the girl had to go for new pair of arms. This appalled Prashant and he understood why people couldn't afford prosthetic limbs. "Every year, more than 40,000 people lose their limbs and 85% of them are helpless and continue living their life without any solution. The reason was due to lack of affordable prosthetics and other required equipment. This is a serious problem that calls out for a solution and technology has the power to solve this problem", he thought. He decided to do something about it and enrolled in a six month FAB training course in Pune. As part of the training, Gade was searching for a project and he happened to meet a disabled French man named Nicolas. He learnt that Nicolas made an arm for himself after losing one in an accident. This inspired Prashant and he decided to take this as his project - to build bionic arms. 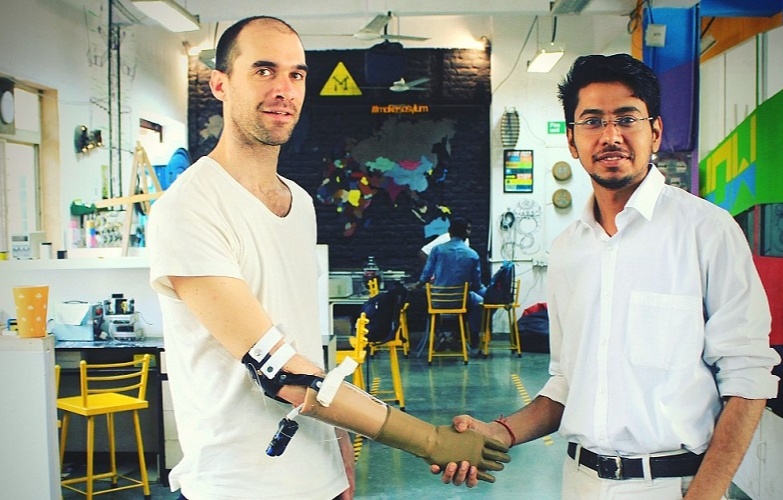 At the age of 23, Prashant started to build a prototype of the low-cost semi-bionic arm. After a few years of trials and re-trials, it ultimately led to the invention of Inali arm. Inali arm - an invention that dropped from his sweat was named after his girlfriend, who, he says, stood by him in every phase. With the sole objective to support people with upper limb disabilities, Gade started Inali Foundation in the year 2018. “Our aim was to provide affordable upper limbs to those who had lost them in an accident or don’t have them by birth. We also wanted to make devices which are technologically on par with other products that are available in the market internationally,” shared Gade. Inali Assistive Tech's focusses on upper limbs and other products related to upper limbs like elbow joints, wrist units partial hands prosthesis, etc. This happened after a lot of research for three long years. Currently, Inali has provided over 2,500 prosthetic arms to people from all across India - free of cost. 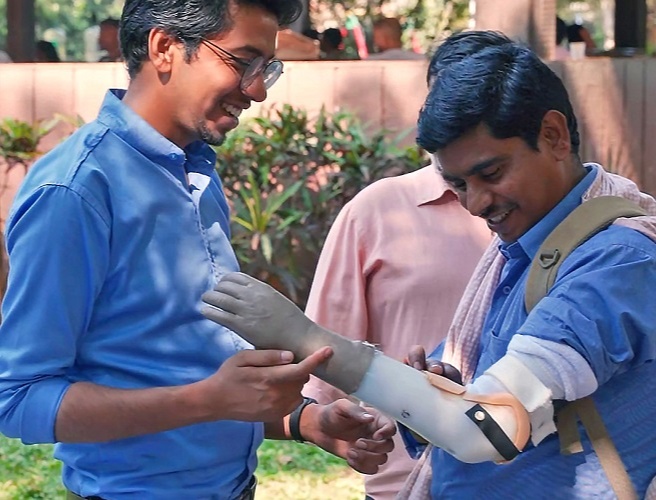 A number of people who are financially weak benefited out of Inali arms. Inali foundation has distributed two variants of upper limbs - cosmetic gloves and Mayo arm made of simple silicon. The entire limb made by Inali foundation is manufactured and assembled in India. The arm is battery-operated and can lift up to 10 kgs of weight. It can perform other simple tasks. The arms are durable for more than 3 years. The Inali arm has sensors that read signals from brain resulting in the movement of the limb, just like the prosthetic arms substituted by cost-effective material. Inali Arms is India’s most affordable bionic arm that is available for INR 50,000. Prashant travels to rural parts of India along with his team and organizes free electronic arms distribution camps for people in need.

When a decision like this is taken, challenges are sure to follow. Prashant's family couldn't initially digest the fact that he quit his academics and job to devote his complete time to make Inali arms. Another challenge he faced was to create an affordable arm within the price. Designing the circuits with best quality keeping the cost low was a major challenge that Prashat overcame eventually. When Gade travelled to Jaipur to get the real-time experience of this whole process, he faced many challenges like managing the rent, food, travel and other expenses. He also had to prioritize shelter over meals. He also ate just once a day sometimes.

All the challenges he faced were wiped off when Gade's Inali arm was tried and appreciated by his inspiration Nicholas Huchet. His low cost arm also impressed the technical secretary of Jaipur Foot, who gave him a seed grant to design seven such hands. When he received the cheque, he took a picture of it and sent it to his father who felt proud and happy for his son. Gade continued to reveive funds through various online campaigns and videos on YouTube. His work was recognised in the USA and a retired professor reached out to support him in the year 2016. They supported Gade by gifting 10 machines to take his work ahead.

Prashant wants to reach out to upper limb amputees in the rural areas. "I am visiting the government to understand needs and requirements and the standards they have set,” explains Prashant. He also said that the team is working on other projects as well. “Following the guidelines by the Rehabilitation Council of India (RCI), we are planning to work on certain other projects for people with lower limb amputation, paralysis, wheelchairs and are trying to make them advanced but affordable. We are also trying to introduce individual finger movement, wrist and shoulder movement in the prosthetic arm.” He plans to design myoelectric upper limb prosthetic arm, such that sharp finger movements can be performed just like normal arm.

We wish Prashant Gade who proved that it is all the zeal and will that requires anyone to make anything worthy. Thanks to his initiative that numerous people, who thought that having prosthetic arms is a dream for them, are now using them to do their regular activities. May this man who is gifting smiles in the form of arms continue to receive constant support and co-operation. 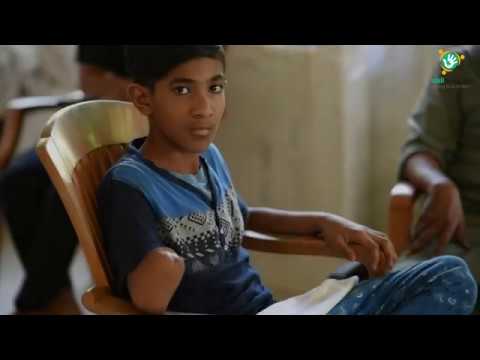