Doc who is disabled is striving hard to preserve the rights of the disabled in every possible field.

International Day of Persons with Disabilities, the 3rd of December. This day aims to promote an understanding of disability issues and extend support for the dignity, rights and well-being of persons with disabilities. "This day also aims to increase awareness of gains to be derived from the integration of persons with disabilities in every aspect of political, social, economic and cultural life". We bring before you the story of a prominent disability activitist who laid out immense efforts to make public places accessible to disabled people. Not only this, he played a key role in changing the face of several spheres when it comes to making them easy-going to people with disabilities. He is also the first ever Indian to win the prestigious Henry Viscardi Achievement Award that is presented to extraordinary leaders in global disability community. He is Dr. Satendra Singh and this is his story. Before we step into knowing about the contributions of Dr. Satendra Singh for the disability community, let's take a look at his personal, academic and professional backdrop.

Disabled With Body At Nine Months But Strongly Abled His Mind Right Then:

At the age of nine months, Dr. Satendra Singh contracted Poliomyelitis. That means he is destined to remain disabled for the rest of his life. But, what disability is going to stop an able mind? Satendra determined to study medicine and worked hard. He completed Bachelor of Medicine and Bachelor of Surgery from Ganesh Shankar Vidyarthi Memorial Medical College, Kanpur and went on to pursue Doctor of Medicine in Physiology. He is currently working at the University College of Medical Sciences and Guru Tegh Bahadur Hospital, Delhi. Dr Satendra Singh was involved in the synthesis of epibatidine analogues that led to the discovery of epiboxidine, a compound used in scientific research and also as a parent compound to derive newer analogues that are safer having greater potential for clinical development.

Now let me take you through the vast contribution made by Satendra Singh towards securing the rights of the disabled. 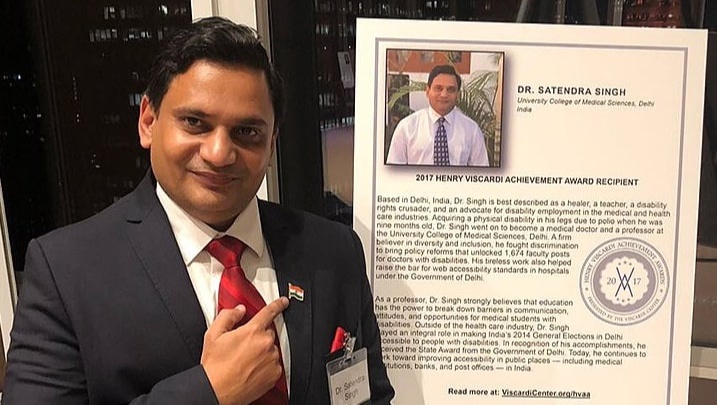 It's Not A NO Anymore For A Differently-abled Doctor And Medical Students:

Satendra Singh fought not only for his own but also for the rights of other disabled doctors. The discrimination laid out by UPSC by disallowing doctors with disabilities to apply for various Central Health Services (CHS) posts was brought into spotlight by him. He got rejected in 2014 for the same but fought back and got permission to appear for the interview later. The same happened in 2013 as well. Through his RTI, he learned that doctors with disabilities are considered ineligible for specialist CHS posts in teaching, non-teaching as well as public health specialist cadres. Disappointed with this, he wanted to raise his voice. He complained and requested the health ministry to allow all eligible doctors with disability to apply for these posts. His relentless fight for over four years finally made Health Ministry to release 1,674 specialist central posts for disabled doctors.

Satendra Singh has challenged the unfair guidelines laid by the Medical Council of India by filing a writ petition in the Supreme Court of India. Thus the bar on admission of candidates with specified disabilities was lifted. With his petition to the Court of the Chief Commissioner for Persons with Disabilities, under Ministry of Social Justice and Empowerment, Government of India instructed Medical Council of India to issue directives to all the medical institutions in India to be disabled-friendly. Though most medical institutions must still stick to the directions, his efforts are invaluable in changing the facilities made available to the disabled people. His Black Armband Protest in 2012 organised on the United Nations' International Day of Persons with Disabilities has led the authorities to construct ramps outside all the hostels at his medical college. 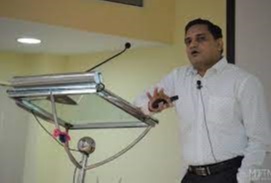 When Union Public Service Commission’s format asked disabled applicants to paste photographs showing their disability as a proof, Dr. Satendra challenged it at the Court of Chief Commissioner for Persons with Disabilities. The court then directed the UPSC to refrain from asking disabled candidates to submit photographs and passed a decree to consider the ‘permanent disability certificate’ issued from a government hospital as a valid proof. This step taken by him led to the withdrawal of similar profarma followed by IIT JEE.

Dr. Satendra Singh's activism also led to the initiation of web accessibility of all hospitals under the Government of Delhi. He along with his colleagues started the medical humanities movement in India. Dr. Singh has set up the Enabling Unit for the diabled people and founded the Infinite Ability, which are the first ever such bodies in any medical college in India. He also organised the 'Theatre of the Oppressed' workshop for medical students in India and also played a key role in organising 'Blind with Camera' workshop for the visually impaired and blind students of the University of Delhi in 2012.

Solution At The Polling Booths And The Airports:

Dr. Satendra Singh, like no other has ever done before, raised the issues faced by the voters with disabilities before and during the 2013 Delhi Legislative Assembly election through Right to Information. He wrote to both the Election Commission and the Chief Justice of India requesting that the disabled voters be voting again before the final results are declared. Due to his RTI, the negligence of the Election Commission of India with respect to enfranchising the voters with disabilities was revealed. After this incident, Delhi involved him in making elections in Delhi disabled-friendly. From then on, Dr. Singh has laid down efforts to train the election officers in helping voters with disabilities and also played a key role in setting up a disability registration helpline. It is because of his efforts that the polling booths became easy to access to the disabled and the elderly. The Disability Court also ordered the Election Commission of India to make its website disabled friendly. 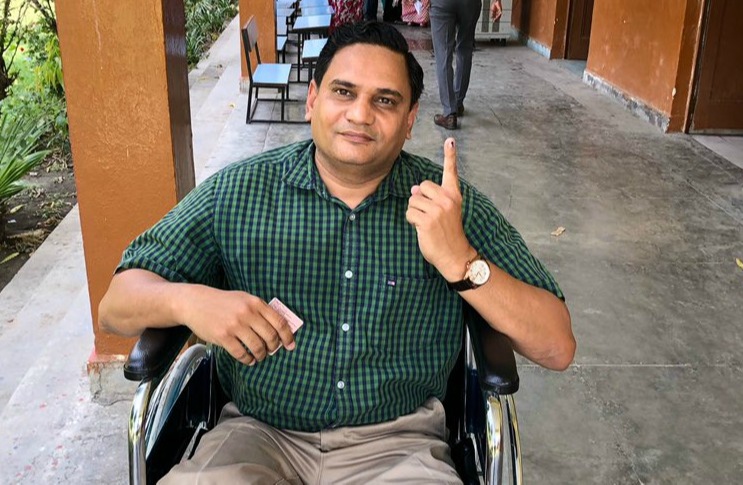 When Dr. Satendra Singh was harassed by the security personnel at the Hyderabad airport because of his orthosis, he approached the Directorate General of Civil Aviation (DGCA) and Bureau of Civil Aviation Security (BCAS) requesting to make ammendments to the screening procedures and to change the guidelines considering the Convention on the Rights of Persons with Disabilities. The disability watchdog has directed both DGCA and BCAS to ensure that people with disabilities are not humiliated at airports and that the security personnel are sensitized towards them. Though the Central Government provides excise duty concession to disabled customers, Maruti Suzuki denied him the concession on the pretext of right leg disability which was both discriminatory and against law. Thus, Dr. Satendra Singh fought for justice which led the Ministry of Heavy Industries and Public Enterprises to amend the rules, quashing manufacturer's certificate and allowing RTO's certificate alone. Also, if the capital city has ramps at the ATMs and post offices, it is because of the awareness raised by Dr. Singh through Right to Information Act.

On Election Commission of India's National Voters' Day 2021, for his efforts to make polling booths accessible to the disabled and the elderly, Dr. Singh was honoured with National Award by the President of India. He was conferred with the State Award by Delhi Election Commission on National Voters Day 2020 for making the General Elections 2019 inclusive and accessible. He received the Medical Personality of the Year' Award by Delhi Medical Association in 2017. The first ever Indian to win the prestigious Henry Viscardi Achievement Award that is presented to extraordinary leaders in global disability community, is also the first Indian to be awarded the MacLean Center for Clinical Medical Ethics fellowship at the University of Chicago.

Hats off to the man who has been relentlessly fighting for the benefits of people with disabilities. On this day, let's bow to his brave spirit for not just accepting what's destined to him but has challenged for what he is rightfully entitled to. Not only raising voice for himself, his activism has also been making the lives of other people with disabilities too, liveable. 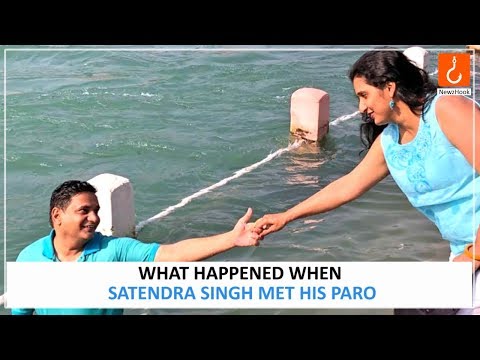