"Believe in your dreams and never give up. Stay focused on your work. Give your best in whatever you do. The results will come.", says a once tea stall man who followed exactly the same and has become a successful entrepreneur today. He is neither the son of a tea seller nor a child deprived of education. Having given exams for CAT, this youth still chose to sell tea on the roadside. Prafull Billore, the MBA Chaiwala, (Mr Billore Ahmedabad) is the hero of this story.

Prafull Billore who hails from a small village in Madhya Pradesh pursued his graduation in Commerce. During his graduation days, Prafull never worried about studying hard and competing with the toppers. He studied wisely and worthily. While pursuing his graduation, he worked as a salesman for Amway and earned up to Rs. 25000 per month. Though he found selling the products and joining new members in the company quite fun-filled and interesting in the beginning, he later quit the job once he found no future prospects in it. He then decided to pursue MBA after his graduation and aimed to shoot for the CAT exam.

“I was attracted by the handsome packages offered to MBA graduates,” says Prafull. He then shifted to Indore, stayed as a PG and prepared for CAT. Though he received spoken English training as well as studied hard for the CAT, he couldn't secure good marks so as to be admitted into any of the top colleges. He decided to appear for the exams again without giving up. "In 2017, I got 82 percentile but it wasn’t enough to get a seat in any of the top colleges I had in mind,” says Prafull.

He decided to give up his dream of pursuing an MBA instead of settling for lesser ranked colleges.

The First Job And The Last Too:

While his family started bringing pressure on him to join some college, he decided to explore the country and find his way of living. With a sense of some purpose in life, he stepped in Ahmedabad because he knew that Gujarat was the right place to start any business and he wanted to start one. And you know where he chose to stay? In a room as a PG just outside IIM, Ahmedabad, the campus where he wanted to see himself as a student of MBA.

Eventually, he found a job at McDonald’s.

“I took up the job of cleaning utensils and putting fresh foil papers on plates. I earned around Rs 32 an hour and worked for 10-12 hours every day. I used to earn around Rs 300 daily,” he recalled.

While he was working at McDonald's with dreams of starting his own business, he read a lot of motivational books. He understood that big business tycoons across the globe started just like him. This job at McDonald's taught him to work etiquette, humility and courtesy along with showing him a lot of business tricks.

A Venture Of His Own - Roadside Business:

He worked at McDonald's for three months and finally decided to start his own project. Initially, he thought of borrowing INR 10-12L from his father and open a restaurant. But then, he realised the risk factors behind it. With the fear of incurring losses, he decided to start with something small. With belief in the concept of "Dream Big, Start Small, and Act Now’', he lent a sum of Rs.8000 from his father in the name of doing a course in export and import. He took 45 days to pool up the courage and finally opened a tea stall on 25th July 2017. Since he didn’t rent any space, the investment was low. He just used the little amount he borrowed from his father to buy utensils, tea packets and milk. Initially, he worked in McDonald’s in the mornings and opened the stall only from 7 PM to 10 PM. 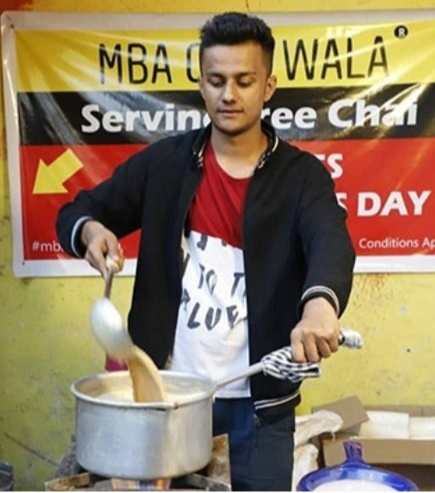 Prafull's tiny roadside stall is still kept different from the other tea stalls. He served tea in earthen pots along with toast and tissue paper. He sold the combo at Rs 30. He approached people in cars and asked them to try his tea. “I introduced myself in English and urged them to try my tea. People used to become awestruck at a tea seller speaking English and they purchased from me,” he says.

He sold five cups on Day 1 making Rs.150 while on the second day he sold 20 cups making a sum of Rs. 600. In the span of a month, he started selling 10,000-11,000 cups every day. When a YouTube video was made on him and his successful business, his family came to know about it. They responded negatively at first but later supported. Prafull soon left his job at McDonald's and concentrated full-time on the tea stall. 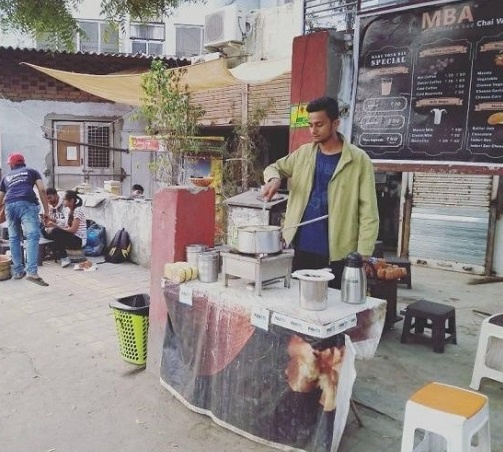 Jealous Eyes Could Only Give Better:

Other tea vendors in the area, unable to look at his flourishing business, hired goons to force him out of the place. Prafull shut his tea stall and shifted it to another place, this time with a proper outlet that had a big verandah. The new locality also had a lot of colleges and offices. He grabbed the opportunity and included a wide range of items in his menu like snacks, shakes, coffees, varieties of tea. He also made his tea stall a networking platform for young people offering them space to post ads regarding jobs and other information. He also organised small events like musical nights and entrepreneurship programmes. And Boom! He got the love of youth! In 2019, he opened a full-fledged restaurant in a 300 sq ft area. He also started to set up tea stalls at political rallies naming the tea after the respective parties with who he tied up!! The intelligence of a business mind! Isn't it? His private limited company employs around 20 people now and has registered a turnover of Rs 3 crore in 2019-20.

Prafull, who could not study his dream MBA course, did not keep his spirits low. If not the dream of getting into IIM, he dreamt a new dream and now became so successful that he shares his success stories on various platforms to motivate others. Prafull is being invited by different colleges to deliver motivational lectures and guess what, he delivered one in IIM, Ahmedabad too.

When many youngsters feel extremely low and do not think walking beyond failure, Prafull showed everyone what it is like to have a plan B when plan A fails. So, what are you thinking of folks? Do we need more than this to get our spirits going?