Kimmu's Kitchen is the start-up of Thane's woman at 50. Aims to supply tasty village ghee to the cities of India. Wants to give back to the society.
By: swetha_vangaveti
Published: 1 Years Ago
Last Modified: 1 Years Ago
Read time: 5 min read
Views  39

When life puts you in life-and-death situations, we realise how important it is to make the best use of what we have. We understand the importance of counting the blessings we have had until then. We realise the significance of what life is and how to make constructive use of it. Sometimes, near-death experiences bring a whole new perspective to people's thinking and their approach to life changes. The same thing happened with Kamaljit Kaur. When she fell prey to COVID-19, she thought that it's all over. But when she recovered, she felt thankful for having got a second chance to live. This time, she didn't want to just lead her life but wanted to make a difference. This change in her thought process brought out the entrepreneur in her at the age of 50.

Nature Is Her Teacher:

Kamaljit Kaur is a 50-year-old woman who currently lives in Mumbra, a dense suburb that spreads to over 5 km in Thane, has made her mark as an entrepreneur. Mumbra, the place where she lives, has a population of close to 14 lakh people. However, she was born and brought up in a small village called Jahangir in Ludhiana, Punjab and has not received any formal education. Her family primarily depended on agriculture. Kamaljit grew up watching her mother and aunts preparing ghee manually. After she got married and moved to Mumbai, she saw the same happening at her in-law's place also. Though Kaur has come to live in Thane, the memories of her native where she spent a good time in the lush green fields didn't leave her. She always had the opportunity to consume homegrown vegetables, fresh milk sourced from the buffaloes at their farm and ghee prepared manually in her house. She spent her life after marriage in her in-law's house in Mumbra where she got away from nature's lap. However, the act of manually preparing the ghee was practised at her in-law's house too. In 2019, Kamaljit Kaur was affected by COVID-19 and that came as a blow to her. Post her recovery, she thought that life has given her a second chance and that she has to put it to the best use, doing something to carve her identity. As she wasn't educated, the only work she knew since childhood was ghee preparation. It is then that Kamaljit noticed that the true essence of her native ghee is missing in the suburbs of Mumbai and decided to venture into the ghee business. She resolved to bring the "freshness" of her village ghee to the cities of India.

I have grown up seeing my mother and aunts making ghee. Agriculture was the main occupation. I was inquisitive about how it was made manually every day. After I got married, I saw my in-laws doing the same,” Kaur said.

Kamaljit Kaur who had no formal education or experience in business, didn't think of anything but to supply the goodness of village ghee to the city population. With the support of her husband and children, she laid foundations for Kimmu’s Kitchen. Kimmu's Kitchen is a start-up that aims to supply farm-fresh ghee that is free from additives, preservatives or chemicals. Kaur uses the traditional Bilona method imbibed by her mother and aunts in the village to prepare the ghee. She started with sourcing milk from Mumbra and prepared the ghee. She was not satisfied with what she got. She distributed the excess ghee to friends and family who loved it so much but Kamaljit could not feel the goodness of her desi ghee in it. She herself was not satisfied. She thought that the freshness of milk or the feed given to the cattle could be the contributors to the ghee's better taste back in her native, which is missing in Mumbra. This time, she decided to work it out from Jahangir itself. They got few more buffaloes, hired employees to prepare ghee which was then transported to Mumbai. At Kimmu’s Kitchen, ghee is made using the traditional Bilona method in which the milk is first converted into curd, which is further churned into cream and then ghee is made out of it. 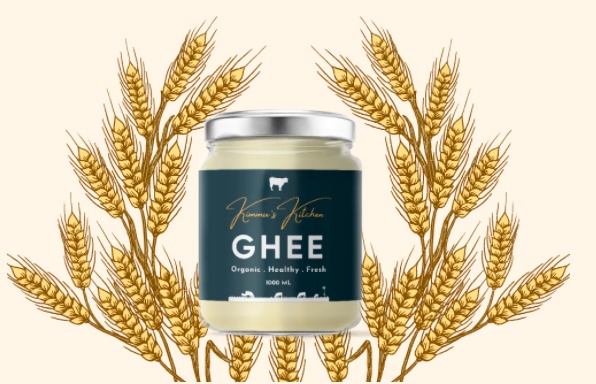 The whole process is carried out manually without the use of any machines. “The idea took root in December last year and after sampling, we launched the website by January end and started marketing the product. After recovering from COVID-19, Kimmuji wanted to give a healthy product to society.”, says Harpreet Singh, Consulting CTO with Kimmu’s Kitchen. Further talking about the ghee market in India that's never static, Harpreet says, "The demand for ghee far outweighs the supply and popular brands have to resort to importing of cream blends to cater to the demand. What you often get is ghee made from a blend of cream from goat’s milk, camel’s milk with buffalo or cow’s milk. But it’s not their fault. Even if milk is sourced from all the farmers in India, it still will not be enough to meet the demand for ghee,” But Kamaljit wants to distribute ghee that is pure, healthy and tasty as it is the main ingredient in Indian food which is also given to expectant and new mothers and also to infants. Kaur says that the ghee she supplies is straight from her farm. It is light, non-greasy and has an amazing aroma. She also says that it's easy to digest. She explains, “Since we have our own farm and buffaloes, we don’t have to spend much other than the labour involved, which enables us to sell it at a lower rate.” To spread the word about the desi ghee being sold by Kimmu's Kitchen, the team, along with taking up social media marketing, also took up ad spots in a local newspaper and channel in Mumbra. Harpreet says that the response has been amazing and the orders are repeating. Currently, ghee from Kimmu’s Kitchen is available through its website. “We have not thought much about strategisation, but are thinking of a subscription model for repeat customers, according to the frequency they prefer,” Kimmu says.

Not Just Business But A Give-back:

Though Kamaljit Kaur has become an entrepreneur at the age of 50, she says that she wants to give back to society and in that way, she wants to express gratitude for her survival chance. “I wanted to also give back to society. We see a lot of poverty in our area. When we reached our first milestone, we used the revenues to distribute food to the needy during Ramzan. We hope to continue this on a monthly or a quarterly basis,” she said.

What an amazing story! We wish the goodness of village ghee from Kimmu's Kitchen reach all the cities of India and may Kamaljit Kaur flourish and continue to give back to society.