The signature tune of All India Radio is created by a European. A Jewish refugee who lived in Mumbai for 14 years is the man behind the iconic tune.
By: swetha_vangaveti
Published: 10 Months Ago
Last Modified: 9 Months Ago
Read time: 4 min read
Views  225

I was watching a movie one evening and one of its scenes played in the background, the iconic All India Radio tune. I have heard this tune several times ever since my childhood but never have I thought of it so deeply the way I did that evening. I wanted to know who composed it and that quest set me into immediate action. What I learnt amazed me, in fact, I was wide-eyed knowing of the person behind the iconic tune. Until then, I thought, surely like the majority of my fellow Indians, that the composer is an Indian. To my surprise, it is not! The composer behind this melody in the raga of Shivaranjini was in fact a Czech man! He is Walter Kaufmann. We would like to present before you, the story of this Jewish refugee who came to live in India and explored the richness of her musical roots, also contributing in his style, to her rich heritage of music.

Music In Every Walk Of Life:

Born in 1907 to Julius and Josefine Antonia in Karlsbad in the former Czechoslovakia, Kaufmann’s higher educational choices reflect his love for music. He graduated in the year 1930 from the Staatlich Hochschule für Musik in Berlin and went on to pursue Ph.D in musicology at German University in Prague. However, Walter refused to take the degree when he learnt that Gustav Becking, one of his teachers, was the leader of the Nazi Youth Group. From 1927 to 1933, he conducted summer seasons of Opera in Berlin, Karlsbad and Eger. When Hitler invaded Prague in 1934, Walter was 27 years old. He left his hometown and took refuge in Mumbai, India but without an intention to stay long. However, he stayed in Mumbai for fourteen years. After he came to stay in India, his initial days as a trained musician were a little disappointing, as he thought, he would immediately be taken for his talent, the reality being different.

The Refugee’s Association with AIR:

After seeing ebbs and flows for a couple of years, it was in 1937 that Kaufmann found a right platform to showcase his talent. He joined the All India Radio in 1937 where he got the opportunity to work closely with some of India’s greatest classical musicians. It was then that he got to explore the roots and essence of Indian classical music. He also mentioned in one of his writings, his observations of the Indian musicians of the day and wrote, “Most of the older artists refused to accept their remunerations in the form of cheques. They insisted upon receiving bare coins. It was interesting to note that some of these great and wonderful musicians would bring along with them a young boy, a son or a nephew, who was able to count the rupee coins reliably. The old artist and his young helper would settle on the floor outside the studio and carefully count the money received which had come in a little cloth bag.” It was during this association with AIR that Walter Kaufmann composed the signature tune along with the prominent Indian orchestra conductor Mehli Mehta, who gave his violin contribution to the tune.

Click Here To Listen To All India Radio Signature Tune

Kaufmann coupled the mastery he has in western music to suit the contemporary tastes and his excellence gave birth to an array of operas, ballets, chamber music works and also film numbers. Majority of his compositions were performed by the Bombay Chamber Music Society; Ten String Quartets, Three Piano Trios, Indian Piano Concerto, Six Indian Miniatures and Navaratnam – to name a few. It was the time when Indian film industry started to upgrade from silent films and Walter’s music found great place in them. He worked for Bhavnani films and for Information Films of India. He met Mohan Bhavnani, for several of whose films, he composed the background music, in Berlin. One of his amazing compositions with Indian fragrances was Anasuya, which was described as “India’s first radio opera” came up in 1939, Walter Kaufmann also lectured at Sophia College. His friend, the eminent scientist, Albert Einstein, wrote a recommendation letter in German, on 23rd January 1938 for Walter. “Mr Walter Kaufmann of Prague, currently in Bombay (India), has been known to me for years as an inventive and gifted musician. He has already written many compositions, he is an authority on Eastern music, and he has had extensive experience as a teacher as well. With his youthful energy and likeable nature, he would be eminently suited for the position of director of choirs and orchestras in schools or universities.”

A Life Dedicated To Music:

Walter left India in the year 1946 and went to England to spend there for one year. He was a guest conductor at the BBC. He then moved to Canada and was the Musical Director and Conductor of the Winnipeg Symphony Orchestra, Winnipeg, Manitoba, Canada. He moved to the US in 1957 and joined the School of Music faculty at Indiana University in Bloomington where he wrote about Indian music. He breathed his last in the year 1984.

It is quite interesting that the tune that majority of the Indians connect with, is created by a European – a Jewish refugee. Is this not enough to provide strength to the fact that music has no limits? 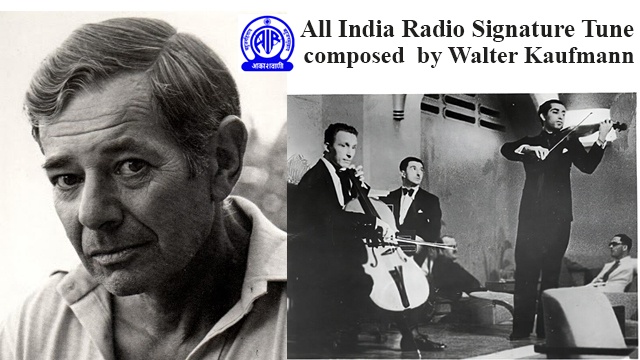