Class IX student of ZPHS school is alerting people of coronavirus through her smart band, truly a smart scientist.

A student with an innovative mind hasdesigned a smart watch to keep Covid away. A Math teacher and an environmentalist.
By: swetha_vangaveti
Published: 2 Years Ago
Last Modified: 2 Years Ago
Read time: 6 min read
Views  39

"When you have the never ending desire to do good, the world walks with you and you are sure to receive helping hands to keep you driving". This is true in the case of a class IX student of Telangana. She is an epitome of empathy and her mind always weaves thoughts about how her education can benefit the community. She makes the best use of all the resources she has and relentlessly strives for a sustainable society. During these pandemic times, this little master mind created something that's the need of the hour. She is A. SRIJA and this is her exciting journey.

The Royal Oak From A Rural backdrop:

A small village called Chintalakunta in Jogulamba-Gadwal district of Telangana has a Zilla Parishad High School. Thirteen-year-old Srija, a student of this school, along with her mathematics teacher is innovating utilitarian products and is celebrating her unsung village. What has she been doing that is flying her village's flag high?

A Weapon To Battle The Virus:

Along with researchers across the globe, entrepreneurs are doing their best to come up with their innovations that help the community in its fight with the Covid-19. On the other hand, even students haven't remained lame in this race!! They are surprising the world with their miraculous solutions. On the same note, Sreeja created a device that detects the movement of hand and alerts the person wearing it whenever he attempts to shake hands with others or tries to touch his face. As Corona virus can spread through handshakes and as the degree of vulnerability if one touches his face with hands is high, it is very important that people are to be repeatedly warned about physical separation and not touching their face. In this context, Srija has created a smart watch by attaching a battery, plastic cap, and an iron ball to a normal watch. When the hand is raised, the iron ball would move bringing the positive and negative terminals of the battery together. This emanates a buzzer sound and alerts the person wearing the watch. The manufacturing cost of the device is Rs.50. 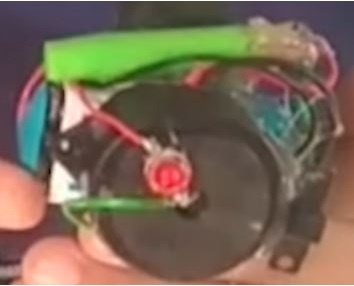 Victory Followed By A Set Of Futile Attempts:

The idea of building an alert system struck  her when her teacher was throwing light on precautions to be taken by everyone in the view of COVID-19 pandemic. While everyone was asked to stay home, Sreeja thought about her father who is compelled to go for farming. She then made a face mask out of plastic but later realized that it gave a lot of sweat and discomfort leading her father to periodically touch his face. This, Srija thought of devising something that would alert people while they are about to touch their face. She collected some information and ideas from the books in her school library, figured out the timing of the buzzer. Initially, she tried to place at the elbow as it is the interjection point to the to and fro motion of the hand but when she tried it on people, they complained of discomfort. With the assistance of her teacher, she came up with the idea of a smart ring but that too failed. Then, she approached Jambaiah, an electrician in her village who helped her in devising a band with plastic cap, speaker, iron ball, and two connecting wires. Thus, a device that alerts with a buzzer while we move the hand to and fro took shape. The Telangana State Innovation Cell (TSIC) took to Twitter to let the world know about the young innovator and her contribution. "Innovation for me begins when I think differently. I then decided to devise a smart alert system,” she says.

Sreeja is a #StudentInnovator from @GadwalDist, #Telangana who has created a smart watch that helps detect the movement of hand whenever a Covid-19 patient tries to shake his/her hand or even tries to touch his/her face. The device costs ₹50/- only. @KTRTRS @Coltr_Jogulamba pic.twitter.com/A54mQZlXzb

Innovation, for Srija, is not just presenting  new ideas but to identify the available resources in her community and create sustainable solutions out of them. On 19th March, 2020, when Srija was digging a pit in her school to plant a sapling, she found a polythene bag attached to one of the previously planted saplings. She understood that the sapling was planted along with the polythene bag with a notion that of the polythene bag was removed, the roots of the plant might get dissociated and not firmly fix together. Polythene bags are used in nurseries to propagate saplings. Thes, being non-degradable, are harmful to the environment and contaminate soil and water, are transmitted to animal tissue, and finally enter the human food chain. Srija also learnt during her research that these plastics are used without paying heed to the directives of the Union Ministry Of Forest and Environment. Thus, she resolved to look for alternatives to plastic bags. Her father's farming background helped her in this. She learnt about the use of groundnut shells that are rich in many compounds like cellulose, hemicelluloses, and lignin. They are a great source of Nitrogen, phosphorus, and calcium and act as organic manure for the plants, providing micro and macronutrients. Therefore, Srija, along with her teacher-mentor Augustine, decided to make bio-degradable pots out of groundnut shells. They requested farmers to supply groundnut shells to manufacture bio-degradable pots instead of burning them. They worked relentlessly to replace conventional polythene bags with bio-degradable pots and reduce plastic usage by around two million tons every year throughout India. 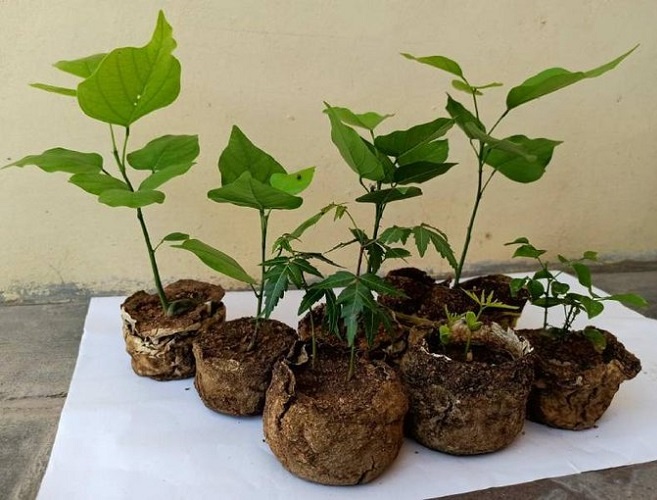 Mr. P. Augustine, the school assistant from Zilla Parishad High School (ZPHS), told that the survival rate of a plant is more when planted in these pots.

The groundnut shell pulp was submitted to the T-works with the help of Telangana State Innovation Cell (TSIC) for the validation on rigidity and once approved, Srija wants to market it.

Chintalakunta's ZPHS High School has only one teacher and it is Mr. P. Augustine, who also takes up the role of additional in-charge headmaster. As the school has no other teachers apart from him, he chose a few smart kids to teach some subjects to the younger students. By this, he is not only filling the gap but also instilling leadership qualities and useful personality traits in children. He guides the student-teachers personally by giving them teaching notes and observing them while taking classes. Srija's contribution to the school in this aspect is also worth mentioning. She teaches mathematics to the younger students of her school. Srija, who wants to become a teacher in her school, has realized that teaching is a noble profession while teaching her co-students.

This young school girl who is thinking for a sustainable tomorrow, is surely going to be a diamond in the nation's crown. Innovation is considered fruitful when it benefits the generations to come. An innovator who keeps in mind, the consequences of tomorrow, is the need of the hour. We wish Srija, one such young innovator, the best of everything.