Meet the man who learnt four Dravidian languages to create a dictionary.

Sreedharan was familiar with two languages- Malayalam and Tamil. He thought of learning two other major Dravidian languages — Kannada and Telugu. While he himself is a Malayali, he learnt Tamil during his work at a Beedi factory. He learnt Kannada from his colleague Govinda Naik and writer-friend C Raghavan. Also, to learn Kannada, he travelled to Mysore and stayed there for several weeks. There, Taliparamba, Eshwaraprasad Rao, an officer at the District Agricultural Farm, and his wife Seethamma taught him Telugu. He later travelled to Nellore in Andhra Pradesh and interacted with language experts and writers to learn Telugu. But why is Sreedharan so keen about learning languages? To know about this, we should first get to know about 82-year-old Njattyela Sreedharan and his passion. Without any further ado, we will take you into his journey.

No Formal Education But There's Love for Learning:

Sreedharan was born in Thalassery, Kerala in the year 1938. He dropped out of his school in his fourth standard and started working in a Beedi factory in Palakkad. It is where this Malayali learnt Tamil. While he worked in the factory, he studied all by himself and passed the ESLC examination privately. During his young years, he spent a lot of his free time studying and also teaching others as a part of literacy programs. While studying languages, he mainly focused on the writing style, grammar and colloquial usage. He wrote various articles for Malayalam dailies and magazines that dealt with the aspects of ‘'popular linguistic norms in Malayalam." In his later years, he worked as a blue printer in Kerala Public Works Department where he got acquainted with Dr T. P Sukumaran, a professor at the Nirmalagiri College. Dr Sukumaran advised Sreedharan to "compile a dictionary of colloquial usages of words in Malayalam.’' As Sreedharan was familiar with only Malayalam and Tamil, he decided to study the other two Dravidian languages, Kannada and Telugu and then set on to compile a dictionary connecting all these four languages. 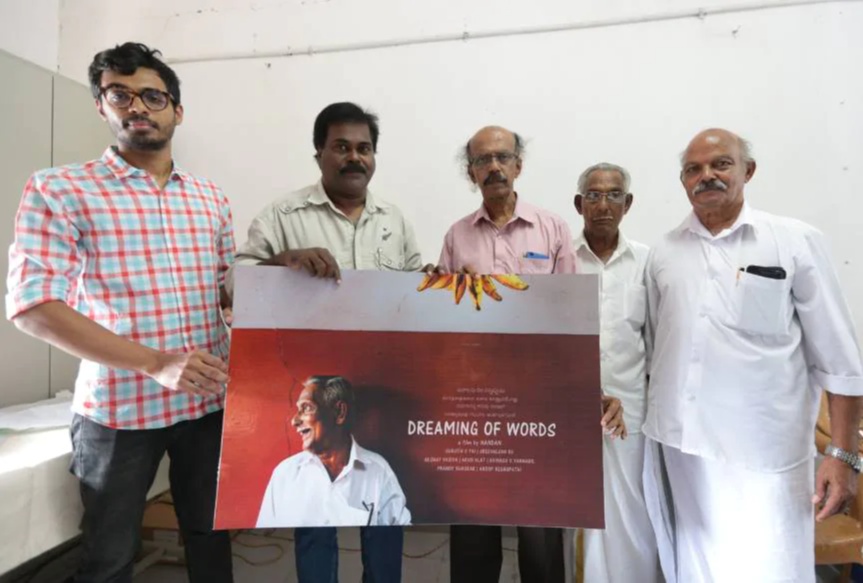 Sreedharan retired in the year 1994. Post his retirement; he directed all of his time and energy towards compiling the dictionary. He referred to various dictionaries and because of his deep knowledge of languages; he pointed out mistakes in other dictionaries and corrected them. He spent from 6 am to 10 pm everyday on this without interacting with anybody or not even getting distracted for basic things during the day. This went on for several years. He compiled his dictionary in such a way that for each Malayalam word, there is a corresponding word in Kannada, Telugu and Tamil. The wonderful part of this dictionary is that synonyms for a word in Malayalam are provided in all the other three languages. Thus there are a total of about 1.25lakh words in his dictionary.

The dictionary that was created by putting in intense efforts has seen major roadblocks to hit the outside world. Sreedharan struggled hard to get a publisher owing to many factors, the low economic status and no formal educational qualifications bring the major ones. He approached several private publications but was refused by everyone. He finally submitted the dictionary to Kerala Bhasha Institute (The State Institute of Languages) which published the dictionary just in two languages, Malayalam and Tamil instead of four in 2012 as they found it difficult to proofread due to lack of experts in the field. The thorny path pricked Sreedharan, even more, when the handwritten dictionary went missing at the institute. Sreedharan filed a legal notice and in 2014, the dictionary was retrieved. Another copy of the dictionary is with the Kerala Sahitya Akademi. Sreedharan could make his dream come true with the efforts of the Senior Citizens Forum in Kerala and the complete dictionary including the words of all four languages was published on 1st November 2020.

25 years of sweating ink to ensure the outcome of a linguistic masterpiece that helps the generations to come in ways innumerable is commendable. Hats off to this linguistic genius who never gave up. He's truly an inspiration to those who are afraid of long-term goals.