An IITian, a US returnee and a Professor who designed and built a standing wheel chair for the specially-abled.
By: swetha_vangaveti
Published: 2 Years Ago
Last Modified: 2 Years Ago
Read time: 5 min read
Views  285

Walk through the enormous campus of IIT, Madras and get into the Department of Mechanical Engineering. You will find a lady of steel who heads the CENTRE FOR REHABILITATION RESEARCH AND DEVICE DEVELOPMENT (R2D2). Infact, she was the one who laid the brick for this centre. There, you will see genius minds and skilful hands working on small and large machines dancing those iron tools amidst their able fingers. Under the supreme supervision of Prof. Sujatha Srinivasan, the team works hard, come rain or sunshine, to develop devices that benefit the disabled. 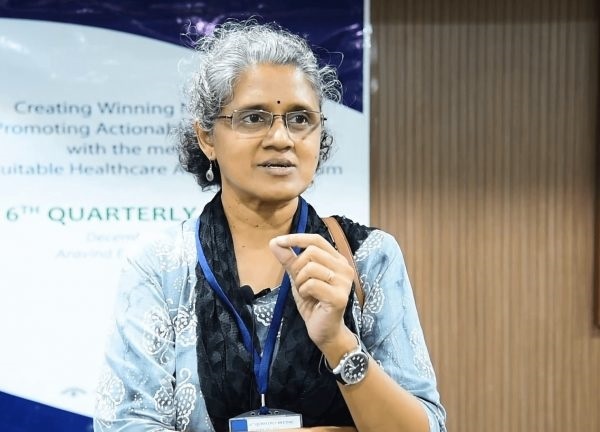 The One woman among Sixty:

Sujatha Srinivasan lost her solid support system, her father, when she was 15. However, her mother, who has never worked outside the home before, took up a job to keep the children’s' education going. In a city like Delhi which isn't a safe habitat for a girl to grow up, her mother bravely managed to raise Sujatha and her brother all alone. May be here is where Sujatha must have derived a courageous bone from!! A diligent student and a pro at Mathematics and Sciences, Sujatha wished to study in Delhi College of Engineering. However, her mother felt that they should move closer to their family back in Madras. So, eventually the family shifted to Madras. As she couldn't fare well in JEE and Tamilnadu State Entrance Test, Sujatha had to take up B.SC Maths. However, she received a letter from an Engineering college in a small town in the middle of the year and after approval from her mother, Sujatha had joined the engineering college. Again, things didn't work out well and she experienced severe culture shock. She did not like how girl students were expected to wear only sarees. Feeling regressive, she started to look for ways to get out of that chawl. The only door in front of her was JEE. She toiled night and day, finally secured a good rank that opened the gates of IIT, Madras for her. Started pursuing Mechanical Engineering, she topped her branch in the first year and had decided to switch to Computer Science or Electrical Engineering. But, thanks to one of her seniors, who stopped her from doing so. She mentored Sujatha and convinced her to continue in Mechanical Engineering. Slowly, Sujatha realised her passion and love for the subject and started going extra miles to achieve something big. She was the only woman student out of a class of 60 but she made her mark in everything that she shouldered including the final year project that, she thought, should have tangible benefits. Her project was to design knee joints for polio braces that lauded her with the Best B.Tech Project Award. She was not 1 out of 60 but the courageous one in a million!! Isn't she? 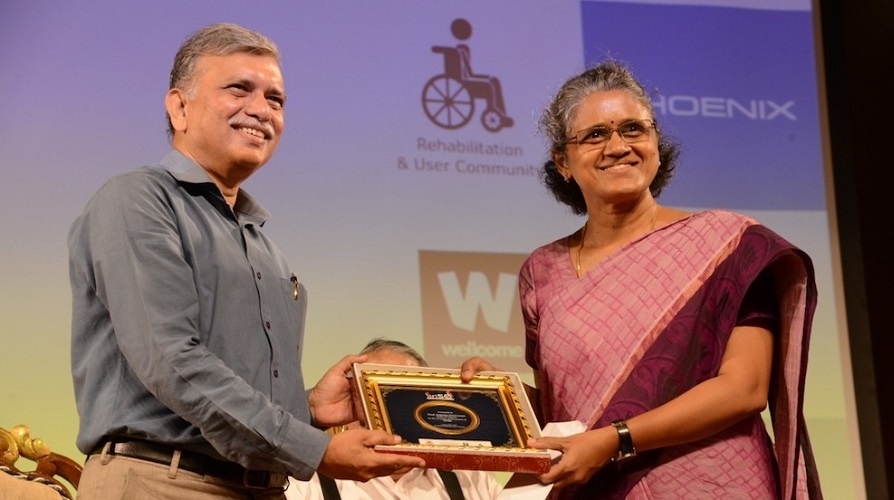 On A Journey To Accomplish Big:

After her graduation in India, Sujatha moved to the U.S.A to pursue her Masters in Biomechanics. Under Prof. Kramer in the University of Toledo, she designed, analysed, and optimised a mechanism for knee disarticulation prostheses. And BOOM! She got patent for the same. She continued to look for jobs in the same field keeping the attractive  IT jobs at bay. Though her field was purely male dominated, she found that, in Ohio, where she started her career, there was no gender bias. She was glad that the foreman on the floor was a woman and there, the work speaks and not the gender. Three years later, she got married and after a brief stay in Singapore that didn't blossom in terms of career, the couple moved back to Ohio, where, Sujatha got more patents. Three years later, she decided to enjoy her motherhood and went in her family way. Later, due to annoying gun culture in the USA, considering children’s' safety, the couple decided to move back to India. Before that, Sujatha decided to get her Doctoral degree and with infants to take care of, she endured all the hardships with the help of her parents, worked almost up to 14 hours a day and finally secured her Ph.D.  The family was then all ready to head towards their mother land. With her three daughters, Sujatha moved back to India.

Former Student Appeared As A Professor:

Sujatha applied to IIT,Madras and she was readily taken on roles as a visiting Assistant Professor. She extended her services in the Department of Mechanical Engineering and laid foundations to the Centre for Rehabilitation Research and Device Development.

ARISE - To Rise From The Chair:

What started as a class project in her Mechanisms class eventually made its way to gift a standing spine to the disabled. The professor worked along with her students to build a standing wheel chair for the specially-abled. The team has also received grant from the Wellcome Trust and TTK Industries. Also, they got access to the wheelchair users through various NGOs and thus performed extensive testing on a real-time basis. Based on the feedback, they developed the design making the chair robust and feasible at the same time. The chair has many safety features included. Care was taken in such a way that the standing mechanism doesn't get automatically activated in a crowded area. Manual operating mechanism was preferred wherein the user can activate using his both hands- slowly and gradually. It also comes with a detachable knee block. The product incorporates various adjustments making it user-customised. This feature enables one time customisation cutting down on individual manufacturing costs, also enabling mass production. Thus, this standing wheelchair is available at an affordable price. It suits the rugged Indian terrain and allows the user to easily travel up to 1-2km on their own. When the disabled are able to stand on their own, isn't that amazing! While nothing has changed or developed in the field of prosthetics over the past 15 years, Sujatha determined to bring about a revolution and she did it. 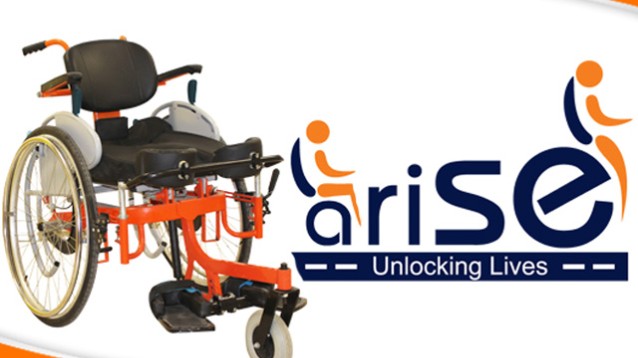 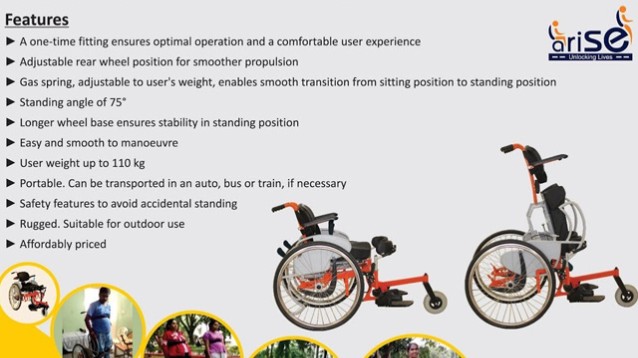 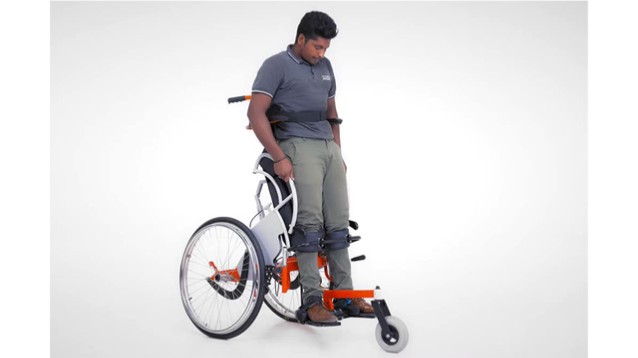 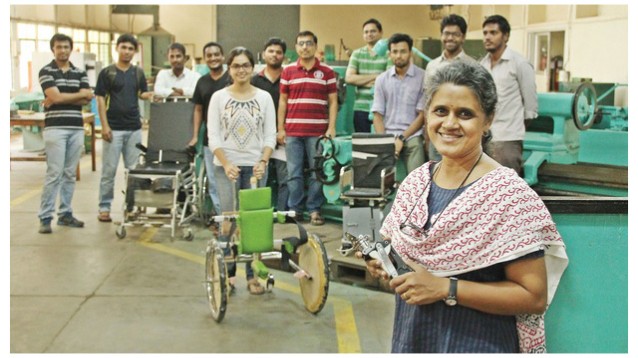 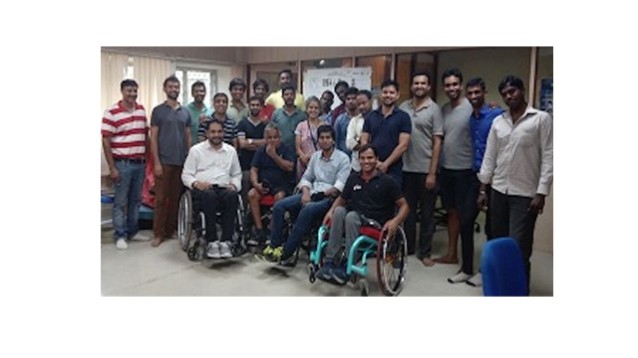 Majority for the Minority:

Sujatha was taken aback by the skewed male to female ratio in her field back when she pursued her engineering. Women always have to strive a bit harder compared to their male counterparts in the chosen field. In a country where even when the woman population was 50%, took decades and even centuries to gain recognition, who talks about the disabled minority? Aren't they overlooked? Aren't their needs not paid heed to? On this note, Sujatha decided to stand by those people with special needs. She says, change happens, not when the minority fight for their rights but when the advantaged majority stand up and speak for the disadvantaged minority.

Here's to the iron lady who set her imprint on every stone she turned into an opportunity. We need more women like this who drive their fellows forward. The ingenious teams that work under such able leaders are sure to create a better world.