Cordycep Militaris have huge medicinal properties. Meet the Man who discovered them.

He learnt about the super mushrooms, researched and has taught farmers to grow and earn a better livelihood. Continuous to research more on other mushrooms.
By: Preetham Bengaluru
Published: 2 Years Ago
Last Modified: 2 Years Ago
Read time: 7 min read
Views  227

Have you heard of these Super Mushrooms that contain so many healthy properties? Yes, It possesses anti-inflammatory, anti-oxidant, anti-ageing, anti-microbial, anti-diabetic and anti-viral properties, they are delicious and medicinally valuable too.  All these medicinal values piqued the curiosity of Dr Sandeep Das, who is a 40-year-old Professor and Dean of Faculty of Science & Technology at the Bodoland University in Assam. He has been actively researching about different kinds of Mushrooms for the past 8 years. When he found about this super mushroom Cordyceps Militaris he got really inquisitive.

When Sandeep joined The Bodoland University in September 2012, his curriculum demanded research on Single-Celled Proteins. Mushrooms were the best example of it. But for the research, there were no seeds of mushroom to grow them in the laboratory.

One fine day, Sandeep and his research scholars were sipping tea in a sweet shop; there they found a fresh set of mushrooms kept in their glass showcase for sale. Since they didn’t have the spawn (seed) for the mushroom, they got really excited and found the farmer who grew this oyster mushroom and got the spawn from him. This is how he got introduced to mushrooms. 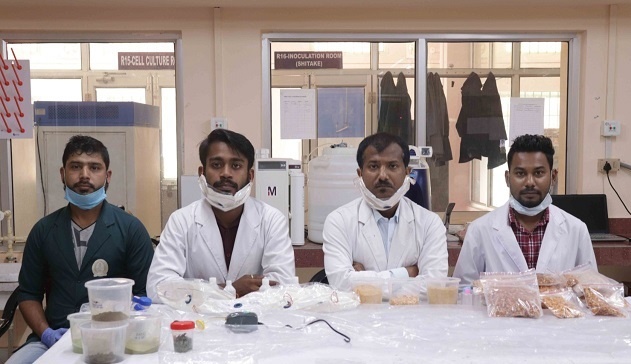 From there on he and his research scholars would go into the densely forested jungles in the North-East, which is very rich in Flora and Fauna. They would venture out there in the Hope of Discovering a new variety of Mushrooms. Basically, mushrooms are fungi, and some fungi are parasitic in nature. As per this, they found mushrooms growing out of dead spiders and caterpillar. The fungi infect the Host, that is the spiders, caterpillars, etc, as these insects live in the undergrounds, after getting infected they make their way top on the ground and succumb to the infection. Now, this fungi grows or sprouts out of the dead bugs into a Mushroom. Cordyceps is one such Parasitic Mushrooms with 400 identifiable subspecies. 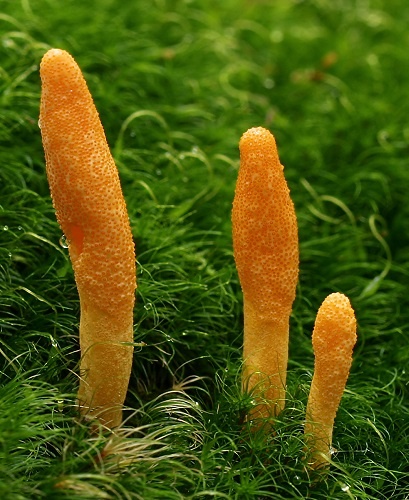 These mushrooms are mostly found in Nepal, China, Japan, Bhutan, and South-East Asian countries like Korea, Thailand, and Vietnam, these mushrooms thrive in humid climates and dense tropical forests. Their value is determined by the level of Cordycepin, a component that helps in the improvement of medical symptoms and conditions. But due to over-collection, the International Union for Conservation of Nature (IUCN) has listed this species in the Red List, as a threatened species. Hence, conservationists suggest growing these mushrooms in a controlled environment to avoid extinction.

Culturing the Cordyceps in Laboratories

As these cordyceps sprout out of dead insects in the wild, Dr.Sandeep decided to grow it on high-quality Brown Rice. A liquid media consisting of the mixture of micro and macronutrients along with the Strain of the Cordyceps mushroom is applied to the brown rice. After this, the rice is kept in an autoclave for sterilization and is placed in a dark area under controlled temperature for about 15 days. After this point, the rice becomes completely white. Then for the next 45 days, the ‘light and dark’ period follows where mushrooms are kept under white fluorescent lights for 12 hours a day. While in the remaining 12 hours, it is kept in a dark place. Slowly the rice’s colour changes into pinkish and the mushroom starts to sprout. Within 60 days of time, cordyceps Mushrooms are ready for harvest. 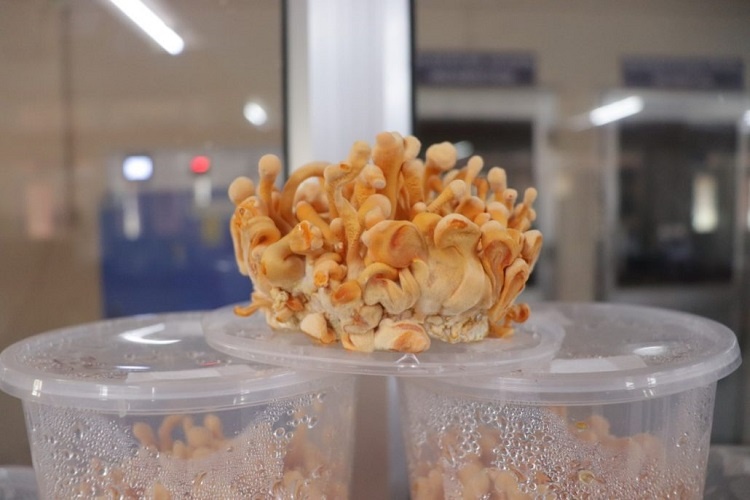 After the harvest, they dehydrate the mushrooms using Freeze-Drying techniques, with the help of the equipment Lyophilizers.

To achieve these results, a clean setup is imperative. HEPA filter was placed to clean the air, needed for growing the mushrooms. This HEPA can filter particles as small as 0.22 microns.

They also have an AC in place of the brand Lloyd ‘Hot and Chill’ AC. The reason for opting this one is it can keep the temperature at 16 to 17 degrees while maintaining the humidity levels at 85 or 90. They also had an air curtain placed at the entry doors outside the room so that every time someone walks into the room, the load of the dirt is filtered.

While Culturing an organism under laboratory conditions, contamination even in a minute level will bring down the whole experiment. But Dr Sandeep did grow these mushrooms very keenly following all the protocols.

They received funding over Rs 6 Crores from state and central government agencies, notably the Department of Biotechnology (DBT), with which they set the research lab and ‘Technology Incubation Centre for Entrepreneurship on Mushroom Culture’ at Bodoland University.

Abu Road-based Raksha Baid contacted them after she read about their work. A nutritionist by training, Raksha decided to start her own business of selling dehydrated fruits and vegetables along with growing Cordyceps Militaris in her labs in Rajasthan. Naturally, she wants to get better at growing them. 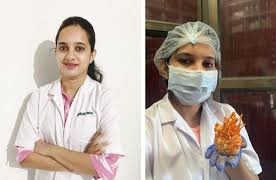 “I was driven to provide a solution through healthy and natural ingredients. I am a vegetarian, and as a nutritionist, I am aware that a lot of vegetarians suffer from vitamin B12 deficiency, which plays a crucial role in the production of red blood cells. Cordyceps Militaris that I grow in my lab has this vitamin in good quantity,” says Raksha Baid. The extra tip what she got from Dr Sandeep is, he told her to grow in them in red, blue and yellow lights, in addition to the white light, and that seems to be working well for her.

Another Hyderabad-based entrepreneur, Atik Patel has been running his venture, Clone Deals Pvt Ltd for the past two years. They boast of the largest lab in India spread over 27,000 sq ft, growing primarily Cordyceps Militaris.

“I decided to call them to understand how they use the freezing technique. Although we do both, their freeze-drying technique is better because the colours, composition, feel, and nutritional properties of the mushrooms remain intact. They gave me some tips with regards to the light, temperature and other aspects,” says the 31-year-old.

While Dr.Sandeep and his team approached DBT-North Eastern Region Biotechnology Programmes with the research proposal, he also had a proposal to skilled individuals in the region while also conducting further research. He has trained close to 3,000 people in growing commercial mushrooms while also discovering new ways of growing valuable ones like Cordyceps. He has done more than what was expected in a short time. One can only imagine what he can achieve in the future, says the manager of DBT Yoginder Singh.

He has also skilled 2,652 farmers, students and other interested folks across the north-east region in growing different sub-species of oyster mushrooms. Cordyceps,  In Kokrajhar itself, they have closely worked with 48 farmers who have been groomed by them and have trained women from 25 self-help groups. They have begun producing spawn (for oyster mushrooms) in-house and are making it available to farmers at Rs 100 per kg, where one kg of spawn can grow 15 kg of mushrooms.

Walking upon their Obstacles

Despite their progress, their journey was not easy. When Dr.Sandeep and team started it was pretty challenging, they read every bit of literature on mushrooms that they could find. But they were only a few people who had been working on developing Cordyceps, their research still isn’t extensive in India. Hence this led them to learn through the old school trial-and-error method, which took time. Also, every element in the set-up was put together by the team. This required a lot of fine-tuning in the process.

Capsules of Cordyceps and Experiments with Food products

They made 150 mg capsules which are approved by FSSAI and ISO, which contain the powered Cordyceps. 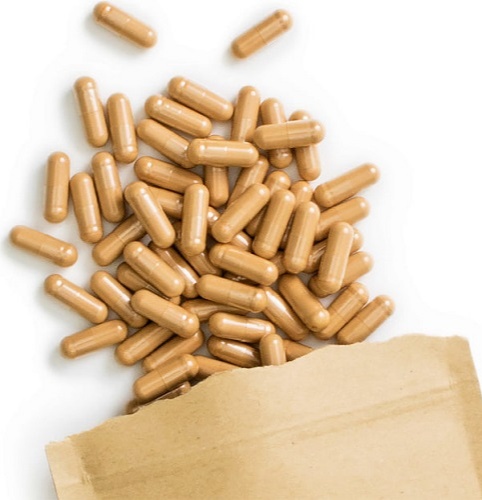 One can consume them as a capsule or empty the powder in a glass of hot water.

They have also been experimenting with food products with different varieties of oyster mushrooms grown in their lab. The food technologist in their team has been using these mushrooms to make soup mixes, biscuits, cakes, papads, and even rasgullas! These are sold in food exhibitions.

Dr.Sandeep hopes that farmers who grow mushrooms can be taught ways of processing their produce, This will encourage entrepreneurship too.

“Our focus as academicians is to not to simply focus on Cordyceps for their high value. We want to discover new mushrooms and research existing ones. For example, a particular mushroom may be poisonous on consumption, but it could act as a remedy for an ailment. There are so many possibilities and a lot more to discover,” says Sandeep