Just five years old and this girl from AP did Limbo Fire Skating. Became the first girl in the world to achieve the feat and set a world record.
By: swetha_vangaveti
Published: 10 Months Ago
Last Modified: 10 Months Ago
Read time: 3 min read
Views  24

Have you watched the German show “Wetten dass”? If you have watched it, you must have seen a Chinese girl driving under a glass plate. Amazed? There are many athletes who perform feats under obstacles. Some skate under the cars while a few skate under horizontal poles. This sport is highly exciting and jaw-dropping and has been gaining prominence across the globe. This is called Limbo skating or roller limbo. In this, the athlete drives on roller skates underneath an obstacle without touching it by splitting their legs apart and leaning the upper body forward with a face almost touching the ground. So, why is that I am talking about Limbo skating now? Well, we have the news of a girl who did this and you will come to know what's so special about it if you read further.

Rishita hails from Tanuku in the West Godavari district of Andhra Pradesh. To tell about her story including her hobbies and interests, she hasn't even seen much of anything in life, not even the school to be frank. She is just five years old. However, she has set a world record already. Rishita was interested in skating ever since she was a toddler. Her parents recognized her flair for the sport and got her enrolled into formal training under an able mentor Lavanya. 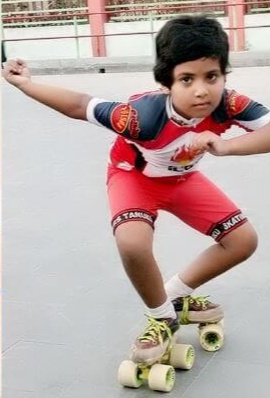 The last week of February 2020, the skating world witnessed something amazing. The skating ring in Tanuku was set up at a height of 8 inches × 20 mts. It was set on fire when a five-year-old girl appeared on the scene. She wore skating shoes and was ready to skate under the obstacle. Wait, What? Yes, a five-year-old girl set on to skate under a horizontal bar placed at as low as 8 inches and that which was blazing in the fire. This outstanding feat that was hosted by Vajra World Records left everyone jaw-dropped. 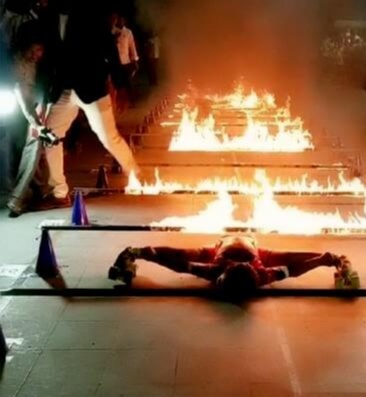 Limbo skating requires the skater to spread themselves parallel to the ground while driving, overcoming the obstacles that are placed at an extremely low height, demands a high amount of flexibility, coordination and strength. On top of everything, Rishita has done Limbo skating under the fire that could throw severe injury even under the slightest imbalance. The CEO of Vajra World Records, Tirupati Rao, mentioned that this was the first time ever in the world that someone as young as 5 years has shown outstanding excellence in Limbo Fire Skating.

He also mentioned that what has just been the boy's sport to date was taken over by a girl for the first time in global history. He also presented the trophy and medal along with the award to Rishita thus giving her place in the World Record for the longest limbo fire skating. The Sports Authority of Andhra Pradesh has mentioned this on their Twitter and wrote, "Rishita, a 5-year-old girl from Tanuku town in the West Godavari district of Andhra Pradesh, set a world record for longest limbo fire skating under the guidance of coach Lavanya.

It feels great to read such stories about child prodigies. The little girl who has already put her state's name on the world map is sure to make it big for the nation in the days to come provided she is given enough encouragement and proper training.