When the Guinness World Records Instagram page shared the video of Stefanie Millinger, it caught our eye. When we saw her amazing feat, we felt like digging deep into who she is and were astounded to see how she literally “folds” her body into almost anything. She turns her body upside down and balances weights on her feet! She plays amazingly with her body, balancing it like no one can ever imagine! You must surely check her Instagram page because words are sort of not enough to talk about her jaw-dropping feats. Let’s get into the acrobatic world of Stefanie Millinger that has even impressed Joseph James Rogan, the American podcast host, UFC colour commentator, comedian, and actor. “One of my favorite people I follow in sheer awe is @stefaniemillinger. Her amazing displays of strength and balance highlight what is possible with the human body given an insane level of dedication and courage. Once every couple of days, I’ll view her videos of her doing handstands on the edge of cliffs with sweaty hands. Check her out, she’s nothing short of incredible!”, he posted on Instagram about Stefanie.

Stifanie Millinger is an Austrian acrobat, contortionist, hand balancer, and extreme sports star. Her father is an undertaker and her mother works for the Austrian telecom with no one else in her family being an acrobat or gymnast. This first-generation acrobat used to dangle from branches or anything up high ever since she was a child. Though she faced opposition from family and relatives for the feats she did, her mother recognized the girl’s passion for acrobats, supported and encouraged her all the way. “When I was a kid, I constantly used to cartwheel my way around the place and dangle from branches, or anything up high”, Stefanie said. She started vaulting at the age of 13 where she practised gymnastic exercises on horseback along with the handstand position. “I liked the position and the range of motion that comes with the handstand and I experimented with it at home”, she said mentioning that she has no idol that she looked up to. “I was just doing it for myself.

I enjoyed the sensation and I gradually increased the number of minutes I could stay balanced on my hands”, she clarified. She made a training plan that improves the core, strength and did stretching exercises. For all this, she would wake up at 4 am every day and practised vaulting before school. To all those who think that her super flexibility came to her by birth, she says that it never did. It all happened out of industry. Ambitious Stefanie trained for 6-10 hours a day for eight long years and that too, without a break. She had never had taken cheat days or exceptions on holidays. All that hypermobility that people see in her today is the result of relentless labour and sweat.

Talking about how clueless she was, when she was asked about her future plans, she said, “During and after school, I was just as clueless as most people about what to do in the future. In my career advice tests, I got 'something with animals', nothing very specific. But you've got to start somewhere. I often played circuses when I was a kid. I'd build a circus ring out of chairs, make popcorn and then do all the acts for my audience – I was an animal, an acrobat and a clown. I took a look at the facts and found something I enjoyed and that I wanted to build on”. This says how whatever she did, was purely based on what she wanted, without thinking of the career prospects. If you do what you love, things will automatically fall into place. Stefanie was repeatedly reminded of how handstand artistry is not a lucrative career choice which she herself knows pretty well. In the initial days, she says, she had to “grin and bear it”. She supported her living by doing multiple jobs like delivering newspapers, handing out flyers etc.

Her Daring Acts That Send Shivers Down The Spine:

This unshrinking woman of power has done numerous jaw-dropping feats like holding her entire body weight with her mouth, balancing on a rooftop, swimming from a bridge, hanging off a cliff with absolutely no safety gear. Millinger says that it is her self-belief that serves as her security gear.

The Rewarding Recognition Did Not Come Without Its Share Of Bitterness:

When people around her said that whatever she was doing will give her nothing in future, when she heard everyone calling her acrobatic displays as something that won’t feed her or give her recognition, she persisted. She didn’t give up but practised harder and harder each day. She kept doing menial jobs to pay the rent while training 6-10 hours every day ignoring what others spoke. “Many family members still say I should learn to do something respectable. My mum is the only one who's supported me from the outset. She's the best – she's always understood how hard I'm working on myself and she's always let me be the person I've wanted to be”, she mentioned.

In January 2019, something that a handstand artist would least expect to happen, happened to her. She broke her scaphoid bone in her right wrist. With a strong mindset, she pushed herself beyond limits and for six months, she did handstand in the relieving posture on her fist without caring for the chronic pain. “At the time, the doctors said I'd never do a handstand again. Only five days later, I was performing again”, she recollected. 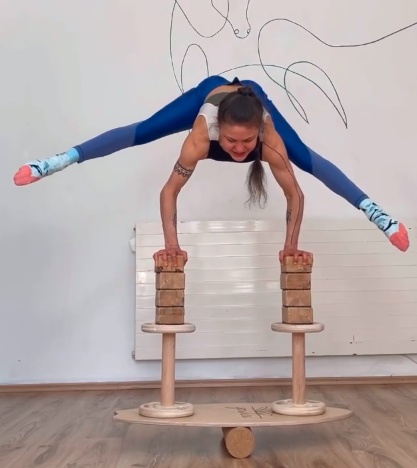 Talking about the criticism she sometimes receives on social media too, she says that she gets effected by negativity for sure, but her strong mindset is what pushes her to go ahead and do what she wants to do. “I would be lying if I said that criticism doesn't affect me. It's hard when people I don't know insult me just because they don't like me or my art. Getting hate on social media is what really unsettles me”, says Stefanie. She says that she derives strength from people who believe in her and support her. Many a time, she also considered deleting her social media accounts but when her Instagram was flooded with more than 500,000 followers and when she received praises from big heads like Joe Rogan, what more, she says, should stop her from displaying her skills? “The very best moments are the ones in which I achieve something really special, though; moments in which I'm fully myself. In those seconds, the only thing that matters is that I've mastered something and that I'm aware of it, regardless of whether or not someone else has seen it”, she mentions.

Recently, Stefanie has set a record for the 'Longest time in an L-sit, 5 min 15 sec by Stefanie Millinger’. The L-sit is a position in which the weight of the entire body rests on the hands. “I trained for that for many years. Guinness World Records kept turning me down, so I decided to film it for myself under regular competition conditions and then upload the video. Then, the Record Holders Republic [an alternative register of exceptional feats] approached me and recognised the record”, she shared. 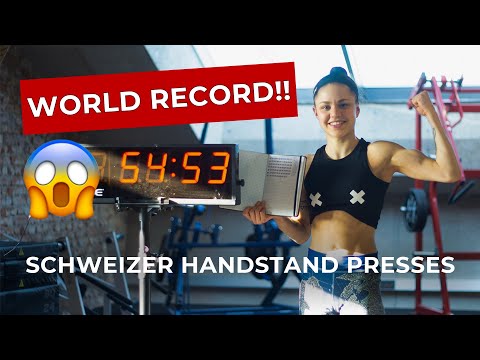 This 29-year-old who is a six-time world record holder was also invited by Cirque du Soleil, the largest modern circus showrunner in the world, to participate a few years earlier. However, as Stifanie sees herself as an artist, she chose to stay away from showbiz. Talking about how her confidence and strength are unbending, she says, “I don't compare myself to others – that only distracts you from the path you want to take, or brings you down. I focus on what I've achieved and what I still want to achieve. If I've put my mind to it, I do everything in my power to achieve it”.

To all those who would like to step into this field that gives huge adrenaline rush, she advises, “Persevere and don't give up, even when things look bad. Give everything and live for the thing you love”.

Kudos to the brave lady who has proven that nothing can stop you from excelling and reaching the pinnacle of success when you do what you love. Let the whole world be against you, if your positive instincts and passion are with you, you will reach there, right where you wanted to. We wish Stefanie the best. 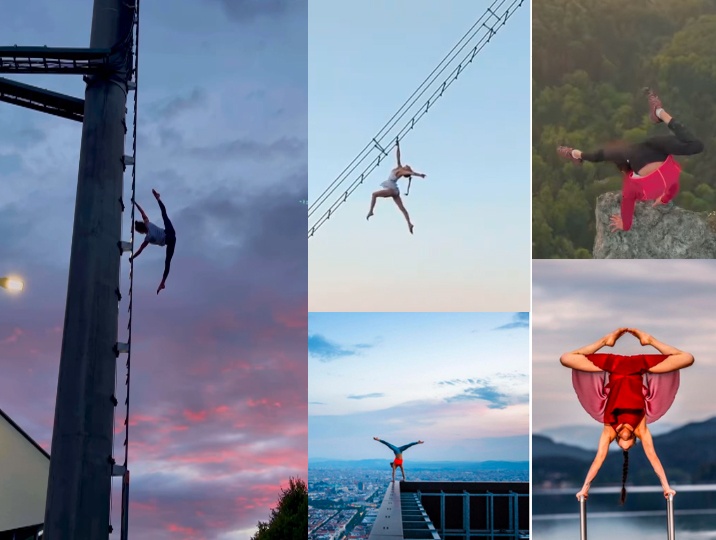