The Kambala challenge runner knows every detail, every strategy, every tactic and especially knows the buffalo. These noble animals are work animals, sensitive to the leader's orders, and to win in Kambala the buffalo must recognize a strong and fast leader. All these characteristics describe the sprinter Nishant Shetty, who broke the speed record imposed by Srinivas Gowda, in the same race. Mr. Shetty achieved an incredible record of 100 meters in 9.51 seconds, which ranks him as the fastest man on the planet. (speed on the track is yet to be seen and proved).

Kambala is an organized annual Buffalo race held in different villages in the south western Indian state of Karnataka and takes place from December right up to April. It began as an entertainment sport but now turned into a competitive one. The farmer with his decorated buffaloes takes on the slushy paddy field and buffaloes are driven by a whip-lashing. It is certainly cruel but villagers strongly believe in this passed-on ritual of thanks giving for protecting their Buffaloes from diseases. 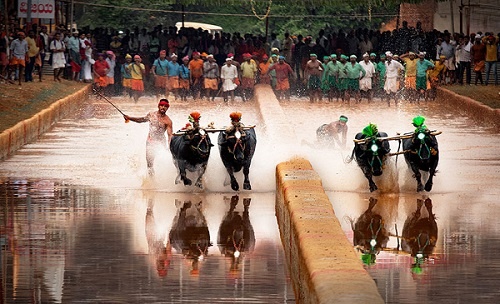 The news went viral and intent discussions followed because it was unbelievable and more so when compared to the fastest man Bolt. Fans were clamoring to declare that the world record for speed was held in India. On the other hand, the national athletics authorities call for caution, because the disciplines, although part of athletics are essentially different.

It could be said that the Kambala race is more demanding than a 100m race on an Olympic track, however, on an Olympic track you run without the momentum of buffaloes, even though the wetlands of the rice paddies represent an obstacle that the Olympic track runner does not face. So how do you compare, and why do you compare? So far it is very difficult to compare because the factors involved are innumerable. But why? That one is worth answering.

The fact that in India the existence of sprinters like Shetty and Gowda is discovered, shows the existence of athletes with innate abilities that qualify them to train and participate in international athletic events, beating world and Olympic records.

The impact caused by Gowda on social networks in mid-February 2020, made the whole world look towards the competition in Kambala. The exclamations of fraud and success were mixed in the world of athletics. The most sensible call for the evaluation of the Kambala sprinters. However, the achievement of Mr. Nishant Shetty and his 9.51 seconds, constitute the replication of the successful speeding experience that Mr. Gowda had had a week before.

Shetty comes from Bajagoli Jogibettu, and his extraordinary participation in the Kambala race placed him among the select group of sprinters who registered marks below 9.57 seconds. These sprinters include Iruvathur Anand (9.57 seconds), Akkeri Suresh Shetty (9.57 seconds), Srinivas Gowda (9.55 seconds) and Nishant Shetty (9.51 seconds). All of them are athletes who place a national sport discipline on the world athletics scene, as it is a highly demanding competition where sport, culture, traditions and above all speed converge.

February 18, 2020, will be etched in the memory of Mr. Shetty and the state of  Karnataka because long before the authorities recovered from the impact caused by the viral video of Mr. Srinivas Gowda's race breaking the world record for the 100 meters in athletics; a faster runner celebrates the breaking of the 100 meters record with a stunning finish of 9.51 seconds. All that remains to be said is Shetty’s happy record!

Mr. Shetty runs leading the buffaloes owned by Hosabettu Gopalakrishna Bhat. This sprinter as well as his counterparts Kotian, Gowda, Atith Shetty, Panne Nasir, and Manjunath Bhandary, were trained at the Kambala Academy. This academy trains a very special type of sprinters who face challenges that are out of the ordinary for a speed athlete.

These men need to develop resilience and a sense of geospatial location that allows them to react in a matter of milliseconds to changes that animals may experience. The conditions of the wetland require the sprinter's legs to be agile to withstand the irregularities of the terrain and his lung condition must be superior to that of ordinary men because a single irregularity in breathing would alter the results measured by milliseconds.

Mr. Shetty's feat is beginning to show. These contingents of Kambala sprinters exceeded local expectations and the authorities must hurry to catch up with them before the sprinters surprise them by reducing the 100-meter record to less than nine seconds. 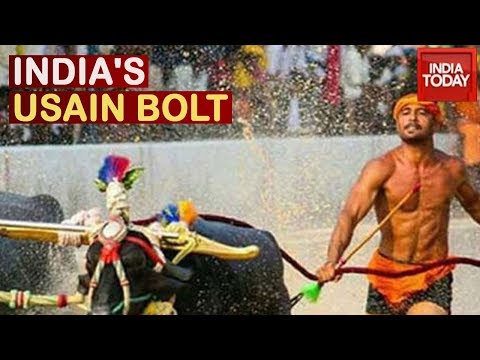