Athletics is one of the most exciting and ancient sports. The Greeks, over two thousand years ago when they celebrated the Olympics, concentrated on athletic events and that is where the name comes from, from the Greek word "athlete" and the word "alethos" referring to effort. The athlete is an extraordinary human being who dedicates himself with great effort to participate in track and field competitions in order to achieve victory. The athlete competes against time; his tool is speed.

Srinivas Gowda is a man from Karnataka who achieved a time of 9.55 seconds in a rugged 100m race during an indigenous event where he ran with his two buffaloes. Mr. Gowda was recorded during the race and the video was uploaded to the internet causing a stir around the world.

Mr. Gowda is an athlete who has come out of the woodwork. He trains and looks after his buffaloes and, in addition, is also a construction worker in Moodabidri. Construction work is a very demanding job, which requires strength and skill, both of which are essential in an athlete. He practices yoga for a calm and cool mind which is so very important.

The sport of buffalo racing is very popular in Karnataka, but it requires not only speed from the runner but also focus on driving the buffalo during the course over a rice field. This Kambala buffalo race is an annual event where the owner/farmer runs with a pair of buffaloes a distance of 145 meters. Amazed at the speed of this young man, a video was quickly taken and circulated in the media which went viral primarily because of the industrialist Anand Mahindra’s tweet.

Just one look at his physique & you know this man is capable of extraordinary athletic feats. Now either @KirenRijiju provides him training as a 100m sprinter or we get Kambala to become an Olympic event. Either way, we want a gold medal for Srinivasa! �� https://t.co/H3SBiOVSKr

Kiren Rijiju the current Minister of State of Youth Affairs and Sports was quick to notice the tweet and has made concerted efforts to contact this overnight star. The pressure from the fans was so strong that the Minister of Sports promised that the Sports Authority of India (SAI) would make an assessment of Mr. Gowda. Athletic lovers in India feel that Mr. Gowda is a hope for the nation that could bring great triumphs to the country if given the opportunity.

Comparing Gowda to the fastest man Bolt is a bit daring. Running on an Olympic track is not comparable to a race in the wetlands at Kambala, where the speed of the buffalo forces the runner to use his heels to advance and maintain balance. In the Olympic track, the toes are the protagonists as the front part of the foot is the one that gives the impulse.

However, these strategic reflections that differentiate the two types of running do not affect the appreciation of the enthusiastic fans who clamor for Mr. Gowda's participation in an international event. 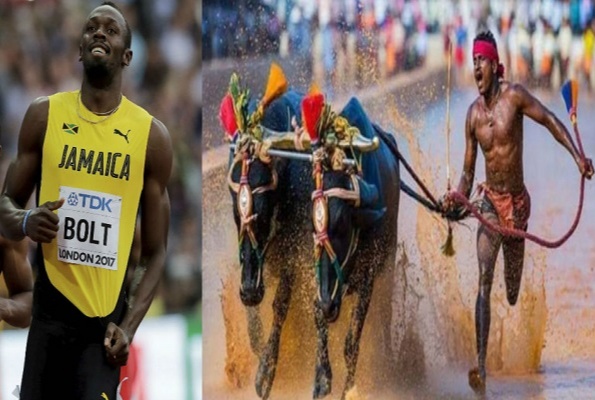 What is truly impressive about Mr. Gowda's feat is that his achievement gave visibility to thousands of Indian athletes who remain anonymous. We hope to identify and cultivate more talent with the input of all the sports enthusiasts.

Irrespective of the results of the SAI tests, the Karnataka event showed that the nation's sports authorities must widen their search for great athletes, who are in the spotlight of rural villagers but invisible to national and international sports circuits.

The truth of this story of achievement is that Mr. Gowda is the fastest rider in the history of Kambala's competition with a record of 13.62 seconds in the 145-meter course in the region's most prestigious buffalo race.

Mr. Srinivas Gowda is a hope for athletes from all corners of India who are waiting for an opportunity to showcase their talents and bring glory to their country.