International Surfer/SUP Queen (Stand up Paddler) gears up for 2024 Olympics.

First woman surfer and a Standup Paddler just returned to home waters bagging the Third Place at the recently concluded 2017 -West Marine Cup. She is now made a mark at the International circles and is eyeing for a medal at the 2024 Olympics.  One may think that it is a long-term goal, but that is how Tanvi wants it to be and has started preparing mentally and physically to achieve her goal.  She has been in the limelight for a couple of years now and has more than 5 Wins in the Stand Up Paddling event at the nationals.  She is also the winner of  " SUP Grom of the year 2017"  award. 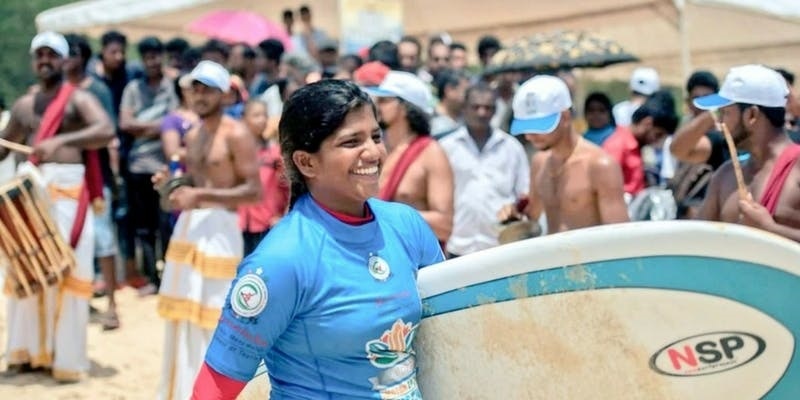 Growing up in the Coastal Area.

What more can one ask for? Being born and grew up near the coast was the best thing that could have happened for this young only Indian Surfer and Stand-Up Paddler (SUP). Competition for women surfers probably wasn’t even heard of; leave alone being considered as a sport in India. She spends most of her time in the sea and calls it her second home.

Paddling on the shores.

Even as a little girl she followed her brother to the seas swimming and paddling. Her Mom was concerned about her safety in the deep blue dangerous waters; as she was the only girl to venture out.  Anyways, this bold kid would still tag along with her brother without her Mom’s knowledge. Within no time she was comfortably navigating through the rough waves and then her Mom calms down and started encouraging her instead.

All this was put to rest when Tanvi happened to meet up with a girl from the US who had come to spend a few months on the peaceful waters of Mulki.  She said if the westerners can do it why not she and this is how her Mom was convinced and she says that was the most thrilling moment for her.  She not only has made her Mom and her family proud but also the country and has paved the way for the other young aspiring girls.

A path to professional Paddling.

She was already into water sport as young as 8, but now had to graduate to a professional level. This is when her grandfather introduced her to the Mantra Surf Club in Mulki, Mangaluru when she was 14. The club was aware of her talent and was delighted to train her and they surely have done a super job to churn out a new Champ.  Winning competitions and bringing laurels became a habit.  She is fondly referred to as a SUP Queen (Stand-Up Paddler). The rest is history.

She enjoys sharing her skills and trains a lot of young boys and girls and also the students from Surathkal and in the process learns a lot of training skills.

She has definitely changed the way water sports is perceived and many have already following her footsteps. Much needs to be done in the form of support and facilities from the Government and hopes for the best.

Bookofachievers.com Congratulates you and hopes to see you back with a Medal from the Olympics in 2024.