The captain of Indian Senior Women's Football Team aims to qualify for the Olympics.

Loitongbam Ashalata Devi makes her way as an Indian captain for the Women's Football Team and leads the team for the 2020 Qualifiers round 2.
By: Andrea Johnson Bengaluru
Published: 1 Years Ago
Last Modified: 1 Years Ago
Read time: 3 min read
Views  85

A start of a New Era:

“Our greatest weakness lies in giving up. The most certain way to succeed is always to try just one more time.”— Thomas A. Edison

Loitongbam Ashalata Devi, a 27-year-old woman born on July 3rd, 1993 who is currently an Indian professional football player. She plays for the Indian national team and women’s league club Sethu FC. She has also marked her position as the captain of the senior Indian women’s team. She plays as a central defender on the field. Lauding Ashalata's accomplishment, Head coach Maymol Rocky said,” She really deserves this and it is a testament to the hard work put in by her over the years. I am really happy for her and for the whole team as well, who have been highlighted at the continental level with this nomination.”

Her journey and career:

Ashalata Devi started her career in 2011 as an 18-year old. She is certain that this level of displays will create excitement for women's football back home. She feels like this is a dream come true as her hard work has paid off. She was additionally under the mentorship of Oinam Bembem Devi and has made some amazing progress with her direction. She made history by turning into the first-historic women football chief to lead India past the first round of Olympic qualifiers. She signed the Maldives premier league club New radiant in the year 2015. She won the league with the club in that particular season. She was the only second Indian woman to play for a foreign club. She also played an inaugural season of Indian women's league with the rising students club. For the next season 2017-2018, she moved to Manipur club KRYPSHA F.C. 2018-2019 Indian women's league season she joined the Sethu F.C.

Loitongbam Ashalata Devi was nominated for the Asian Football confederation in the year 2019 for player of the year (women) Award. Li Ying of china and Saki Kumagai of Japan were the other two nominated names. She played a crucial role by helping her group win the 2019 south Asian football federation championship. She additionally drove her group into the Olympic 2020 qualifiers Round 2. She wishes to spread more enthusiasm for ladies' football the nation over. Ashalata Devi unassumingly expresses gratitude towards her mentor Maymol Rocky and Chaoba Devi who helped her and guided her. She is additionally thankful to have such stunning and rousing partners, and she is respected to lead them as a skipper. 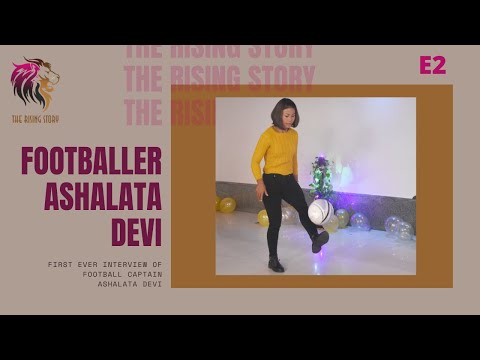 Women experience difficulties to seek after their fantasies. Not many are lucky though they are capable to get into professional sports. A quote stated by Anand Dalta (Head of sports Tata trusts) “One of the major challenges for women in India remains the burden of cultural baggage that acts as a hurdle for development. Despite some changes in this millennium, there is still some distance to go before women in India are afforded fair opportunities for a career in international sport.” Few of the successful football players like Oinam Bembem Devi, Loitongbam Ashalata Devi, and Bala Devi have had their own battles and deterrents to face yet they have outshone their talent and ability.

Some of the major challenges women athletes can go through:

1. Menstruation as it brings in a lot of side effects like dizziness, pain depression, and so on but yet women athletes fight all this and continue practising to accomplish their dreams.

2. Some get driven into early marriage because of family pressures.

3. Another major challenge is job security which makes it hard for them to support their families.