Saudi-American woman cleared the path for other women to the Olympics.

Standing ovation to the one who didn't win the Olympic marathon. Saudi-American marathon runner is the first to represent Saudi Arabia in Olympic games.
By: swetha_vangaveti
Published: 2 Years Ago
Last Modified: 2 Years Ago
Read time: 5 min read
Views  37

She didn't qualify for the Olympics but she participated twice. She didn't win the race but she received a standing ovation. Sounds strange, right? She is Sarah al-Attar, a Saudi-American who hit the news for her participation in the 2012 and 2016 Olympics. While there are so many athletes, why did Sarah become the talk of the world? Well, read this story and you will know why she is so special.

Sarah Attar is a track and field athlete born on 27th August 1992. She was born in Escondido, California. Her mother Judy hails from California while her father Amer was born in Saudi Arabia. He pursued his college education in the United States and then married Judy in 1984. Thus Sarah has dual citizenship and became a Saudi-American. In 2010, she graduated from Escondido High School and went to Pepperdine University, a Christian university in Los Angeles County, California, near Malibu, to secure her B.A in studio arts with the Rex Hamilton Memorial Art Scholarship she won. Post her graduation from Pepperdine, Sarah went on to become a landscape photographer in 2014. She later moved to Mammoth Lakes, California, in 2015 to dedicate her complete-time training with distance runners like Olympian Deena Kastor who is the wife of her coach Andrew Kastor. Though she has lived all her life in the United States and never spoke Arabic, she visits her relatives back in Saudi every year.

When Attar was in school, she represented her school in the cross country running. In March 2012, she participated in two college meets representing Pepperdine and finished 12th in a 1,500-meter heat in the Cal State Fullerton Ben Brown Invitational and 29th in the 3,000 meters in the Spring Break Invitational. While she was studying in Pepperdine, she was selected along with Roxanne Barker to compete at the 2012 Summer Olympics.

Olympic Run - A Big Task For Sure:

In the 2012 Summer Olympics, Attar was selected to compete for Saudi Arabia. The other woman to represent Saudi was Judoka Wojdan Shaherkani. However, before June 2012, the Saudi Arabian Olympic Committee banned their kingdom's females from participating in the Olympics. On this note, the International Olympic Committee (IOC) threatened to ban Saudi Arabia from the Olympic Games if they wouldn't allow their women to participate in the Olympics. IOC also made it okay for the female contenders from Saudi to not to meet the Olympic qualifying standards. With this, Attar entered into the Olympic ground. During the "Parade of Nations", the opening ceremonies, Attar and Shaherkani, the only two females representing Saudi Arabia were made to walk behind the country's male delegates. Even the dress code for Attar to participate in the Olympics was also decided by Saudi Arabia. She had to wear the outfits that went along with Islamic law. Earlier, a few photographs of Attar wearing tank tops and shorts with no head-covering were deleted from all the sites on the internet including the cross country website. So, this time, Attar and her mother Judy designed a dress for her that comes with long sleeves and long pants covering her head and neck too. 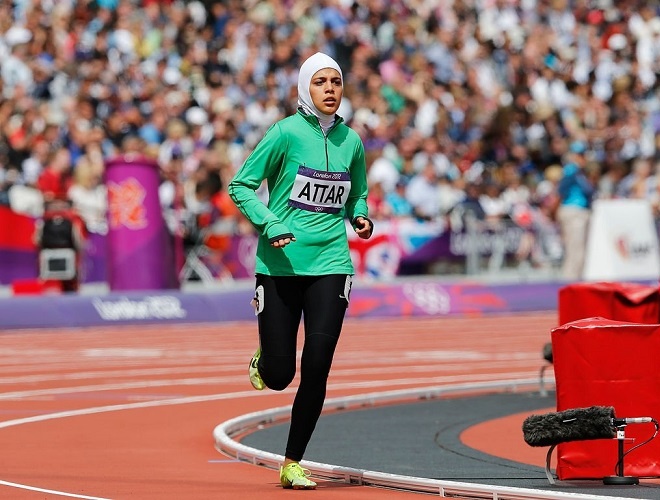 I was proud to wear the uniform and liked that wearing the appropriate dress connected me to Saudi girls who want to run and have to be covered while they do it, she said.

On the Olympic land, Attar competed in the women's 800 metres. This distance, she had competed only once when she was in high school but never again. "The 800 was a good option because I wouldn’t be out there getting lapped in the 5,000 or something", she said.

In the Heat 6 of the women's 800m qualifying heats on August 8, 2012, Attar finished last, with a time of 2:44.95, much behind Janeth Jepkosgei's 2:01.04. She was more than half a minute slower and 150mts behind her competitor. However, the spectators stood up and applauded as Attar crossed the finish line. The whole area vibrated with claps and cheers for the will of this Saudi Arabian woman to participate in the Olympics, kicking off the constraints. This moment of hers was written in just one Saudi Arabian newspaper that later met with criticism.

In 2016 Olympics, Attar again competed for Saudi Arabia as a wild card entry where she didn’t have to meet the standard Olympic qualifying time. Again, the Saudi Arabian Olympic Committee had not mentioned the name of her or the other women who would represent the Kingdom in their website. 23-year-old, Attar took part on the gruelling 42-kilometre marathon race. Well, the best part here was that the count of a number of Saudi women participants rose from 2 in 2012 to 4 in 2016. None of them qualified directly for the Olympics but had taken part with special invitations from the IOC. This time as well, like in the 2012 Olympics, Attar ran fully covered; wearing long sleeves and long pants but wore a baseball cap instead of a Hijab. She finished the run in 132nd place out of 133 women in 3:16:11 that was 52 minutes behind the Kenyan winner Jemima Sumgong.

The Beginning of A Change:

Since the London games, some change was being noticed in Saudi Arabia and Attar also confirmed the same. Amer Attar says that he gave his daughter a boyish cap and warm-up pants in 2011 when his daughter wanted to run for the country in the Olympics. He also saw men and women running together in Jeddah.

“I even saw a guy, I think, looked like his wife, and they were holding hands and running together. And she was wearing the Abaya, and she was covered up, but they were actually running,” said Amer Attar as mentioned in Hindustan Times.

A Winner For Sure:

Though Attar didn't meet the Olympic qualifying standards, though she hasn't won the marathon in the field, she kept showing her consistent improvement in every marathon. Moreover, the core of the matter lies not in winning or losing, but it's all about the "participation of Saudi women" in the Olympics.

If the marathon teaches you anything it’s patience. I will continue to patiently work towards my goal of hitting that qualifying mark. It is an honour to share this process with you, represent Saudi Arabia, and run the Olympic Marathon with the best in the world, says Attar.

Thanks to the young pioneer who showed the way to other women and filling in them, a sense of competitive spirit and a desire to accomplish big. 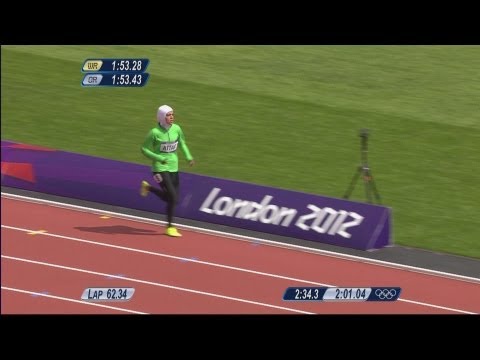