Chinki Yadav makes it to the Tokyo Olympics in the 25-meter women's pistol discipline.

Chinki Yadav makes it to the Tokyo Olympics in the 25-meter women's pistol discipline after Winning 588 score at the Doha Asian Championships
By: milagro_vina
Published: 2 Years Ago
Last Modified: 2 Years Ago
Read time: 4 min read
Views  150

The quota of Indian sportsmen who will represent the nation in the 2020 Olympics continues to grow and women continue as the protagonists. Chinki Yadav qualified to participate in the Summer Olympics in Tokyo in the discipline of 25-meter pistol shooting. Miss Chinki's participation in the youth shooting championship in Schule, Germany, was instrumental in the Indian team's accumulation of 1711 points and winning the bronze medal.

Chinki’s extraordinary 588 score at the Doha Asian Championships secured the spot for the Olympics. The young Chinki and her extraordinary marksmanship, promises brilliant Olympic participation.

The simplicity of an extraordinary athlete

Chinki Yadav hails from Bhopal was born on 26 November 1997. Her family is humble people that lived for a long time in a single bedroom on the premises of Tatya Tope Nagar Sports Complex.

Chinki’s father Mehtab Singh Yadav is an electrician at the sports complex and that was the reason they moved and lived here. "As my house is inside the stadium, my daughter used to watch others play different games. She wanted to join the summer camp. I didn't know that decision was to make a star in my family," her father proudly said.

A constant visit to the sports complex facilities with her father sparked Chinki's interest in sports life, and she began her training at the Madhya Pradesh Shooting Academy under the guidance of Jaspal Rana. Her coach knew that little Chinki had a promising future in the shooting discipline, so every day he increased the demands on the young shooter to develop her full potential: "She was among the few shooters selected after the talent hunt for the shooting academy. She later participated in the national championship and won the medal," 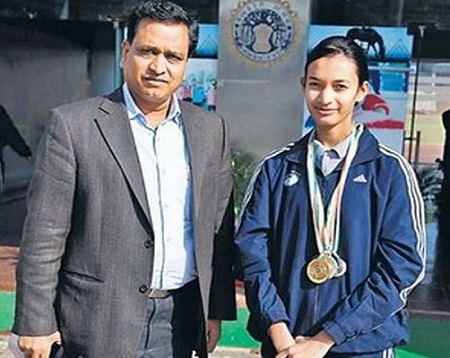 Choti Chinki's sporting qualities led her to be part of the select group of shooters who were trained by Indian shooting Coach Ved Prakash: "With her training in gymnastics, she had a flexible body and did not have much trouble adapting to the requirements of pistol shooting," Prakash recalls. He used to spend extra hours training and watching other shooters practice. And because she's introverted and wasn’t distracted it was much easier him to train her.

Trajectory to the Olympics

The young promise of pistol shooting began her participation in international circuits very early. In 2015, she won the bronze medal at the 2015 Asian Shooting Championships in Kuwait City with a score of 570. The following year, she won the bronze medal in the 25-meter women's junior pistol event at the 2016 ISSF Junior World Cup. She also won bronze medals in two other international competitions in the 25-meter pistol event in Gabala and Suhl.

The medal sequence continued in 2017 when she won the bronze medal at the 2017 ISSF World Junior Championships in Suhl in the team event, along with Muskan and Gauri Sheoran. The year 2019 was a year of triumphs for Miss Chinki Yadav, who took second place in the qualifying round of the 2019 Asian Shooting Championships, scoring 588 points to advance to the final.

"I have never dreamed of seeing my daughter playing for the country. I have no words to describe her achievement in winning the bronze medal for the country," said Mehtab, moved by his daughter's performance at international events.

Recognition and opportunities for all

The achievements of India's sportsmen and women are the achievements of the entire country, which is why Sports Minister Yashodhara Raje Scindia said: "This is what our players are doing for the country. She is a star in our shooting academy. However, the costs of training and equipment are so expensive that poor athletes do not have many options to practice the sport of shooting: "Shooting is such an expensive game that I could not afford to buy weapons and ammunition out of my own pocket. My family owes a lot to the sports department” she said.

Miss Chinki's achievements in the international shooting championships paved the way for other poor athletes to find support from the authorities. Minister of Sports Ms. Scindia said it was time to take care of these athletes in a comprehensive manner: "I have arranged for a leading nutritionist for the players at the academy. There will be psychologists and others for the general development of the players. Players like Miss Chinki have shown that there is no shortage of talent and we will continue to support them," she said. 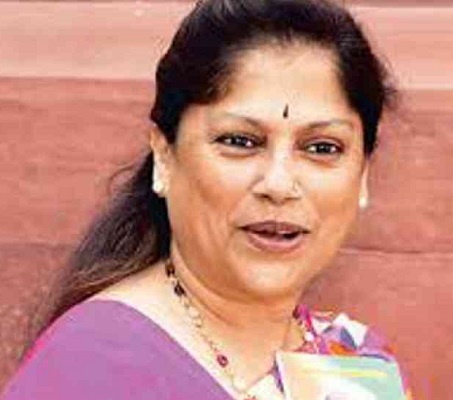 Miss Chinki grew up in a poor family but with a hardworking father. Her father taught her to strive for great things in life. With sacrifices and efforts, she managed to reach the status of an Olympic athlete, but she has also obtained the support of a financial institution that gave her a job and allows her to work from home so as not to interrupt her training.

At 21, Miss Chinki works as an assistant manager in a bank under special conditions so that her sports career is not affected: "A monthly stipend was enough to solve all her financial problems. We made sure she didn't have to go to the bank every day. An arrangement was made for her to work from home," said Ms. Scindia.

Next summer the whole of India will be following Chinki's performance at the Olympics and for many years she will bring glory to Indian sport.