She made plans for future lying on the hospital bed. "I will make a difference if I survive", she thought. Today she is a doctor and an inspiration to many.
By: swetha_vangaveti
Published: 1 Years Ago
Last Modified: 1 Years Ago
Read time: 5 min read
Views  116

When Ayesha Aijaz was diagnosed with Non-Hodgkins Lymphoma, a type of blood cancer, which attacks the white blood cells, she was 14 - the time when she was just finishing her 7th grade. With severe cold and cough that only got bad with days, Ayesha spent sleepless nights a week before her seventh grade final exam. The moment she would lie down, her cough would intensify keeping her awake all through. "I remember going to a doctor early in the morning before my school on the day of my first paper", she recollected. The doctor, who didn't expect it to be anything serious, just asked her to get a Chest X-Ray done. But the very next moment he observed it, he and Ayesha's mother who is also a doctor understood that there's something wrong. "Although you can’t really diagnose cancer from an X-ray she knew something was wrong with me. In order not to scare me she just asked me to go give my exam and said it’s all okay. But I knew something was wrong", Ayesha recounted the morning. When Ayesha came out after exam, her doubts about her health went strong when she saw her otherwise busy parents and uncle coming to pick her up. She was taken to Skims Soura where a CT scan was done and the doctor said it could be Lymphoma. The little girl was scared and dialled her uncle, who is also a doctor, up and said that she doesn't want to get treated at Skims Soura. "So he talked to my mother and the very next day we were in Delhi", shared Ayesha.

Encounter With The Truth:

Ayesha was taken to the Rajiv Gandhi Cancer Institute in New Delhi where the pediatrician who is supposed to check upon Ayesha was not available as she had gone to USA on a conference. So, Ayesha met a senior doctor who treats adults. He tried to make everything seem normal for Ayesha while preparing her for the stages to follow. "He called me “princess”. I remember him telling me that you’re going to lose all your hair. For a seventh grade girl to hear she will loose all her hair was a shock. I remember running away from his cabin and crying in the hall way. The old people sitting there who had also lost their hair came up to me said, “trust us dont worry it grows back, and even if it doesnt you can wear a wig, we also have wigs at home”. They were all trying their best to support me and be there for me", Ayesha narrated her first learning about the disease. Ayesha was in the age where terms like life and death are confusing but she was sceptical about what's in store for her. Narrating her fears she said, "I did not know how bad chemotherapy would be, later sometimes I used to feel it is worse than cancer itself". 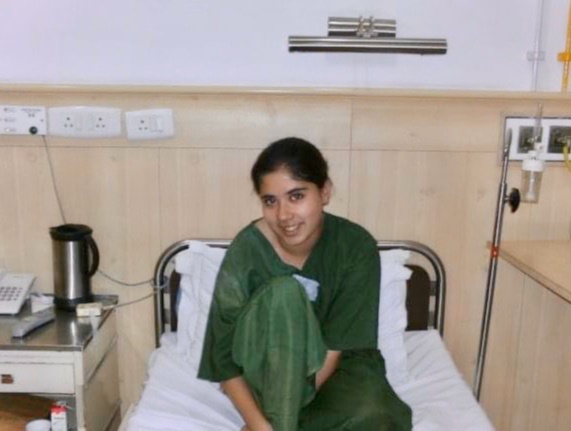 Taking The Journey Ahead:

Ayesha was admitted in the pediatric ward and she was amidst the sick children as young as just one month old. "I saw one kid die in front of me which devastated me. I was like where is Allah, how can he put such small children through such pain and misery", she recollected her thoughts. She faced the treatment sometimes with confidence while sometimes she felt low. She faced many side effects of the treatment like intense stomach pain sometimes, thorwing up almost everything she ate or drank at times, and many more. Her mother who was about to deliver her second baby was admitted to a different hospital. "I don’t know either for a change or to make me eat something or to cheer me up, my doctor suggested to go and meet my mother. It was at this point I thought that I might be dying that is why they are asking me to go and meet my mother".

So much of physical and mental turmoil that the little girl went through all her years of treatment and she recounts how friends and family stood by her during the tough phase.

"I have this friend who literally made sure to call me every single day. I love watching cricket, and she would watch the entire match even if it was a test match with me on phone. She would keep me updated literally about everything that was going around so that I wouldn’t feel like I’m missing out".

Plans For The Future From The Hospital Bed:

During the period of eight months that she spent in the hospital, Ayesha realised that she should make her mark in this world so that she won't be forgotten. Life became much more than marks, money and temporary luxuries. "It was there that I promised myself to find the cure of cancer if I made it through (or at least die trying)", she said. The teenager made a plan for herself after doing a bit of research. She decided to do MBBS and then wished to do research in the US. Then take up Residency in Internal Medicine and fellowship in Medical Oncology pursuing a PhD in Oncogenetics. She didn't just sit making plans. When she was out of the hospital, though she had to strive hard to take immense care of her physical and mental health, while going through severe side effects of trearment, she made sure that her five-stage plan comes into action. Today, this 24-year old daughter of an engineer father and a doctor mother from Srinagar, finished her MBBS and is currently in her internship period. Her research was also approved by ICMR. She has done multiple workshops and has also done observership in Kashmir.

"Fast forward to twelve years later, with honours in all exams I’ve nearly finished the first step of my long journey. Alhamdulilah. But I still take it one day at a time, the way 14-year-old Ayesha in the hospital taught me to", she says.

The Words Of Wisdom From The Warrior:

To all those who are suffering from life-threatening diseases like cancer, Ayesha advises them to take it one day at a time.

"Don’t think too much about it, accept you are sick, and trust that you will get better"

She further says, "If you are going to survive it then you have to give purpose to your life. You have to do something to make life better and easier for others and for that you have to find a purpose in life, else there is no point in your second life".

Clap for Ayesha who has shown how to 'survive' and set an identity. She proved how one can be grateful enough when life gives second chances. You are an inspiration girl!