Sustainable fashion is her mission - Meet the founder of the fashion brand Otsü.

TV commercials, magazine features - Axone actress is an amazing fashion designer who is turning fashion to be ethical and sustainable through her brand Otsü.
By: swetha_vangaveti
Published: 1 Years Ago
Last Modified: 1 Years Ago
Read time: 5 min read
Views  25

Fashion industry has been facing too many pitfalls that have been decelerating its growth over a period of time. With respect to the industry that is often portrayed to be as colourful as a rainbow on its exterior, there are floating dark clouds in the inside. Right from the point of procuring the raw material to the end marketing scenario, there are innumerable drawbacks causing personal and environmental degradation. Mass production, sweatshops, wastage, toxic clothing, lack of authenticity, physical and mental abuse towards the people involved in every phase of textile production are just a few out of a massive bunch of pitfalls. While the world organizations are warning the nations about the dire need to going green on one side, the toxicity involved in every phase of the fashion industry is scaring.

The Creator of A Sustainable Fashion Brand:

Asenla Jamir who is basically from Nagaland saw her childhood bloom in Assam. She has taken upon her shoulders, the responsibility of spreading the green message in the world of fashion. When she witnessed the serious global consequences that resulted from the inhuman activities, she resolved to switch to sustainable living. Though comprehensive sustainable living is not possible, she feels that one can extend one's contribution in reducing the carbon footprint. So, she herself chose to start her journey towards green fashion and wanted to advocate its benefits through actions rather than words. After having noticed the amount of pollution caused by the fast fashion companies in the form of carbon emissions, fabric wastage, and disposable methods, she initiated a project that's environmentally friendly, sustainable, and ethical. In order to put an end to the fast fashion and its adverse consequences, she founded a sustainable fashion brand, Otsü, and is the founder and creative director of Otsü Clothing Co. 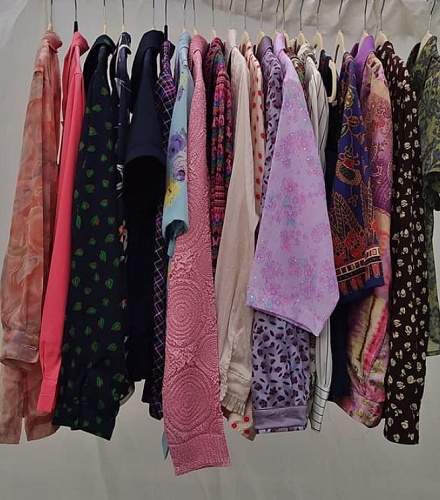 Otsü - A Gateway to Sustainable Fashion:

How is Otsü different from the other fast fashion brands? Though there are highly-sold and immensely popular fashion brands, the ones like Otsü are quite rare. This is because Otsü is a completely sustainable fashion brand that draws material required for its designing from the environmentally friendly sources like the Naga textiles and the rescued fabrics. Otsü textiles come with "season-less" policy and "one-piece item only" type of textiles. That means mass production is greatly controlled checking the carbon emissions and keeping the pollution under control. Not only does the controlled mass production reduce environmental wastage, but it also indirectly benefits the workers' overall physical and mental being. That means, in the whole process starting from the procurement of raw material to the end marketing, no creature or nature is harmed. Even the disposal techniques are borne in mind as disposing can be achieved either by recycling or re-modelling. Also, as the material is eco-friendly, the earth can take it in a healthy way when disposed of. Thus, Jamir encourages consumers to buy thrifty items paying attention to the origin and sustainability factors of the material while making a purchase. Though fast fashion clothing is comparatively cheaper, a sustainable fashion brand like Otsü does a million times more good to the producer, consumer and nature.

How Has It All Seeded?

Jamir was drawn towards the world of fashion ever since she was a teenager. Her mother and her vintage collection also had a huge impact on Jamir's inclination for fashion. She got more acquainted with fashion and trends through music, magazines and later, the internet. But it was in her graduation that she was fuelled by the thought of sustainable fashion or fashion with a cause. Jamir has gone to Nagaland and conducted research on the Konyak and Chakhesang tribes as a part of her graduation project. She closely observed their lifestyle, food habits, clothing sense and also learnt about their origin and culture. She, who basically belongs to Nagaland spent most of her life in Assam. But when she exposed herself to the lives of people in Nagaland, she was moved by a deep sense of nativity and respect for her own land. She understood that the place which she belonged to had rich cultural heritage and offered her so much to learn. Once she returned to Mumbai, after giving it a thought about how to embrace and promote the culture, history and heritage of her land, the thought of Otsü took roots which were later brought into action after she moved back to Nagaland.

"We have a vibrant history and culture. We should be extremely proud of where we come from and must represent it. Following western fashion and lifestyle is not the issue but forgetting our roots is.", She says.

What More In Her Basket?

Jamir, who completed her schooling at Patkai Christian College in Dimapur and graduation in Fashion Communication at the National Institute of Fashion Technology (NIFT) in Mumbai, hit the world of Indian cinema with the movie 'Axone' in 2018 and received good response post its release.

One year after its release in the October of 2019, even to date, the movie has made its mark giving the North-east fragrance in the Delhi backdrop. She has also been into the advertisement industry and TV commercials to earn a living. Her test shoots were also published in an international fashion magazine, Ellements Magazine.

Fashion from The Indian Perspective:

Jamir says that in India consumers often feel that sustainable and ethical fashion is expensive. People still go for "pay less, get more" type of collection rather than investing in a good quality piece. However, this mindset, she says is slowly but considerably changing. Indians started realising the value of sustainable fashion and are accepting it quite well according to her.

"Some people are becoming more mindful of their purchases and that’s a great start," she says.

It's often quite rare that we find people connecting career with a cause. Their career choice not only benefits them and the people around but also brings a huge impact to the planet as well. Jamir's idea of fashion gave way to building a fashion brand of her own, introduced the rich culture and history of Nagaland to the world along with being kind and affectionate towards the planet. Kudos to the creative and causative thought of this young woman. Jamir! May you rise higher and shine brighter!!