Lately, we have been reading about swimmers who are setting records by chasing all the challenges that come along their way in the choppy waters. This is yet another story of an open water swimmer from Nagpur who has indeed broken the record set by another ace swimmer. Let's know about the swimming champion from Nagpur, Jayant Jaiprakash Duble who has set a record of becoming the second fastest person to swim across the Palk Strait.

Jayant Jaiprakash Duble is an 18-year-old who hails from Nagpur and is pursuing the first year of his BPE course at Jyotiba College of Physical Education, Nagpur. This member of Dolphin Swimming Club, is also an NCC Naval Cadet. This champion of waters has completed the world's longest 81km swimming competition in the Bhagirathi River and stood seventh. He recorded a swimming time of 12 hours and 29 minutes. He has also become the first person to swim the new 24km and 27km route at an Open Water Swimming Competition held in Goa in a short span of three days to enter India Book of Records. 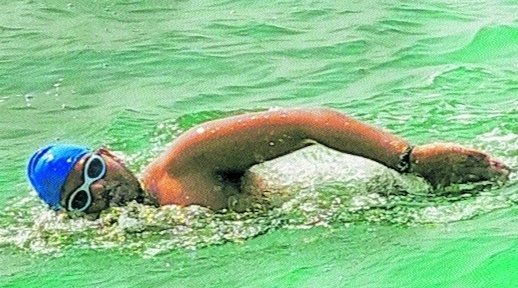 Duble, on 26th March, 2021, swam across the Palk Strait by covering a distance of 29km between Talaimannar (Sri Lanka) and Arichalmunai (Dhanushkodi, India) in 9 hours and 20 minutes. He started his expedition at 2:25 am on 26th March and completed the feat around 11:45 am the same day. This expedition was organised by the JD Sports Youth Foundation and the National Institute of Swimming (NIS) under the supervision of the Swimming Federation of India (SFI) with a motive to foster friendship between Sri Lanka and India, to promote the Fit India Movement and create awareness towards Drowning Prevention. 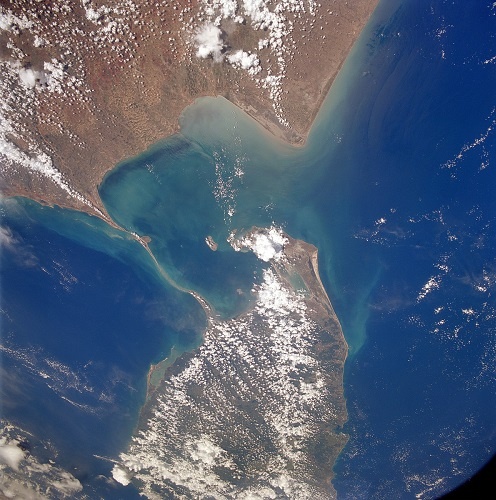 Lt. Col Puneet Sushil of the Indian Embassy at Colombo and the Admiral of Sri Lankan Navy flagged off the event. The technical support and time recording was done by Gulf of Mannar Promotion Association, Tamil Nadu, India. The Defense Advisor Captain Vikas Sood and Section officer Shambhu Kumar Suman and Sri Lankan Navy Officers extended their best wishes to Duble for the expedition. The Union Minister Nitin Gadkari helped in obtaining clearances from Sri Lankan Government and NOC from concerned Union ministries. After all the things were set, on March 25, Jayant, along with his coach and father Dr Jaiprakash Duble and mother Archana Duble, observer Mariya Roger appointed by Swimming Federation of India, lifeguards, crew members, kayaker in two boats went from Rameswaram to Talaimannar and stayed at the allotted point by Sri Lankan Navy till the expedition started. He started the expedition at 2.25 am on March 26, the time at which the Strait was pitch dark. Duble set his target in the beam of torch light and dived into the waters. There was high tide and strong winds blew. The pilot boat directed Duble on his route. Duble, who was well trained by his father and coach, didn't care for the sharks, poisonous snakes, jelly fishes and other marine creatures on the way. Though the weather was humid and cloudy, Duble went ahead. Until Duble reached the International Marine Border Line (IMBL), the Sri Lankan navy boats followed him. Due to the sand bars present in his route, Jayant's actual 29km distance to be covered rose to more than 36km. Finally, after crossing all the hurdles, Jayant reached the the finishing point Arichalmunai (Dhanushkodi) where he was felicitated by Custom and Immigration Department officials and office bearer of Gulf of Mannar Promotion Association, and Jayant’s family members Madhukar Adhao, Malti Adhao, Ashish Adhao, Ashwini Adhao, Anushree Adhao and Aryan Adhao.

"I was consistently working hard for this swim expedition. Palk Strait Swimming Expedition was my first international event and was challenging for me to swim in deep dark Strait in midnight but with continuous motivation and strength given by my father Jaiprakash Duble and mother Archana Duble, I was successfully able to complete this expedition. I am thankful to all the well wishers for support and best wishes.", he told in a statement. 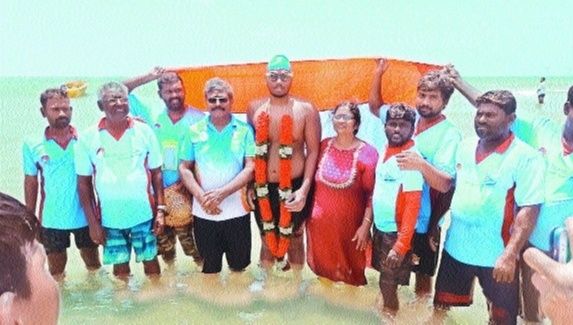