We do come across such words, as Jeeva Samadhi, being inscribed on certain revered tomb spots, with little knowledge of persons who are interred in them and the extent of their spiritual evolvement and yogic attainment and the significance of it.

Jeeva refers to life or living. Samadhi literally translates to balanced or equanimous intellect. ‘Sama’ in Sanskrit refers to stable, poised and ‘dhi’ refers to Buddhi or intellect more specifically benign intellect (useful or helpful to others).

Mind gives rise to a set of habituated thoughts derived from the understandings that we have acquired over a period of time peculiar to our environment and experiences.

Samadhi is understood in yoga as going beyond or transcending the mind and intellect. Attaining and experiencing this state is equally important, which is possible for regularly practising sadhaks, who can also scale higher levels in Samadhi, over a period of time with constant practice.

Sadhaks or yogic practitioners understand the limitations of the physical body and therefore strive to extend their being beneficial to others beyond a lifetime by extending help to steer others in their spiritual evolvement, by going into jeeva Samadhi.

This requires intensive sadhana performed in conducive surroundings and requiring the assistance of others, to wall them up in specifically designed tomb like structures, which in common parlance, is called as Samadhi. The sadhaks practice advanced pranayama techniques and are able to sustain life by pausing their breath and heart rate and other functions of the body. They continue in this state of intact prana which is sustained by cosmic energy.

Legally, this process of Jeeva Samadhi is considered to be the same as suicide, and police officials have opposed such acts. However, there are certain cases where the sadaks were able to convince the concerned authorities through medical tests, where in, they were able to come back to life even after shutting down the breathing and heart beat, for a demonstrable period of time. Thus, some have been able to attain Jeeva Samadhi in the presence of such officials and doctors. They generate positive energy from inside the Samadhi.

A glance of Jeeva Samadhis in Karnataka and Bengaluru

One very prominent Jeeva Samadhi is at Mantralaya, which is that of Miracle Guru Sri Raghavendraswamy (1671). He was a religious scholar, theologian and saint. Innumerable incidents of miracles are revealed by his disciple.

Another such example is that of Thinthrini Mouna Guru Swamy, in the erstwhile Doddakunte Village, which is now part of Cox Town, in Bengaluru. He was hailing from Thinthrini, in Gulbarga district of Karnataka. He had come to a disciple’s house in the present Samapangiramanagar, Bengaluru around 160 years ago, when he was invited by a prominent person of Doddakunte village to make Doddakunte his abode. This very spot is now called as Sri Thinthrini Mouna Guru Matalaya in Cox Town. He attained Jeeva Samadhi in the year 1872, at the very same spot, in the presence of officials, doctors and his disciples.

There is a very interesting fact about him. It is recounted, in many well researched books that the same person had attained Jeeva Samadhi in Thinthrini, Gulbarga and had also reappeared in other places where his Samadhis are still revered. He was a secular saint and is equally respected by people belonging to all castes, creeds and religions and was considered a ‘Weaver’ of the fabric of society.

He is reported to have even visited Mecca, for a pilgrimage in those days, before his attainment of Jeeva Samadhi at Cox Town. He was initially not given permission to enter Kaaba, by the then reigning authorities of the place. It seems that after their refusal, he sat outside and was meditating; but the authorities were highly surprised to find that no other pilgrim was able to enter the holy place, during this time. They then understood that it was because of the extraordinary powers (Siddhis) of Mouna Guru and appreciated his attainment, and in recognition of which, he was later felicitated with a copper anklet medallion bearing the seal of the authorities of the place. This is still treasured by the descendants of his disciples in Bengaluru.

Another such Jeeva Samadhi event with little known history is at Jeevanahalli which is situated only 1.5 kilometers from Cox Town on Park Road end of Jeevanahalli. It is the Samadhi of Sri Sivaramaprabhu a person who had migrated from Andhra Pradesh and incident of Jeeva Samadhi reportedly took place more recently about 50 years ago. In his case also he was denied permission, but he was also able to convince the authorities to accord permission and then went on to attain Jeeva Samadhi in their presence.

A very strange incident is recounted about Sri Sivaramaprabhu, by a meditation group of the Simplified Kundalina Yoga order, who were meditating in a satsangh at a meditator’s place in Jeevanahalli, when an old man appeared in meditation to the person leading the satsangh and beckoned them to assemble at his Jeeva Samadhi place, for their future satsanghs which was nearby. This group searched all over the local area and found the spot a few hundred metres away and the man in the picture at that place was the same person who had appeared in meditation to the Yoga Acharya who was leading the satsangh at the meditator’s place.

After which, the weekly satsanghs of the group are being regularly held at the Jeeva Samadhi hall in the ‘presence’ of Sri Sivaramaprabhu is guiding the disciples and many miracles have been recounted to have happened in their lives after assembling at his Samadhi spot for Meditation.

Another very prominent Jeeva Samadhi is that of Mahan Swamigal at Odakkatur Mutt, situated near Neelakantan Circle, behind Thiruvallavar statue opposite Halasuru Lake, in Bengaluru. There are many more in Bengaluru. 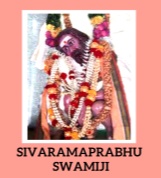 There are hundreds of Jeeva Samadhis in Karnataka, and like numbers in other States like Munuswamy Jeeva Samadhi (400 years ago) & Sri Thadilara Swamyigal, very prominent in Chennai, Tamil Nadu and Pothuluri Veera Brahmendra Swamy (1690 AD) of Kaalagnana Tatwa fame and other hundreds of saints of Andhra Pradesh.

In other parts of the world, Tombs are found, which have relics of body parts of Saints, that are held to be holy and many have experienced miracles happening at such places.

Some Samadhis are designed and constructed as per the specific instructions of the saint and many in stepped Pyramid forms (with specified inclined angles and direction orientation). The Pyramidal structures enhance the inner energy generation. The ones that are constructed for Vaishnavaite saints are called as Brundavan and those erected for the rest are called as Adisthanam.

Regular Yogic Practitioners are energy sensitive and are able to experience the tingling of the body due to energy emerging and spreading at such places, some of which are high and some with low intensity, depending sometimes on the number of years of time elapsed of the Samadhi, though in some cases, it would generate energy for un- specified years. The author himself has experienced such energy generated in some Jeeva Samadhi spots.

Some saints, from their Samadhi sthals or places have performed innumerable miracles of healing, guiding and propelling disciples & sadaks in their sadhana, enabling assembly of disciples in regular bhajans, chanting, Anna Prasad or consecrated food partaking.

Surprisingly almost all Jeeva Samadhi saints were secular and eradicators of caste & creed, and transcended religion.

Providing some Answers to the Eternal Quest of Who Am I

Most people spend lifetimes, not realizing their true nature. Yoga and other eastern oriented practices are directed to make the sadaks, to experience who they really are.

Jeeva Samadhis apart from being positive energy generators are also concrete symbols of the immortal and expansive nature of man, thus providing some very practical pointers of life. Therefore, in conclusion, the following Yogic prayer expresses it all:

Tamasoma Jyothirgamaya(Ascendance from Darkness to Light).

(The author is a Yoga Acharya and Chief Advisor at Svasti Wellness Centre & Academy and can be contacted at 8147063631 or at asanmurali@gmail.com).

Read more about him: https://bookofachievers.com/articles/lifestyle-change-is-a-must-heres-why-explains-this-yoga-guru