The temple that casts no shadow! Here's what you need to know!

If you are planning to visit temples in India, do not forget to add the Brihadeeshwara temple in Tanjavur, Tamilnadu to your list. Not only that the temple is a mark of reverence to Lord Shiva, it also speaks loud about the achievements of Chola kings, in terms of their high architectural skills as well as their power and valor. Tanjavur, famously known as the Rice Bowl of Tamilnadu, houses this ancient temple that was built one thousand years ago. Along with being one of the most ancient structures of India, this temple presents several distinctive aspects and that's why it is named as the UNESCO World Heritage Site.

The temple is a signature of the greatest Chola architecture. Prominently known in the inscriptions as Dakshina Meru, King Rajaraja Chola I laid foundations to its construction in the 11th century. The construction started in 1004 CE and completed by around 1009 CE. It just took close to around five years to build this massive construction, that too, 1000 years ago. Read on to find more fascinating aspects about this temple. 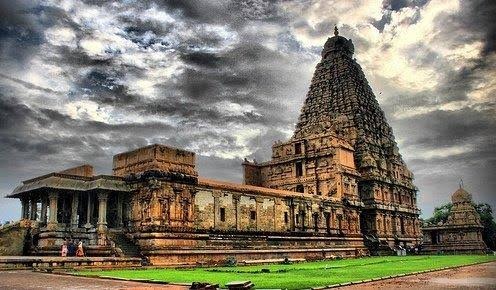 The sanctum stands at the centre of the rear end of a big rectangular court. The temple enshrines India's highest Shiva Linga whose height is 3.7m and width is 5m. Infront of the Shiva Linga, a huge Nandi can be seen which is 2.7m in height and 2.7m in width. The complete Nandi is built using just one stone weighing 20 tonnes. The temple rises to 13 talas or floors and has an octagonal Shikhara. With this, this temple became the only ancient Indian structure with 13 floors. The temple has the sculptures of almost every Hindu god intricately designed on it. To build this temple, no bricks, no cement or cement stones, no regur soil or no iron was used. The whole temple right from the foundations to the Shikhara was constructed only using granite stone. Based on the size and mass of the stones, the temple was built by arranging one stone on the other.

Where Was The Granite Brought From?

Well, as it was mentioned earlier that the temple was built using just granite stone, allow me to tell you that this stone was not available anywhere upto 100km around the temple's location. Where did the architects get granite from? It was observed that granite was quarried from two mountains which are located in the Pudukkottai region, 150km away from the temple's location. To transport this granite to a distance of 150km to reach the construction site, that too 1000 years ago, when the technology and transport facilities were less than minimum, what would have been the means? Though this remained as an unanswered question to the historians even today, some studies opine that elephants were used to transport the quarried granite.

Hats Off To The Workmanship:

The temple's Gopura Kalasam was constructed using just a single black stone that weighed 81.28 tonnes. Now again, here comes a question. How was this massive structure placed on top of the temple in that era? Studies revealed that to place the Gopura Kalasam, the engineers, masons and workers had to sweat tirelessly. They used their genius in accomplishing the task. They constructed a slanted bridge that ran from a village, 7km away from the temple to the point where this Kalasam has to be placed. Using this bridge, the Gopura Kalasam was transported and placed on the top of the temple. This temple was brilliantly built keeping in mind the rules of sound to eliminate noise, echo and reverberation.

Does The Temple Cast No Shadow?

It was spread through a whispering campaign that the temple casts no shadow or the shadow of the temple doesn't fall on the ground. It was told and believed that the temple was constructed so skillfully that its shadow doesn't touch the ground. Some people also say that it's a magical power. But, will there ever be such construction which doesn't cast a shadow? To this, there's a small background story. After constructing the temple, the king called for the chief architect and asked, "This massive structure wouldn't fall down in any case. Will it?". As an answer to the king's question, the expert Stapathi said, "Raja, even the shadow of the temple wouldn't fall to the ground".

Let me tell you something that speaks loud about the architectural skills of the Chola times. The height of this temple is 60.96m. Though it was built 1000 years ago, it didn't lose its strength, shine and mightiness till date. Any construction loses its magnificence with time. But Brihadeeshwara temple doesn't fall into this basket. For example, U.K's Big Ben tower was built between 1843-59 and is around 96.3m in height. That means it was built around 150 years ago. But, it tilted to around 0.26 degrees from the time of its construction. Likewise, the Leaning Tower of Pisa was built between 1173-1372 and bears a height of 56.7m. That means it was built some 800 years ago. This structure too, tilted at 3.99 degrees to this day. A couple of other structures around the world which were built many years after the Brihadeeshwara temple was built, also have lost their original shine and strength. As the time passed, they all have tilted to some angle but Brihadeeshwara temple is still standing tall, strong and without any wear and tear. It serves as a proud example of the calibre of ancient Indian workmanship and civil engineering skill.

When in 1954, the most expensive Rs. 1000 note was printed and released by the government of India for the first time, the image of Brihadeeshwara temple was printed on the note.

Brihadeeshwara temple is worth visiting for its magnificence, splendor and the teachings it serves on our plate owing to its rich history. One best way to get lost in the lap of spirituality along with learning the aspects of ancient Indian expertise and technique, is to visit this shrine. Don't miss. There are road, rail and air connectivities to reach Tanjavur from different parts of India. If not, one can reach Chennai from anywhere easily and from there, a journey of close to 350km is not a tiresome one!!