The building skills of ancient and medieval India - the hanging pillar of Lepakshi temple.

Legend goes this way - When Ravana, the king of Lanka, abducted Devi Sita, a bird named Jatayu fought a fierce yet futile battle with him in order to save Devi. Jatayu, who was wounded badly in the fight falls down on a piece of land. When lord Rama who sets on in search of his wife Sita reaches the place where Jatayu falls down, he looks at the bird and says, "Le Pakshi" (Arise, bird). Thus, the place came to be known as Lepakshi ever since then. 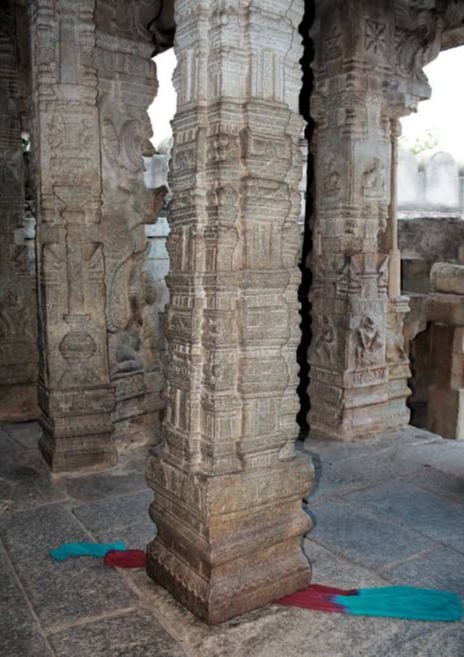 This place, Lepakshi, is home to magnificent Veerabhadra temple built in 16th century. This temple is also called as the Lepakshi temple. In the Anantapur district of Andhra Pradesh, India, at around 15 km east of Hindupur and close to 120 km north of Bangalore, in the village of Lepakshi, is where this temple is located. Major part of the temple is built on a low, rocky hill called Kurmasailam. The hill is in the shape of a tortoise (Kurmam in Telugu), so the name.

The Artistic Excellence of the Vijayanagara Empire:

Lepakshi temple was built by two brothers named Viranna and Virupanna, the Governers in the kingdom of King Achutaraya of the Vijayanagara Empire. The construction reflects the typical Vijayanagara architecture. What can be told about the features of the temple? A 24ft by 14ft fresco of Veerabhadra, the fiery form of Lord Shiva is made on the ceiling of this temple. This stands as the largest fresco in India. A huge structure of Nandi carved out of a single stone is seen at the front of the temple which is also considered as one of the largest in the world. The temple features numerous sculptures of gods, goddesses, artists, dancers, musicians and saints etc. with hundreds of paintings depicting stories from the Mahabharata, the Ramayana and the other Indian epics adorning its walls.

One fascinating aspect of this temple is its most famous hanging pillar. One of the 70 pillars hangs from the ceiling with its base not touching the ground. Objects like thin sheet of paper or a cloth piece can be passed from beneath the pillar. To understand how this was made possible and to know the secret of its support, a British engineer tried to move the pillar but remained unsuccessful. Not only him, no other thinking-head could explain the reason behind the structural marvel of the hanging pillar till date. This pillar undoubtedly stands as a tribute to the engineering genius of the builders of ancient and medieval India.

This standing example of ancient architectural and artistic splendor is a must-go place for anyone. It is both a visual and cerebral feast.