The bliss of Shivratri offered by Isha.

Maha Shivaratri, the biggest celebration of the marriage of Lord Shiva and Devi Parvati was carried out in various parts of India and across Hindu communities in the world on 1st March, 2022. Of them, the spectacular event held by Isha Foundation under the supervision of Sadguru in Coimbatore is definitely worth appreciating. The night is not just about keeping oneself awake but is one of the most significant opportunities to discover the path to enlightenment. Meditation and mindfulness are what constitutes the night, if practiced, every day through out one's life, makes the individual wholesome. While numerous people join the event to witness the grandeur of the night, talents from across India and the globe take part in this event to present their artistic brilliance on the biggest spiritual platform. The night doesn't just confine to the realms of spirituality and religion, it is an amalgamation of wisdom, self-love, self-understanding, appreciating the goodness of diversity, clapping for outstanding talents and much more. Starting from 6pm on 1st March, the event continued for 12 hours, until 6am on 2nd March, 2022. Here's what this event has presented to the world this time - the 28th time in a row!! 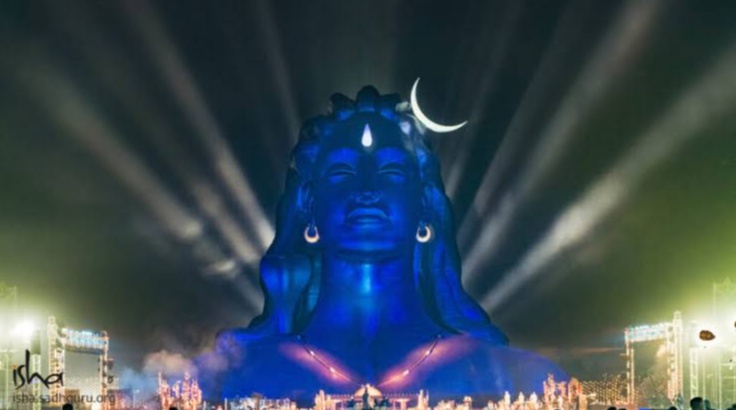 The splendid evening started with Linga Bhairavi Maha Yatra. Men and women divinely dressed in white and red carried out the Linga Bhairavi Maha Yatra with utmost devotion and reverence, assimilating the vibrations of devotion into every spectator's nerves. The Maha Yatra sent spiritual shivers down the spines of the viewers. The Maha Yatra was followed by Pancha Bhoota Kriya by Sadguru where the Dhyana Linga was showered with saintly offerings by Sadguru and other devotees. The place was filled with a variety of oil-lit and camphor lamps, small and big, huge and elegant. The halls reverberated with energetic chants and high-spirited music which devotees dipped themselves in. The main aim of Pancha Bhoota Kriya is to cleanse the five elements in human system. Participating in this powerful process ensures stability in an individual, providing mental, physical and emotional well-being, paving way to one's success. Linga Bhairavi Maha Arati was the next program of the evening after which Sadguru lighted up the Maha Yoga Yagna, the prime motto of which is to take the goodness of powerful yoga practices to the reach of everyone. It calls everyone to practice and preach Yoga for the overall physical and mental well-being of human kind. After igniting the Maha Yoga Yagna, Sadguru went on to address the people present there as well as everyone who is watching the event from across the globe.

The evening then proceeds to a massive ground where the rest of the night is ready to mesmerise the world. It is adorned with bigger than a massive stage with the peaceful idol of Aadi Yogi (Lord Shiva) offering bliss to the people and environment around. The place is decorated with colourful flowers, lamps, elegant works of art and glittering lights. With songs of praise and worship, with numerous musicians dancing their fingers on a variety of instruments, the evening started with soulful and lively music. Renowned artists from across India like Sandeep Narayan, Papon, Master Saleem, Hansraj Raghuvanshi, Karthik, Mangli, and Sean Roldan mesmerized the audience with their diverse talents. Music presentations by Sounds of Isha, and dance performances by Isha Samskriti have left the spectators jaw-dropped. The celebrations marked the beginning of spring in what was considered as the last cold winter night. Midnight meditations have filled the ambience with refreshment while the Adiyogi Divya Darshan is beyond words and expression. One has to feel it all.

The whole event was live-streamed in 16 languages and millions of devotees from across the world glued to their television sets to witness the grand night. On the whole, the event gives a lot to take home. While one immerses oneself in the juices of devotion and spirituality, there is a lot more to it. The effort behind the arrangements, the artistic brilliance of the planners, the organisational intellect, the talented artists and the commitment of every individual involved directly and indirectly in making it a grand success -hats off to everyone! Must to experience.