The basilica that stood the test of time!

One of the eight basilicas in India is located in Fort Kochi of the southern Indian state, Kerala. This write-up brings before you, the magnanimous church that has a 500-year old history dating back to the arrival of Portugese in India in 1500. It is the Santa Cruz Basilica in Fort Kochi of Kerala. 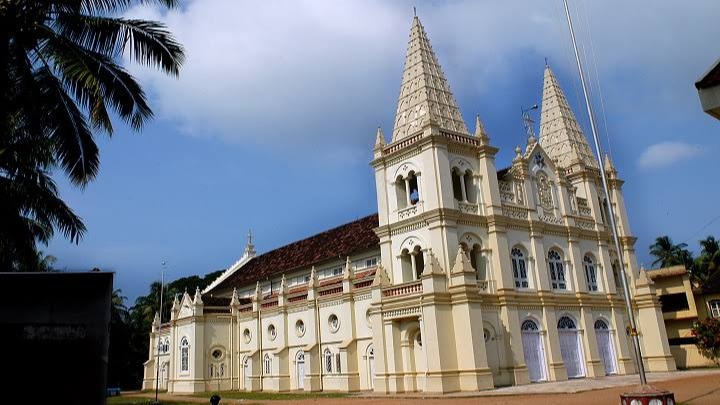 In 1500s, when the Portugese rendered their help to the King of Cochin in defeating the Zamorins of Calicut, the king, as a mark of gratitude, gave permission to the Portuguese, to set up a fort. In the year 1505, permission was given to the first Portuguese viceroy, Dom Franciso de Almeida, to build a church. Later in 1558, Pope Paul IV raised the church to the status of a cathedral. However, when the Dutch conquest of Cochin happened in 1663, most of the Catholic establishments and monuments were destroyed. However, the Santa Cruz Cathedral was untouched as it was the armoury of the Dutch. But during the British invasion in 1795, one of the decorative granite pillars of the destroyed church is preserved as a relic in the basilica. In 1887, Bishop D. Joao Gomas Ferreira who reached Kochi, took initiative to renovate the cathedral. Thus, following the reconstruction, in 1905, it was re-consecrated by the bishop of Damao, Dom Sebastiao Jose Pereira. In 1984, Pope John Paul II raised the status of the cathedral to a basilica.

The Magnificence Of Santa Cruz Basilica:

The basilica provides a visual and spiritual treat in its Indo-European and Gothic architecture. The mix of colours used in it add immense grandeur to its look along with he pastel-coloured interior and the paintings done by the prominent Italian painter Brother Antonio Moscheni and his disciple De Gama of Bangalore. The Basilica has two bright lofty spires. Moscheni has painted on the theme of ‘The Passion and death on the Cross’ in the altar of the Basilica. His portrayal of Da Vinci’s ‘The Last Supper’ is a jaw-dropping one. The frescos and murals on the life of Christ are embellished on the ceilings and the interior. The stained glass windows add to the glory and grandeur of the basilica. Who would forget the bright blue pillars at the entrance and the pulpit for, they speak about the craftsmanship of the architects!

Santa Cruz Basilica is a must-visit place when you have a list of spiritual places to visit in Kerala. Don't miss it.