Need a transfer in your job? Off to Ryali then!

In Hindu belief system, men and women are given equal place. Forget about what happens in reality, but when legends are closely observed, in many of them, it is depicted that 'Purush' (man) and 'Prakriti' (Woman) should go hand in hand for a hassle-free existence of mankind on earth.

While the concept of 'Arthanaareshwara' is commonly found in paintings and pictures, a temple reflecting this concept was built in a village called Ryali in the East Godavari district of Andhra Pradesh where lord Vishnu is seen in unique form. It is the Jaganmohini Keshava Swamy temple. 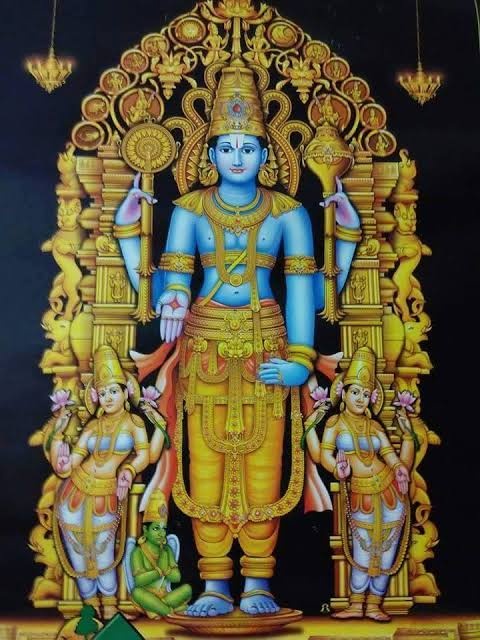 The village Ryali is located at 40 Km from Rajahmundry, 74 Km from Kakinada and 34 Km from Amalapuram. It is situated between the rivers Vashista and Gautami, the tributaries of river Godavari. The area is also known as KonaSeema, well irrigated area of Andhra Pradesh, thanks to the tributaries of river Godavari flowing here. This is exactly where, in the nature's green lap, the most famous Jagan Mohini Kesava Swamy temple is located.

It was 11th century when the village was a part of the wild forest and was under the rule of Chola kings. Raja Vikrama Deva who ruled these regions, once came to this place for hunting. After hunting for quite sometime, he took shelter under the shade of a tree where he fell asleep and saw a dream in which Lord Sri Maha Vishnu appeared. Lord Vishnu informed the Raja that his shrine is located in the under ground of that area and also suggested how to locate the shrine. He asked the king to pull a wooden chariot in the region and said that the place where the nail of the chariot falls, is where the shrine can be found, under the ground. Raja woke up from sleep and set to do as per the dream. To his surprise, when he excavated the land where the nail of the chariot fell, he found an idol in the underground. Thus in 11th century, he built a small temple. In the year 1936, the temple was renovated.

With a 5 feet height and 3 feet width main idol, the temple of Sri Jagan Mohini Keshava Swamy is made up of single stone which is termed as Salagrama Ekashila. The idol of the main deity is a distinctive work of art. On one side of the idol, the face of Lord Keshava is sculpted. His idol is carved stunningly where lord Keshava is seen with four hands holding a conch and a discus in the upper pair of his hands while he holds a mace and Mandhara mountain in the lower pair of hands. At Lord's feet, Goddess Ganges is carved in the sitting posture and water (Akasha Ganga) flows touching the lord's feet. Around the sculpture, the idols of Sridevi, Bhu Devi, Narada, Adi sesha, Garuda, Kinnera and divine damsels like Rambha and Urvashi are carved. The water that flows from the feet of Lord Keshava is considered holy and is sprinkled on the devotees. This is just one side of the amazement.

On the rear side of the Lord Keshava's idol, the structure of Jaganmohini is carved. Her hair is folded into a bun and she is adorned with glittery jewels. Her divine idol is seen with slender waist and rounded hips. This is one-of-a-kind sculpture that is seen only in Ryali.

It is common that a variety of beliefs are attached to the holy shrines that take strength based on people's experiences. Likewise, it is believed that those who seek transfer of place in their jobs can get their wishes fulfilled by visiting and offering prayers to the deity at the Jagan Mohini Kesava Swamy Temple. This belief has gained enough weightage with the positive experiences of numerous people.

Rest everything aside, one should visit this beautiful place that swings its guests in the pleasant lap of nature, offering them the warmth of its people. The temple's rare sculpting features and architecture will touch one's heart for sure! Where else can we find an idol reflecting two divinities?